More often than not, 30-year-old rookies and 30-year-old journeymen don't find success at the major league level. However, Robinson Chirinos and Rene Rivera are breaking the norm with their electric arms.

Share All sharing options for: Robinson Chirinos and Rene Rivera

Robinson Chirinos, the incumbent Texas Rangers' catcher, has been put in charge behind the dish after multiple failures by preseason-favorites Geovany Soto and J.P. Arencibia. That's mainly because Chirinos possesses an incredible throwing arm that he's been using to mow down opposing would-be base-stealers. Even though his offense will never win any awards with a .290 wOBA, his defense more than makes up for it, accumulating a total 1.2 fWAR in 66 games (20th among catchers with more than 100 plate appearances).

Fifty-five batters have attempted to steal while Chirinos is watching and 23 of them have been caught in the dust, making for a 41.8% caught-stealing percentage, 5th among all qualified catchers this year. Among other awards, Chirinos is tied for first with four stolen base runs saved (rated between great and excellent according to FanGraphs) and tied for fifth among all catchers with five defensive runs saved.

His arm is the contributing factor when it comes to his defensive value because Chirinos isn't known for his pitch-framing ability. Therefore, it's unfair to say he is among the best defensive catchers in baseball. What is fair to say; however, is that Chirinos is among the best catchers when it comes to his arm. Just like how prospects are graded differently based on their throwing arm and fielding ability, major-league players are done the same. Chirinos has above average glove-work but his arm strength and fluid ball-transfer times are what separates Chirinos from other catchers.

To look hands-on at his arm strength and pop times, I've included a sample of one of Chirinos' throws. This play was pretty recent, occurring on July 11th when Erick Aybar was caught stealing with Howie Kendrick at the plate. As you can see, Chirinos has a great ability to move the ball from his glove to his throwing hand and possesses the arm strength necessary to get the ball to second in time.

After taking some probably-accurate-enough stopwatch times, I've measured the time taken for the ball to get from Chirinos' glove to Elvis Andrus' glove. That average time is 1.77 seconds (note: the GIF format will slow down the actual play. Here is the full video). Given that the average major-league pop time is around 1.90-2.00 seconds and plus times begin at 1.85 seconds, 1.77 must be considered plus-plus.

One way or another, Robinson Chirinos is making an impact in Texas because of his defensive ability. Not only can he be a major-league player, but he can be a defensive-reliant backstop capable of holding down an everyday job. This 30-year-old rookie may not be in the conversation for AL Rookie of the Year, but he should be the favorite to win AL Defensive Rookie of the Year (if such an award existed). 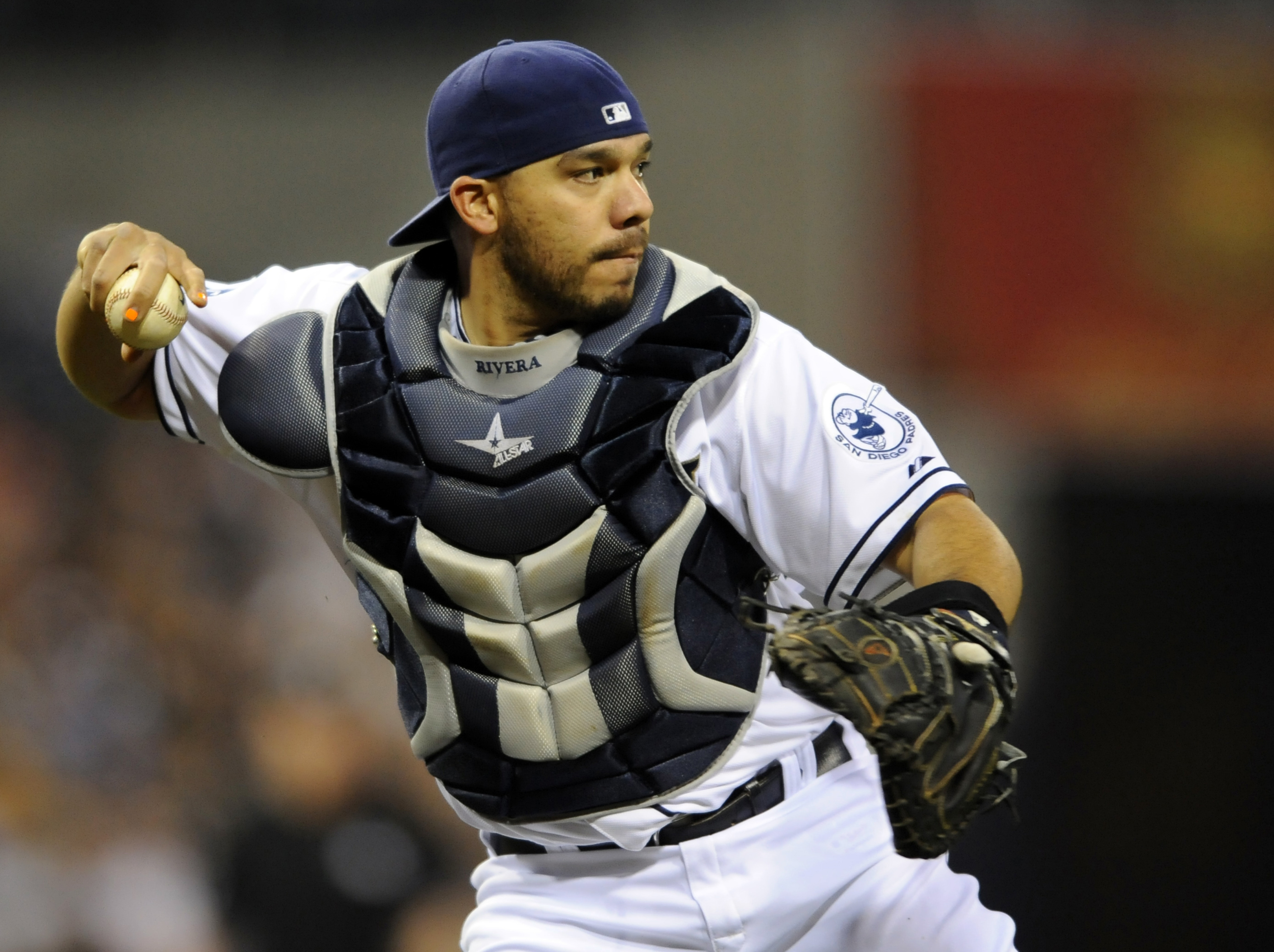 Rene Rivera has come a long way to get to where he is today. After being drafted by the Mariners in the 2001 draft, Rivera advanced through the system quickly and arose at the major-league level in 2004. After three plate appearances, he was sent back down and brought back up in 2005 to a smattering of 16 games. Ultimately though, Rivera disappointed in 2006, struggling through 99 at-bats with a .437 OPS.

How Many Games Would an All-Defense Team Win?

Not all elite defenders are elite players, but a team with the most elite defender at every position would still win a lot of baseball games.

Managing Editor Bryan Grosnick makes the case for Yan Gomes as the deserving starter at catcher for the AL in this year's All-Star Game. In video format, no less.

How Many Games Would an All-Defense Team Win? Sabermetric Minute: Yan Gomes

After being dunked back into the minor-league waters, Rivera journeyed through the Mariners, Dodgers, Mets, and Yankees' systems before resurfacing with Minnesota in 2011. Again, more weak play by Rivera led to a small stay as backup catcher, and he was ousted of the job in 2012. After signing with San Diego in 2013, Rivera played minimally but showed enough skill to warrant a stay with the Padres. This season has been a breakout one for Rivera, who has performed well enough as backup catcher to accumulate 1.4 fWAR.

His defense, while not as good as Chirinos, has been superb so far. Fifty-five batters have challenged Rivera and 20 of them have been gunned down, leading to a 36% caught stealing percentage. Even though Rivera is labeled as the backup catcher in San Diego, he has received ample playing time because of Yasmani Grandal's injuries and lack of production. Therefore, it's even more impressive that Rivera has been able to compile 39 assists and such a great caught stealing ratio. As a result, Rivera is second in the MLB among catchers in range factor per nine innings. Additionally, Rivera is also tied for first with four stolen base runs saved and tied for fifth among all qualified catchers with five defensive runs saved.

Just like Chirinos, Rivera has been able to field the ball so well because of his fluid pop times and his solid arm strength. I've provided an example of one of Rivera's better plays where he catches Eric Young Jr. trying to steal second base. This play also happened recently on July 19th.

After taking in a 94 mph two-seam fastball at the bottom-left handed corner of the zone, Rivera beams it to Alexi Amarista covering second base. Firstly, it almost appears instantaneous when Rivera transfers the ball from his glove to his throwing hand. Secondly, he throws the ball with enough force to reach second before Young does. Both of these well-versed actions contribute to a failed stolen base attempt. My own stopwatch readings clock the pop time to be around 1.78 seconds. As far as pop times go, 1.78 seconds is excellent.

Given more playing time, I believe Rene Rivera can succeed as a starting catcher because of his defense. Seeing how poorly Grandal has played in 2014 makes me believe that Rivera will be given a larger share of playing time going forward. As for 2015, I have a feeling their roles may be reversed, with Rivera acting as the starting catcher and Grandal close behind.

Chirinos and Rivera are similar players in more ways than one; 30-year-old players having a breakout campaign on lackluster teams with subpar offensive statistics. What stands out though is their defense. The batteries in Arlington and San Diego have seen a major upgrade with their respective catchers behind the dish.

All statistics courtesy of FanGraphs, Baseball Savant, and Baseball-Reference.