The rise of the empty bullpen

The Cubs needed nine pitchers (including an inning from their backup catcher) to beat the Rockies Tuesday night. How rare are those games?

Share All sharing options for: The rise of the empty bullpen

Tuesday's game between the Cubs and the Rockies was the longest game (by time, at least) in the Cubs' 138-year history. Like most 16-inning affairs, this game produced its share of fun facts. Near the top of the list, though, was John Baker. The Cubs' backup catcher became the first position player to pick up a win on the mound since the Orioles' Chris Davis did it against the Red Sox in 2012.

Not everyone had fun, though. Sports Illustrated's Joe Sheehan took to Twitter after the game to write,

Because it's worth repeating: the #Cubs are carrying THIRTEEN pitchers, yet need a position player to pitch after just FIFTEEN innings.

But position players pitching just isn't as rare as it used to be. Baker wasn't the first position player to get a decision this season. In fact, he wasn't even the first in Chicago to do it: White Sox utility man Leury Garcia picked up the loss in a 14-inning affair against the Red Sox back in April. And that was only 13 innings in!

These games are becoming more common, however. With the help of Baseball-Reference's Play Index, we find that there have been 680 games since 1914 where at least eight pitchers took the hill. Before 1990, there were at most a handful of such games per year. But after the A's won their third straight American League pennant on the strength of Tony La Russa's specialized bullpens, the number of such games skyrocketed, as the graph below shows. From 1914 through 1985, eight or more pitchers appeared in a single game only 60 times. Last year, it happened 62 times. 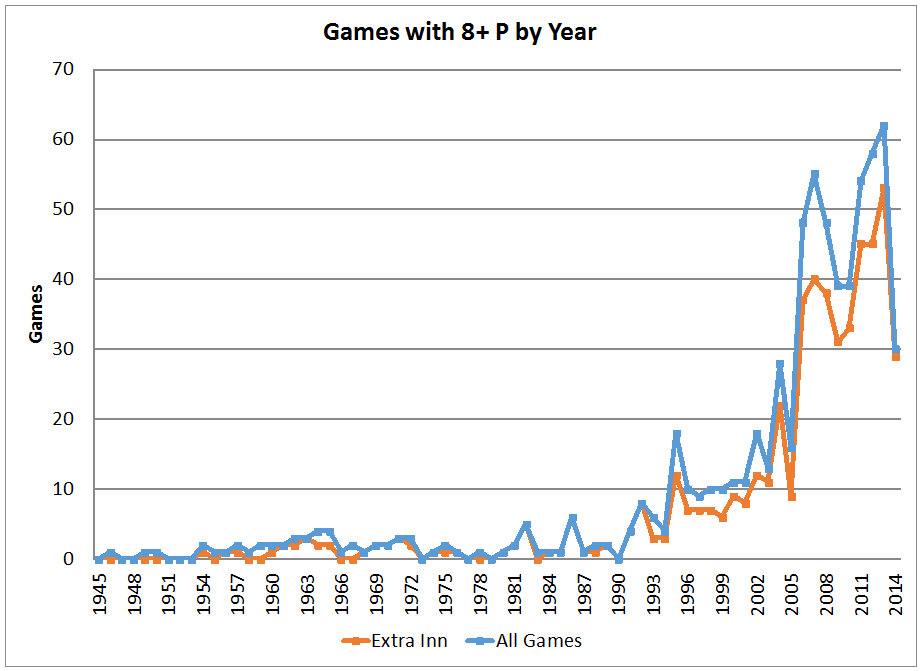 But hang on. Before we waste too much energy complaining about coddled pitchers and neurotic managers, let's make sure there's nothing else going on here. Here are the number of games with at least eight pitchers, broken down by month.

Now we see that 317 of these games -- nearly half -- happen after September 1, when rosters expand to 40 players. The extra arms make managers less reluctant to pull a pitcher during a blowout, producing more of these games than usual. Let's try that again, this time excluding all games after August 31st. 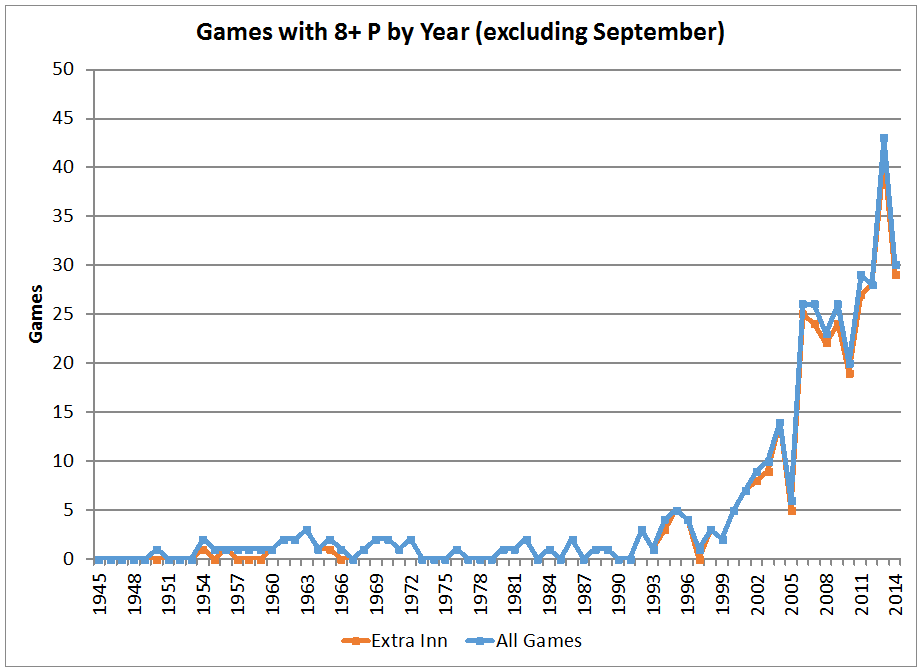 We're left with 363 games since 1914, 93 percent of which went into extra innings. We still see the same hockey stick shape as before, only a little less dramatic.

Having established that, let's see if we find evidence of reduced pitcher workload in these games. The first graph is innings pitched per pitcher in these games. I've focused on the years after 1990, to make things a little more clear. Keeping in mind the very small number of games we're working with -- there were six such games as late as 2005 -- there's not much of a pattern here. There is a slight downturn from 2005 on, but notice that the number of innings per pitcher closely tracks the average length of one of these games. This makes it seem like the sudden rise in eight-pitcher games is more a function of the rise in extra innings games than anything else. 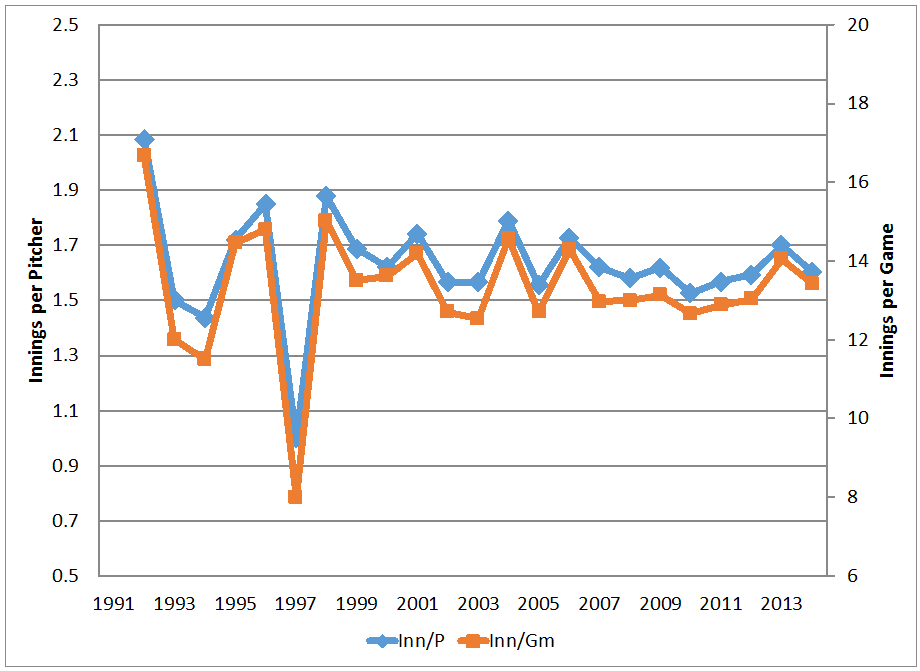 But we can also look at pitch count per pitcher. Since we're only looking over the last two decades or so, most of the games we're interested include pitch counts; any stragglers we'll estimate with Tom Tango's basic pitch count estimator*. But once again, the per-pitcher numbers track extremely well with the per-game numbers. 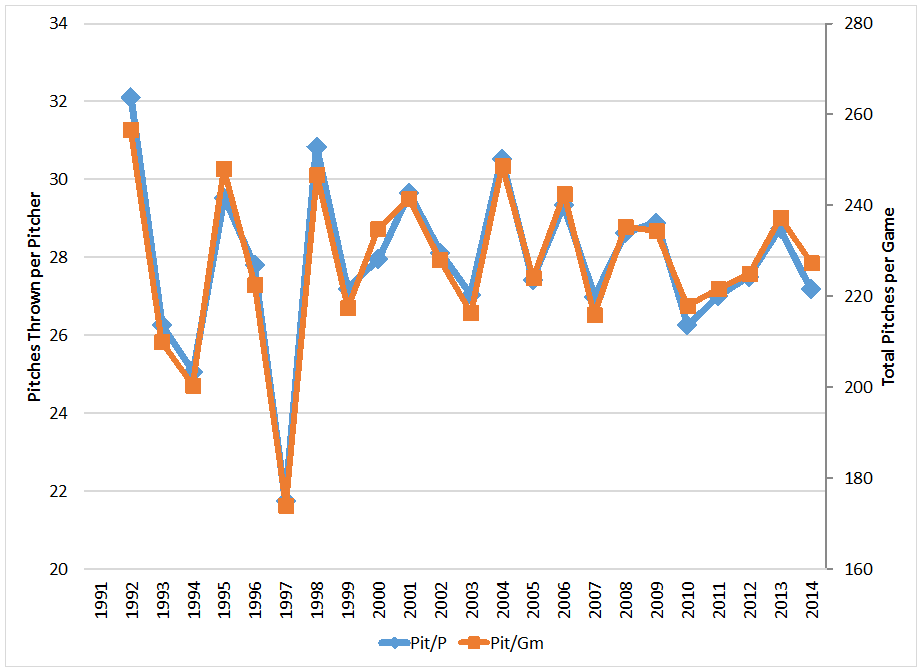 So maybe Rick Renteria's bullpen management wasn't quite as egregious as it seemed. It does seem a little crazy, though, that teams are still burning through their bullpens so often. MLB Network's Brian Kenny, for one, thinks teams should work to develop more knuckleball pitchers, and the increasing frequency of extra-inning games seems like a golden opportunity for a rubber-armed Tim Wakefield clone. You don't even have to waste a bullpen spot on him: Wakefield was a converted first baseman, after all. Have some roving instructor teach your fourth outfielder and backup catcher the basics in spring training; that way, if you need to call on a position player, at least he'll be prepared.

Bryan Cole is a featured writer for Beyond the Box Score, and is fascinated by the Pawtucket Red Sox' 33-inning game. You can follow him on Twitter at @Doctor_Bryan.