On Friday, Yasiel Puig became the first Dodger to hit three triples in a game since 1901. Replay review aside, how exactly did he do it?

In case you hadn't heard, Yasiel Puig went wild horse on the Giants Friday night, torching them for three triples, one of which was the subject of a lengthy video review. In doing so, he surpassed his two-triple total from all of last year. I'll break each hit down via GIFs and zone charts, and then give some tidbits about other three-triple games.

Puig's first triple came in his first plate appearance, in the bottom of the first following a Dee Gordon strikeout, and was the most controversial of the three by far. A GIF follows (you can watch the full video here):

Bat flip aside, the umpires' curious decision to award Puig third came under much scrutiny. Fan interference on a non-homer is normally a ground rule double, and to my eyes it looked like the ball was going out anyway, but the guys in New York either felt the video was inconclusive or decided that Puig definitely would have made it to third anyway. So that's one down, two to go.

Here's the at-bat in graphical form. Pitches 1 and 3 are fastballs, 2 is a splitter, and the ball in play is a slider that came in at 79.2 MPH, nearly a full 2 MPH down from Lincecum's 81.1 average this year. 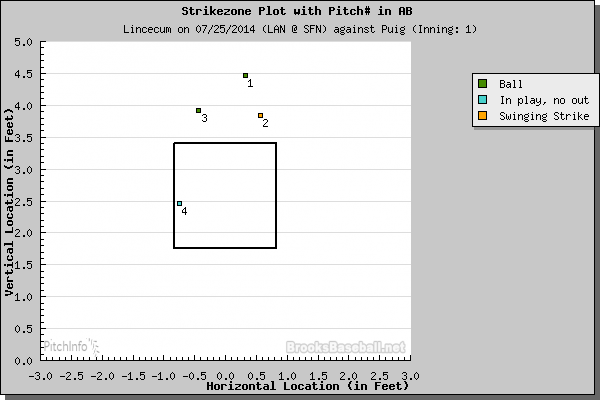 Leaving a breaking pitch middle-in to Puig is a bad idea. Standard small sample size caveats apply, but he's mashed slow stuff on the inside part of the plate his whole career, as evidenced by this BA zone profile (for all pitches classified by Brooks Baseball as "breaking"). The second three-bagger of the night for Puig came in more conventional fashion. He didn't dog around the bases on this one, though, pulling into third standing up with plenty of time to spare to raise his total bases count on the night to 8, in only the fifth inning.

As the video shows, Lincecum missed another spot and paid dearly for it, this time with a fastball. He left it up and didn't get it outside enough, and Puig took what he was given and drove it the other way. For all the talk about his immaturity, Puig certainly shows experience at the plate, going the other way on 14 of 22 pitches thrown to the middle-out zone (#6 on Baseball Savant). 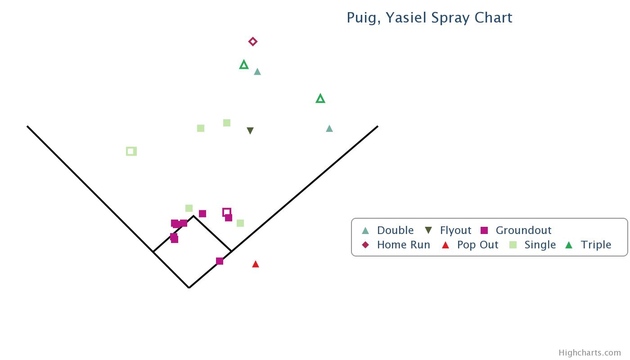 That's some impressive power, and for a guy with Puig's speed, it's sure going to result in a lot of extra-base hits, especially when he plays half his games in the cavernous Dodger Stadium.

Another mistake, another three bases.

Once again, Buster Posey calls for something low and away, and this time it's Juan Gutierrez who can't keep it far away enough. Gutierrez actually gets ahead of Puig with a high sinker, but then misses the strike zone three straight times and oddly chooses to challenge Puig rather than giving him a chase pitch. With Dee Gordon on second and first base open at the time, walking Puig (or at least hoping to use his aggressiveness to better the count) seems like the better play. Who knows, that may have even been the idea, but Gutierrez's miss rendered the strategy moot. 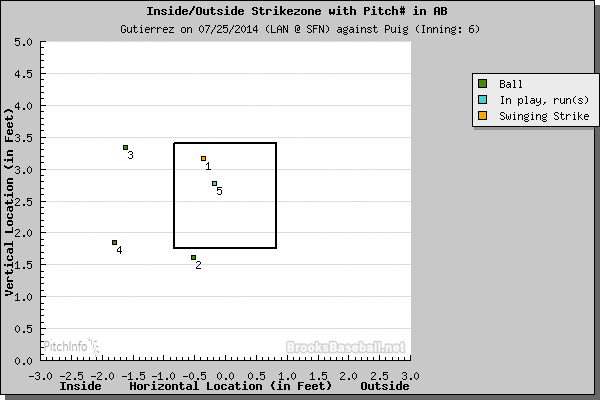 A guide to the theory and practice of creating park factors, using ISO as an example.

Note the barely low slider that Puig watched fly by at 0-1. If Gutierrez gets that call, the whole complexion of the at-bat changes, and maybe I don't have an article to write. Same goes for Gregor Blanco's substandard route to the ball in a futile attempt to cut it off. This has been your daily "baseball is a game of inches" reminder.

Puig became the first Dodger since 1901 and just the 16th player since World War II to amass three triples in a single game, which gave him eight on the season. The most recent occurrence was Denard Span, who hit three for the Twins back in 2010. For the last National Leaguer, you have to go all the way back to Rafael Furcal in April 2002, with Atlanta. Notables to accomplish the feat include Roberto Clemente (1958), Willie Mays (1960), and Ernie Banks (1966). Herm Winningham had only five triples all season in 1990 when he hit three in a game for the Reds, and Carlos Bernier of the Pirates played 105 games in his only major-league season with the Pirates in 1953, but managed three triples a mere ten days after his debut. Puig is probably going to be around a lot longer than Bernier was, barring injury, and he's the type of talent that could put up more, similar games in the future.

All statistics courtesy of FanGraphs and Baseball-Reference. PITCHf/x data from Brooks Baseball and Baseball Savant.