Continuing a series in which players are evaluated by position. This post reviews second base.

Throughout baseball history, second base has been a position in transition, from no-hit, slick fielding players to productive offensive players with little use for a glove and everything in between. The balance that every team seeks between offense and defense depends on the rest of their lineup -- teams with offense at other positions have the luxury to sacrifice some at second for outstanding defense. As such, keep in mind the offensive and defensive capabilities and needs of their respective teams.

This is the scatter graph: 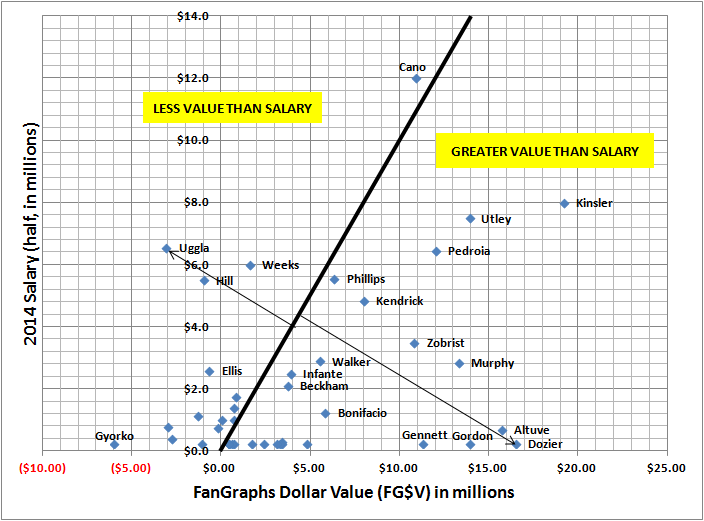 The horizontal axis is FanGraphs Dollar Value (FG$V), an estimate of the value players have produced so far this year. The vertical axis is half of the player's 2014 salary since only around half the season has been played so far. All data for the graph is through Sunday, June 29th, and this link to FanGraphs shows up-to-date data.

When the Tigers traded Prince Fielder for Ian Kinsler, the primary thing they wanted in return was relief from Fielder's contract, with any production from Kinsler to be a bonus. They have to be very pleasantly surprised with what he's done so far this year, since he's delivered the highest FG$V of all second basemen at close to $20 million. He's having his best offensive season since 2011 and improving his batting average. Apparently he left his ability to take a walk behind in Texas -- his batting average has increased 30 points over 2013 while his OBP decreased. He's fielding his position as well as he has in quite some time and helping fill the gap left when Jose Iglesias was injured coming out of spring training.

Coming into the season, my knowledge of Brian Dozier consisted of seeing his name on box scores as I entered data. He received his first regular playing time in 2013 and wasn't noteworthy, showing some power but a tendency to strike out too much, and wasn't a plus defender. His average isn't any different, but his OBP has increased by 40 points, implying an increased affinity in taking walks. He's improved his fielding and has enough speed to steal a base when necessary. The arrow on the chart reflects that he's on a minimum salary deal and putting up tremendous value, making him the most valuable (in cost efficiency terms) second baseman in baseball. He won't be eligible for arbitration until 2016, so if he continues to produce as he has, he'll be one less hole the Twins have to fill for some time to come.

I'll lump Chase Utley, Ben Zobrist and Daniel Murphy in a group I call . . . the next Oakland Athletics second baseman. The lack of production the A's have received from Eric Sogard and Nick Punto hasn't hurt them as they have the best record in baseball as of Tuesday, but one of these players would be a significant upgrade and a major improvement. Chase Utley's contract is actually quite friendly, paying him $10 million in 2015 and $15 million for 2016 and 2017, but only vesting if he reaches 500 plate appearances. He rebounded nicely in 2013 after a prolonged decline since 2011.

Having written that, my first choice would be Ben Zobrist, a man for all positions. Just when I thought the Rays had decided to use him exclusively at second base, he's been making starts at shortstop. The A's can use him as they wish, and he could be a one-year rental, as he's eligible for free agency after 2015. His price won't be cheap. Daniel Murphy has had the misfortune of playing very well for the Mets and enters his final year of arbitration eligibility in 2015. Chances are very good none of these players will join the A's, but it is July after all, and it's never too soon to talk about trades that won't happen.

Brandon Phillips and Robinson Cano are similar in that both have relatively large contracts (in Cano's case, there's nothing relative about it) and are delivering enough value to justify them. The very first post I wrote for Beyond the Box Score was about Cano's signing, which I didn't understand then and still don't much now. I don't have any real issue with Cano making $24 million at 31, but I'm pretty sure the Mariners will deeply regret it at 35 . . . and 36, 37, 38, 39 and 40, even after taking into consideration the value of the contract will only be around $15 million in today's dollars. His power was greatly aided by playing at Yankee Stadium and is drastically reduced while playing half his games in Safeco Field. He can still drive in runs without hitting home runs, and his weighted runs created plus (wRC+) is among the best for second basemen. He's delivering his value -- the question will be for how long, and if the Mariners can get competitive in time to make full use of him. As of this writing, the Mariners are right on the cusp of making the wild card.

Young and cheap applies to Jose Altuve, Scooter Gennett and Dee Gordon. Altuve has been solid for an awful Astros team since he came up in 2011 and has an OPS of .838 with only two home runs, suggesting the ability to hit extra-base hits without extreme power. Gennett's production is one of the many reasons the Brewers are tied with the A's for the best record in baseball -- they needed some production, any production, at second after the awful year Rickie Weeks had in 2013 (and continues to have in 2014), and Gennett has delivered and then some. Dee Gordon plays as if there's a Cuban prospect behind him -- wait, there is, it's Alex Guerrero! Guerrero isn't doing much in Triple-A, with 10 home runs in 127 plate appearances for a pedestrian 1.152 OPS, so Gordon better keep producing. At some point, Gordon's speed will be compared to Guerrero's power, which is when the ultimate decision will be made as to who the Dodger second baseman of the future is. Ask not for whom the bell tolls, Dee Gordon . . .

Dan Uggla, where to begin? Maybe the .210 batting average in close to 2,000 plate appearances since joining the Braves a free agent? Hahahahahahahaha! The 33-game hitting streak in 2011 that saw his average rise to . . . .232? Man, that was a riot! The .163 average in 2014, along with a glittering 35 wRC+ and an OPS under .500? Stop, stop, you're killing me (and the Braves *rimshot*)! Lately the Braves have been using him as a pinch hitter, raising the obvious question:

Shouldn't a pinch hitter be able to, you know, hit?

It could be worse -- he could be Jedd Gyorko. He at least produced for the Padres in 2013, hitting 23 home runs in a difficult park for hitting. In his second full year of playing, it's difficult to determine which year was the fluke, 2014 or 2013. He's currently on the DL for plantar fasciitis, which can be the kiss of death for any athlete, so it's too soon to pronounce absolute judgment on him.

Being a fan of both Chicago teams, both have decisions to make at second, and sooner rather than later. The Cubs have a log jam up the middle with Starlin Castro and Darwin Barney soon to be joined by Javier Baez and Arismendy Alcantara. Barney is clearly the odd man out (he's an unlabeled dot on the wrong site of the graph), but how the two young players and Castro will be used is a continuing saga that will only grow in urgency as 2015 nears. For the White Sox, Gordon Beckham appears to be what he's going to be -- at best someone who can justify a modest contract, but probably not worth big money when he reaches free agency in 2016. Initial views of Leury Garcia and Marcus Semien have been less than inspiring, suggesting they may have a hole that needs to be filled.

It's an interesting time to be a second baseman. As runs decrease, defense, speed and baserunning attain greater value. There appears to be around four second basemen who might hit 20+ home runs this year -- as recently as 2007 there were seven with two more at 19. It's too soon to state definitively, but it's possible the second base mold is changing back to a defense-first, offense-second mind set, one willing to sacrifice power for speed, defense and the ability to get on base.