Way back in December of 2011 Tsuyoshi Wada signed with the Baltimore Orioles, thus beginning his career in MLB. Unfortunately for Wada it took him 3 years to make his major league debut.

Share All sharing options for: Who is Tsuyoshi Wada?

The resume from NPB was impressive. In 2011 Wada threw 184.2 innings for the Fukuoka Softbank Hawks while maintaining a 1.51 ERA. He also struck out 8.2 batters per nine innings while walking just 1.9, both rates that spoke to his impressive command. Wada wasn't exactly a flamethrower though, and some wondered if his high-80s fastball would have any success in MLB. The Orioles eventually signed him to a two year, $8.15 million contract with a club option for a third year at $5 million.

2012, Wada's first season in the United States was a total loss as he blew out his arm while pitching in Baltimore's minor league system. It must have been a devastating setback for Wada, but it also removed a potential contributor from what would end up being a surprise playoff team. The following season Wada threw 102.2 innings for Baltimore's AAA-affiliate, delivering a 4 ERA in the process. His strikeout rate remained solid, but he walked more than three batters per nine innings, which was compounded by having opposing hitters BABIP .328 against him. He never saw the field as a Baltimore Oriole.

Although he's been a durable, effective workhorse, the arbitration process is about to significantly alter Lance Lynn's value.

Looking at Felix Hernandez's changeup through the lens of effective velocity.

A $5 million option on a guy that struggled to a 4 ERA in AAA was a luxury the 2014 Orioles couldn't afford, and GM Dan Duquette knew it. The Orioles declined the option, and Wada became a free agent, free to sign with any MLB team. Wada was a luxury the Cubs could afford, and he joined Hammel, Strop, and Arrieta as ex-Orioles in the Cubs' system.

Through 113.2 innings for triple-A Iowa Wada showed the promise he flashed when the Orioles initially signed him. He posted a 2.77 ERA with a much improved 9.50 strikeout rate, and a 2.22 walk rate. Eventually he would earn spot starts for the Cubs, including three such starts in the month of July.

Wada's first start on July 7th wasn't a long one, just 5 innings, but he didn't allow a run and pitched well enough to earn consideration for future starts. A few weeks later he'd get another start on July 23rd going 4 innings but allowing 5 earned runs while walking and striking out 4 batters each. Not a great start, but the trade of Hammel and Samardzija to Oakland had earned him some slack.

Last night was Wada's best start of his pro career as he went 7 innings allowing just 1 run on 5 hits and a walk. He also struck out 6 batters to balance out his sub-1 WHIP from the start. This then makes one wonder, which Wada is the real one? Is it the guy who's thrown 12 innings of one run ball in his two best starts? Or is he the guy with an ERA over 9 in his worst one?

The answer, predictably, is somewhere in the middle. Wada essentially throws three pitches with his fastball, slider, and change making up more than 85% of the pitches he's thrown as a pro. The problem with drawing conclusions from this is that it's an incredibly small sample size, so anything we think we know could change dramatically by his next turn through the rotation.

That said, teams often have to make decisions based on terribly small samples, so seeing what we do know might help us understand Wada a bit better.

The first ineresting quirk is that he likes to use his fastball, but he's getting whiffs on it by throwing it up and away from right-handed batters. The image below shows just that, the whiff rate on fastballs to righties. 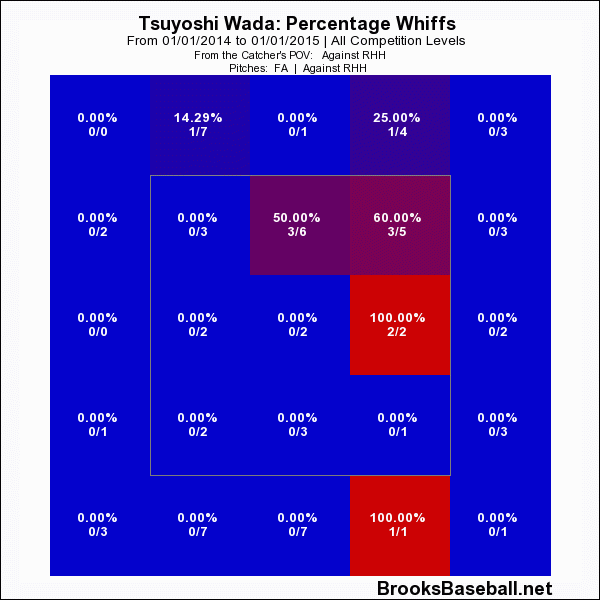 Here Wada is relying on his strength and letting his natural arm-side run take his fastball up and away from the right-handed batters who are looking for something more middle-in. It makes sense for Wada, a lefty, to use that arm-side run to keep the ball away from right-handed hitters as much as possible.

One other interesting note is how Wada uses his slider, again specifically to righties. We would expect Wada to use his change up down and away to righties, which he does in fact do as you can see here. We'd also expect to see fewer sliders given that batters tend to hit pitches that break towards them reasonably well. While his overall slider usage to righties is about half of what it is to lefties, it's actually the most common pitch he's thrown to start at-bats to righties so far. (Note: this data does not include last night's outing which could drastically change these numbers). No, Wada pitches backwards with sliders on the first pitch 33% of the time to right-handers, with usage plummeting after that.

You can see Wada's efforts to backdoor the slider for early strikes in the zone chart below. Instead of whiff rate (like above) this chart just shows raw count and percentages of pitches: 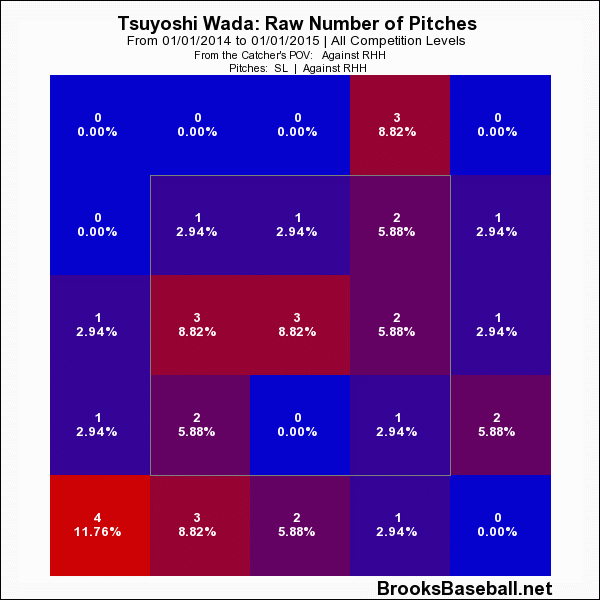 Pitching backwards is often an approach you'll need to consider when your average fastball comes in at barely 90 mph. That said, Wada's approach could get him shelled in later outings once opposing hitters adjust and hit those backdoor sliders Wada is using to get ahead early.

Only time will tell if Tsuyoshi Wada can truly be an impactful pitcher for the Cubs this season. Personally, I think the league will adjust and being hitting him hard. Then again, Jamie Moyer was successful for many years with a less impressive toolkit of pitches, so it's possible Wada can prove the early data wrong. That said, my prediction for him this season and beyond would be more in line with the 4.40-4.81 ERA ZiPS and Steamer had projected for him going into last night's action.