Cody Ross has hit the DL once again. What can the Diamondbacks expect when he returns from injury? Are there any indicators from past injury stints to suggest how well Ross might perform?

I've long been fascinated with injuries in baseball. They seem to have the largest impact of any of the major sports. Sure, in basketball if you lose a star for the season, your year is in the drain. The same is generally true with football to a lesser extent. In hockey, injuries are far more secretive, but they don't seem to have the same impact as injuries in baseball. For the most part, the injuries in other sports are cut and dry. Player X is injured, we know our chances are severely limited. In baseball, that's not the case. The season is so long that an injury to the best player on the team won't automatically doom a year.

It's when teams start racking up injuries that a season is doomed. And that happens far more frequently than it should. If there is a glaring market inefficiency in baseball, it is injury management. I don't have the solution, far from it. However, it is an interesting topic to study.

Take Cody Ross, for example. He just hit the DL for the ninth time in his Major League career. It is the third time he's seen the disabled list as a result of a calf injury. I wouldn't necessarily classify Ross as injury-prone, but nine visits to the DL means he's a frequent visitor. Of course, the nine DL stints do not include days missed when he was day-to-day with a minor injury. Ross might not be the perfect study as there are certainly players with a longer injury history, but his injury is recent, it's a repeat issue, and his trips to the DL are stacking up. With that in mind, let's explore whether Ross' returns from injury in the past have given us any indication of what we can expect when he returns from this one.

There were so many routes I could have taken with the numbers here, but I chose to keep it relatively simple. I looked at Ross' batting average, on-base percentage, slugging percentage, OPS, ISO, walk rates, and strikeout rates in incremental periods after his return from injury. I chose to look at the first seven days back from the injury, the first 30 days back, and the rest of the season after returning from injury. For the rest of the season stats, keep in mind that if he suffered another injury, the rest of the season stats will only include the games played since he returned from the first injury up to when he suffered the second injury. Also, the numbers don't span more than one season. So, if Ross suffered a season-ending injury, he's not going to have any seven-day, 30-day, or rest of season numbers associated with that injury. The logic being that the offseason recovery time skews the impact that injury had on his return production.

As I mentioned, Ross is on the DL for the ninth time in his career - the third time for a calf injury. Here's how his previous eight stints looked:

A detailed look at the Diamondback pitching development since the 2009 move of the AAA affiliate to Reno.

It's being reported that Nick Evans has signed with a Japanese team, the Rakuten Golden Eagles

The hip injury he suffered in 2013 is certainly the most significant injury. The resulting surgery from that injury caused Ross to miss 46 games in 2013 and 18 games this year. A quick look at Ross' numbers indicate that he's probably still working his way back into form. In the 66 games he has played this year, Ross is hitting .238/.287/.306.

As we break down the DL stints further, you can see that he has missed quite a bit of action as a result of his injuries. In total, Ross has missed 257 days and 206 games. Again, this is time missed as a result of a trip to the DL. It does not include time missed due to aches and pains not requiring a DL stint. Ross has missed nearly 26 games per injury on average. But, the question remains, how did he do when he returned from injury?

The below chart looks at Ross' production in terms of BA, OBP, SLG, OPS, and ISO. The red line for each indicates Ross' career average as a point of reference. 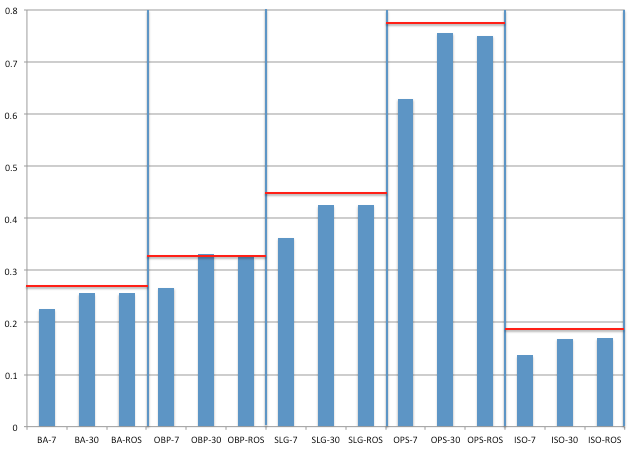 The definitions may seem obvious, but I'll point them out just in case. BA-7 is Ross' batting average in the seven games after return from any injury. BA-30 is the batting average in the 30 days after injury. And BA-ROS is the batting average for the rest of the season after injury. The same applies to each of the other stats. These numbers do not factor in injury type. They are simply based on the grand total result of Ross' production in the first seven games, 30 games, or remainder of the season after any injury.

Regardless of what production stat you are looking at, Ross struggles to get back to his career average after injury - even when looking at the numbers for the remainder of the season. Of course, part of this is his natural decline, but part of it is clearly related to the return from injury. Ross only recovers in on-base percentage after an injury. Before moving on to some thoughts on post-injury production analysis, let's examine Ross' BB% and K% after returning from injury. 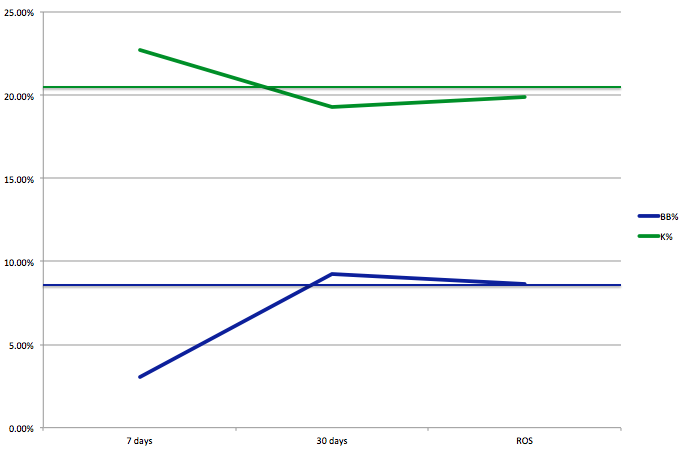 When Ross returns from this calf injury, it's probably safe to assume he is going to struggle. In fact, he has been struggling so much this season, I'm not sure there should be much faith held in him breaking out of his slump this year at all. This isn't groundbreaking analysis by any means, but it's a start to something that could prove incredibly valuable.

I think we often take the easiest route when trying to explain something. If a player struggles after an injury, it's just the "adjustment period." If a player struggle after he passes his "prime," well we have already defined the reason for the struggle, right? There are deeper explanations that data analysis can help us uncover. Maybe prime years can be extended. Maybe players don't have to struggle in the periods directly after returning from an injury.

My research on this topic is far from complete. I am generally skilled at analyzing data more than mining it. My skills certainly do not lie in SQL or database management. However, if you give me the information, I can analyze and draw conclusions. Perhaps, with assistance, the entire league can be analyzed in terms of injuries. Are there trends that can be identified? Maybe rehab assignment management can be tweaked? These are just a few of the doors that can be unlocked with a thorough understanding of post-injury production. If you want to help in this research, drop me a line at thefivepointfivehole [at] gmail [dot] com or on Twitter.

Justin Hunter is a contributing writer at Beyond the Box Score. He also writes about all things Padres at The 5.5 Hole. You can follow him on Twitter at @the5_5hole.