Who has hit the longest home run at Busch Stadium during the HitTracker era?

Albert Pujols, then-reigning NL MVP and member of the St. Louis Cardinals, was pushing for an even better season than before. By the end of June, Pujols was already improving upon the previous year's performance, blasting 28 home runs with an OBP of .450. Not once in 2009 did Albert's OPS even fall below 1.039. Needless to say, Pujols was arguably the best batter in Major League Baseball and was at the pinnacle of his career.

The opposing pitcher paints a different picture. Randy Johnson's end was near. Once regarded as the most feared pitcher in baseball, the Big Unit was trying to pace himself through one last season of baseball with the San Francisco Giants. Leading up to the end of June, the five-time Cy Young Award winner had compiled a 4.68 ERA and experienced a drop-off in velocity. As to be expected with his age, the 45-year-old was only throwing 89.88 mph with his fastball in June. Obviously, that is incredible for a pitcher with 21 years of baseball under his belt. Unfortunately, Johnson was also giving up harder contact.

Albert Pujols stepped up to the plate in the fourth inning after striking out in his first appearance of the day against Randy Johnson. With one out, the Cardinals first baseman watched as the first pitch skimmed the right edge of the strike zone and get called a strike. The next pitch Johnson threw as a slider low in the zone that Pujols fouled off of. Albert has one of the keenest eyes in baseball and recognized the opportunity the next pitch presented. With an 0-2 count, Johnson released a lifeless four-seam fastball at 91 mph straight at the upper, middle part of the zone and Pujols crushed it (Video here). He muscled the ball straight over the left field wall and deep back below the left-field concourse. Had the ball not crashed into the stadium wall at the back of the seats, the ball would have traveled 465 feet, the longest home run at Busch Stadium during the HitTracker era (since 2006). 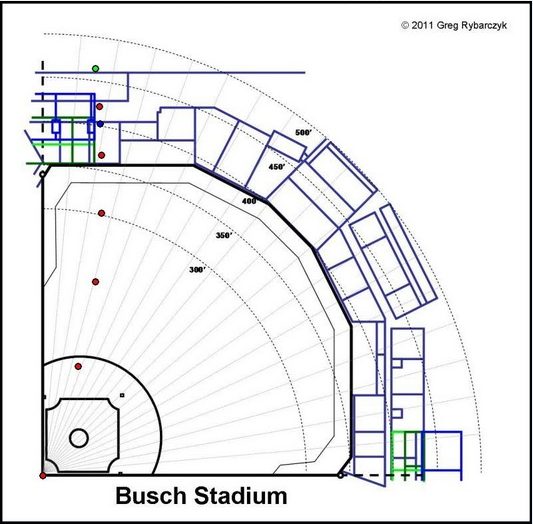 When Randy Johnson's 6' 10" frame wound up and released, the ball had little movement on it at all and generally hit the middle of the strike zone. With that kind of poor placement, Pujols was able to take the it deep with relative ease. Looking at the Baseball Savant figures below, the left strike zone displays where the specific pitch went and the right strike zone displays the heat map of where all of Albert Pujols' 2009 home runs were hit from. As can be seen from the figure, Pujols hitting acumen was strongest in the middle of the zone, where the balls usually travel straight towards the center of the plate. Johnson's pitch easily fit the mold.

It's unfair to say Johnson had the upper hand in this matchup. At 45 years old, this is by no means a knock on his amazing career; however, their previous track record indicates similar success. In 24 at-bats versus Johnson dating back to 2001, Pujols has a .458/.500/1.208 slash line and a 1.708 OPS. In those handful of appearances, Pujols had five home runs and two intentional walks.

Two innings later, Pujols repeated the stunt, blasting another home run off of Johnson with a man on base. They were both in vain, as they were the only offense the Cardinals lineup could muster up against the Giants, eventually losing 6-to-3. Pujols continued his monster season and eventually made out with his second consecutive NL MVP award and 47 homers on the season. The diagram below demonstrates his ability to pull the ball into left field. Actually, only a select few of his home runs in 2009 went anywhere besides left field. 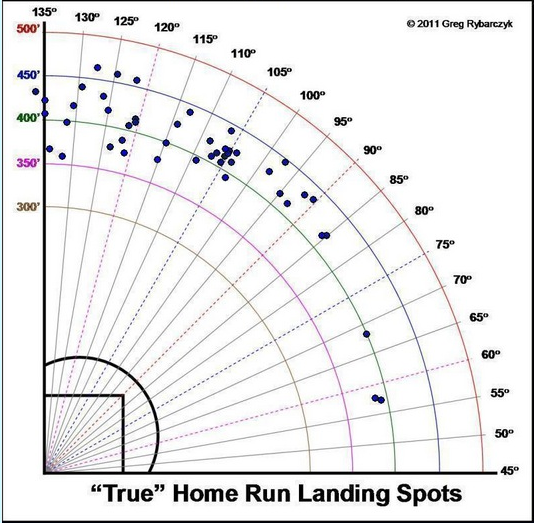 In this clash between two future Hall of Famers, Albert Pujols won out. Randy Johnson was in his final year of baseball and Pujols was at the height of his career. Who knows what would have happened if Randy Johnson faced him at his peak?