With increased cutter usage and improved control, it's becoming nearly impossible to question whether or not Jake Arrieta's success is for real. Because it is.

At some point in the somewhat near future, the Chicago Cubs are going to boast a very good baseball team. They've loaded their farm system up with premium offensive talent and are expected to demonstrate a willingness to spend that has been absent during this lengthy rebuilding process. But while most around the game will acknowledge the positive outlook that the franchise might have for the future, a common knock is a lack of impact arms throughout the organization.

While this is true in the respect that the Cubs do lack the high profile arms that could be considered blue chip prospects, like they have with four or five positional guys, it's not quite accurate to say that the Cubs really lack pitching assets heading into the future. In fact, the club already boasts a starter for the front of their rotation moving forward in Jake Arrieta.

The Cubs bought very low on Arrieta, grabbing him from the Baltimore Orioles as a change of scenery candidate. In the deal that sent Scott Feldman and Steve Clevenger to Baltimore, the Cubs nabbed Arrieta and reliever Pedro Strop. It was a move that could be considered the marquee trade of the Theo Epstein/Jed Hoyer era, at least until Addison Russell reaches the big leagues.

With the Cubs having dealt Jeff Samardzija and Jason Hammel back on July 4th, Arrieta has become the only Cubs starter worth tuning-in to watch. On a larger scale, his starts have become must-see television for anyone around the league, as he establishes himself as one of the game's better young arms. While he's always had plus stuff, there were questions about his control. His struggles in Baltimore led to many writing him off, until he came back in a very big, and very real, way this season.

Given a small sample size, in terms of his success, it still isn't clear for some whether or not Arrieta's success this year is for real. But when you look at how he's done it, it becomes very clear that his approach this year makes him absolutely for real.

Jake Arrieta's numbers thus far this season look like this, through 14 starts (via FanGraphs:

It's still a relatively small sample size, given that Arrieta started the year on the disabled list, but there's plenty to be excited about. His FIP and xFIP each indicate that his absurdly good 2.12 ERA is very for real. His control has been suspect at points throughout his career, but his walks per nine, at just 2.65, are his lowest average at any level. Another very encouraging thing to point out is the fact that his ground ball rate is at 49.5 percent for the year.

The way in which Arrieta has found success is no mystery. It's really been two-fold. For one, his control has been outstanding. Again, that walk rate is as low as it's been at any point in his professional career. He's attacking low and away against righties and low against lefties. This is his zone profile for the year, courtesy of Brooks Baseball: Attacking low in the zone has obviously provided tremendous benefits for Arrieta. His control has allowed him to do so, and it has led to that outstanding ground ball rate.

Then there's the matter of his pitch selection and usage. Arrieta has cut down on his four-seam fastball usage, to the tune of a 10 percent decrease since his early starts this year. Last year, he threw that four-seamer 23.39 percent of the time. He's down to 19.76 percent this year, including only 14.63 percent in June and 18.43 to this point in July.

In the absence of his fastball, Arrieta has utilized his cutter as his primary pitch, which is reflected in his usage chart here, illustrated as a slider (again via Brooks): 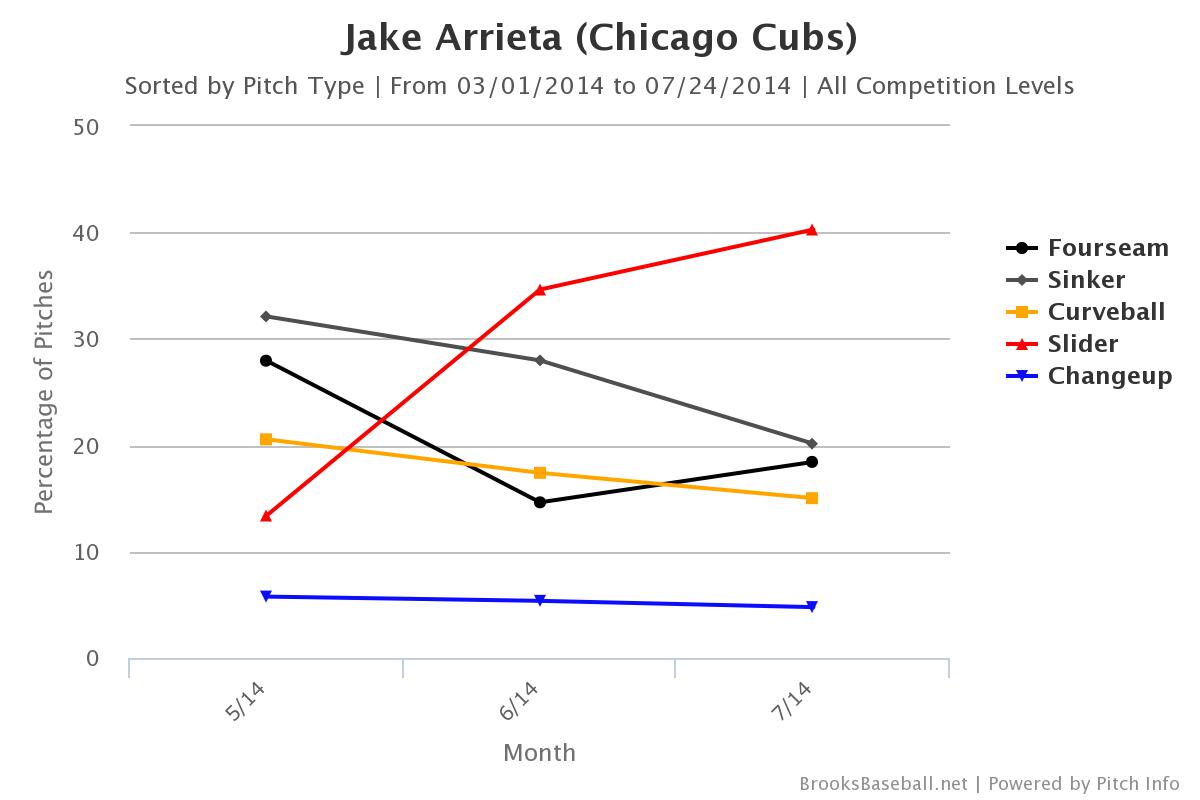 That cutter usage has tripled since his earlier starts this year. In May, he threw that just over 13 percent of the time. He threw it over 34 percent of the time in June before tossing it just over 40 percent in July. His sinker usage has dropped as well, but the curve and change-up have remained relatively steady, though the change-up percentage holds very little significance to begin with, at under five percent.

In turning his dominant pitch over to the cutter, rather than a four-seam fastball, Jake Arrieta has realized the big upside that once had him pegged as one of the top pitching prospects in baseball. There is the potential injury risk that comes along with increased cutter/slider usage, so that may continue to linger. Nonetheless, Arrieta's success can't be overlooked or written off as a flash in the pan. This is very for real, and Arrieta represents a real building block in the Chicago Cubs' rotation.

Randy Holt is a staff writer for Beyond the Box Score. You can follow him on Twitter @RandallPnkFloyd.