Expectations were high when the White Sox signed Jose Abreu in the offseason, and it's safe to say those expectations have been exceeded.

Share All sharing options for: The Jose Abreu experience

After a disastrous 2013 season which saw the White Sox drop to a 63-99 record, which was 22 fewer wins than in 2012 with essentially the same team, GM Rick Hahn surprised many by signing Cuban defectee Jose Abreu. Abreu was not a complete unknown -- he had played very successfully for Cuba's Serie Nacional and had an excellent 2013 World Baseball Classic. Even so, it was a risk to sign him to a 6-year/$68 million contract, especially for a team that already had Adam Dunn and Paul Konerko playing first base/DH. Granted, both Dunn and Konerko will be gone after 2014 (in Dunn's case, perhaps sooner), but of all the needs the White Sox had, first base wasn't one of them.

The superlatives to describe Abreu's start cannot be overstated. This chart, adapted from Baseball-Reference data, shows the most home runs in a player's first 86 games, the number Abreu has played through Monday, July 21st:

This has almost become passe, which is a shame when viewing something of historic significance. It's very easy to forget just how uncertain his production was -- this was what Baseball Prospectus 2014 wrote in their preseason Abreu analysis:

Few question the massive slugger's raw power or approach, but some believe his video game statistics were produced by feasting on the bottom tiers of Cuban pitching and mask a swing that can be tamed by well-placed fastballs on the inner half . . . if GM Rick Hahn . . . is right about his bat, the Sox will have found the slugging heart of their order for the rest of the decade.

It's difficult to project how a player will make the transition from Cuba to the U.S., particularly when the defection was so recent (his parents joined him in this country in May), and some projections showed him with power and an average in the .250-.260 range. This shows his hitting before and after an injury early in the season:

He showed the power, but also an alarming tendency to swing at pitches outside of the strike zone, demonstrated by this chart from Daren Willman's baseballsavant.com: 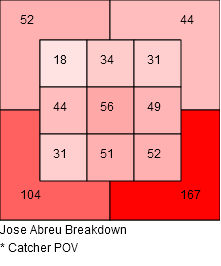 This chart only shows pitches in which Abreu swung, and shows his fondness for swinging at the low outside pitch. He's seventh in baseball in swinging at balls outside the strike zone, and this could pose problems as pitchers change their approach to him. This chart from Brooks Baseball shows his batting average depending on pitch zone: 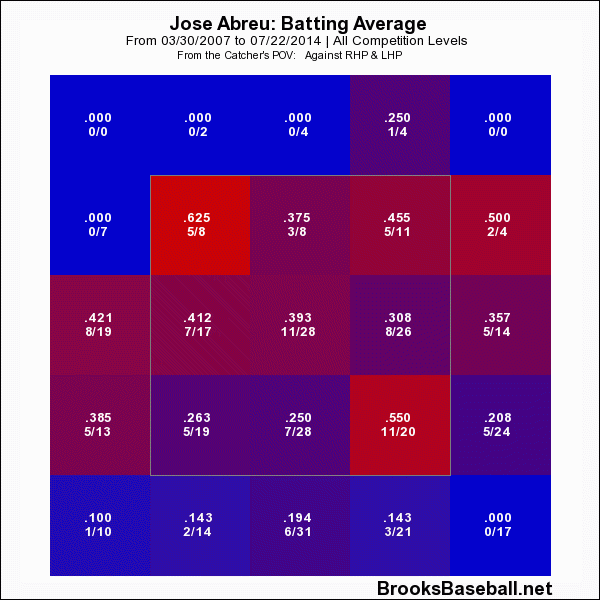 The reason for that fondness is clear --  he loves to hit balls low and away, but it's a fine line between success and failure. I have little doubt this is being addressed on a daily basis by the White Sox coaching staff and it will be very interesting to see if this changes over time.

The expectation was that Abreu would be a power hitter in a good hitting park at US Cellular Field, who probably wouldn't hit for a high average. In a revamped White Sox lineup, the power would be enough, but Abreu has begun to hit for average as well, and now, has one of the highest weighted on-base averages (wOBA) in the game -- this chart shows the wOBA components to illustrate how Abreu has done this:

wOBA isn't just a matter of getting on base but what base is reached. He substitutes hitting home runs for taking walks, and for a power hitter this is a completely reasonable tradeoff. He's also cut down his strikeouts, and even though his .348 batting average on balls in play since returning to the  lineup in June is unsustainable, an increased number of at-bats that end in contact will be a very positive development.

I wrote about my early choices for Rookie of the Year last month and predicted Masahiro Tanaka would win the AL ROY. Of course, Tanaka went on the DL earlier this month and how he returns will be a prime determinant in that race, but if Abreu continues to build on what he's done so far, he will make it a much tighter race. Abreu could even work his way into the MVP discussion, but probably can't hope for much more than being in the top 10, maybe top 5.

The Sox didn't really have any realistic hope for this year. What Abreu provides is a clear answer at first for the foreseeable future. If the organizational pitching behind Chris Sale and Jose Quintana develop, and if they can find a bullpen (that's right -- an entire bullpen), the Sox could be in contention as Detroit ages and Kansas City and Cleveland do whatever it is they're doing. They have a lot of work ahead of them, but they're set at first for some time to come.