Danny Salazar is back in the big leagues

Danny Salazar, pre-season darling, is back in big leagues after a brief stint in the minor leagues. What should we expect from him at this point?

Share All sharing options for: Danny Salazar is back in the big leagues

The Cleveland Indians have recalled 24 year-old right-handed starter, Danny Salazar, from Triple-A Columbus. Salazar emerged on the major league baseball scene at the end of last season as he helped the Indians earn a spot in the wild card playoff game; a game that the Indians actually tabbed him to start. The Indians' trust in Salazar was warranted.

In his eight starts across April and May (40.2 IP) Salazar posted a less than impressive 5.53 ERA, 4.72 FIP line, good for a 144 ERA- and 124 FIP-. His ability to induce swinging strikes went down (10.6 SwStr%) and correspondingly his strikeout and walk rates moved in the wrong direction (25.5 K%, 9.2 BB%). The Indians decided that a run at Triple-A would be best for him to get back on the right track.

So, what changed with for Salazar across seasons that might have precipitated his decline in performance? Perhaps it was just another example of the Jonah Keri curse:

Congrats to Danny Salazar, who only got demoted to AAA--and not something much worse--after I wrote about him 90 times.

Or maybe there is something a little more tangible that we can look to.

It is very difficult to determine the factor or -- more likely -- factors that lead to changes in a pitcher's performance. However, in looking into Salazar, one thing that really jumps out is a pretty significant drop in velocity on all of his pitches: 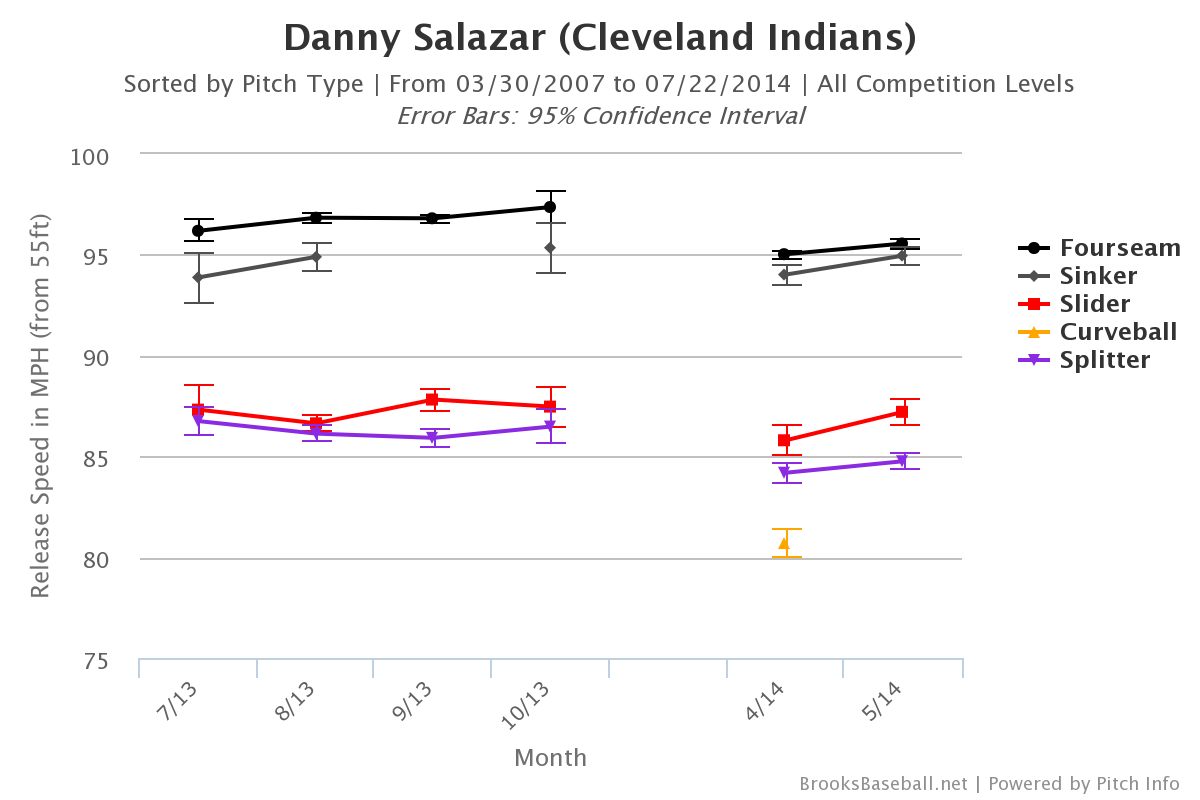 A one- or two-mph drop on all pitches might not seem like a lot, but it is and can change how batters perform. Unfortunately we don't have direct access to velocity data for Salazar's recent time in the minors so I cannot really address if he really is throwing harder. We can look at his performance outcomes, and frankly they have not been great. In 10 starts at Triple-A (53.2 IP) he has posted a 4.02 ERA and 3.96 FIP. His strikeout rate is back up a little bit 27.5%, but the bad news is that his walk rate is up to an awful 11.5%.

Now, if we take out his May starts -- which is not very rigorous analysis -- then there might be some hope for Indians' fans. He posted a 3.07 ERA and 3.33 FIP in his June and July starts. However, he still had an awful BB% (11.3), a below expected BABIP (0.287), and an above expected left-on-base rate (LOB%; 75.8). So, even after recognizing that these numbers use arbitrary endpoints to present a positive interpretation of Salazar's time at Triple-A, we should temper our excitement for his return.

As I mentioned in a post a few weeks ago on pitchers outpitching their peripherals, Mitchel Lichtman recently demonstrated that an up-to-date projection system is much better for predicting future performance than portions of a season's statistics. With that in mind let's look at a projection system's report for Salazar. Here are components of the Steamer Rest-of-Season (RoS) and ZiPS RoS projections for him:

These projection systems do not give strikeout and walk rates, but rather present things on a per-nine-innings basis. To put the values in the table into a rate context, his projected strikeout rates are around 22 - 25%, and his projected walk rates are around 8.5 - 9.0%. Overall, ZiPS is a little higher on Salazar than Steamer, but both expect performance closer to his performance this season at Triple-A than to either of his stints in the big leagues. This makes sense, as his talent likely lies somewhere between the greatness of 2013 and the not-so-greatness of 2014.

The Indians could use another boost from Salazar down the stretch as they compete for a playoff spot. He may not entirely regain his 2013 form, but an improvement on his performance from the early going of this season and increased consistency will certainly be welcomed every fifth day.