Jean Segura lit the NL Central on fire in 2013 while emerging as one of the game's best young talents. Unfortunately, his performance hasn't carried over into the first half of 2014. What's behind his steep drop-off in production at the plate?

*Note: this article was originally constructed just prior to the death of Segura's nine-month old son. Its publication was delayed two weeks due to the sensitivity of his family's personal tragedy. Our sincerest respects go out to the entire Segura family.

Jean Segura was excellent in 2013. After being traded from the Angels to the Brewers as part of the Zack Greinke trade, he survived his 2012 call-up and was a legitimate terror for opposing pitchers in his rookie season. But if you've followed his progress in his sophomore campaign, you're well aware that he's essentially fallen off a cliff through the first half of 2014. The question everyone wants to know is why?

In fact, perhaps we should have seen some of this coming. Take a look at how Segura's breakout 2013 progressed by month, measured by wRC+.

After a blazing hot start, Segura cooled as the season progressed. Some of that was likely fatigue as he played the most games of career in a single season (146), but there were other indicators that things might not hold up. His plate discipline wasn't terrible in the strikeout department, but it's never easy to succeed with a 4% walk rate. If anything, this might have told us that he didn't have a great idea of the strikezone. Still, one had to hope that his eye would improve because, after all, he was just 23-years old in his first full season.

Segura essentially made his living putting the ball in play and using his legs to do the rest. He did hit a ton of line drives early in the season, but that tapered off as spring progressed to summer. With his speed, however, one could see a very effective BABIP in his future even considering all of the grounders. As evidence, he finished second in 2013 in infield hits (38) behind his teammate Norichika Aoki. By keeping the ball on the ground, Segura was giving himself a chance to get on base and while we'd all like to see more line drives, he was still performing effectively.

Is the infield shift ruining baseball?

Is the infield shift ruining baseball?

What stood out to me most, however, was his spray chart. In an earlier piece I wrote here at Beyond the Box Score, I examined whether the infield shift was ruining baseball. Of course it's not, but in crunching some numbers, Segura was in a unique position. He led the majors in balls in play up the middle and the other way (center% + opposite%). And he led that category by a wide margin. Take a look for yourself.

When you think about it, center rate plus opposite rate on batted balls is just a fancy way of saying "not pulled rate." And yes, Segura pulled the ball less frequently than any other hitter in 2013. His up-the-middle approach wasn't necessarily a bad thing, but it might make him exploitable and certainly means that he's not pulling the ball with authority. Again, that doesn't mean he was bound to be terrible going forward, but having the ability to rip it down the line would potentially be beneficial.

Flip it forward to 2014 and we see a completely different profile.

We can visually see this through his spray charts from each season, too. 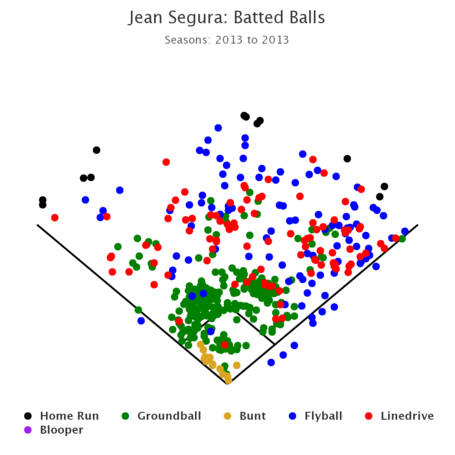 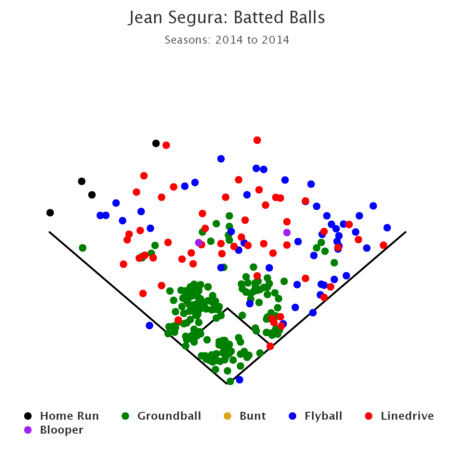 Segura has vastly changed where he's hitting the ball. His batted ball types haven't changed dramatically, but the location of where those balls are going has. No longer is he slapping it the other way or just trying to go up the middle. Instead, he's been more balanced, which we might think would be a good thing, and maybe it is in the long run, but at the moment, it's not working. In fact, he's gone in an entirely different direction and is now pulling the ball more than anything else.

Has this been as a result to how he's being pitched? Yes and no. He's seeing a similar profile of pitches this year but the location of those pitches has changed somewhat. 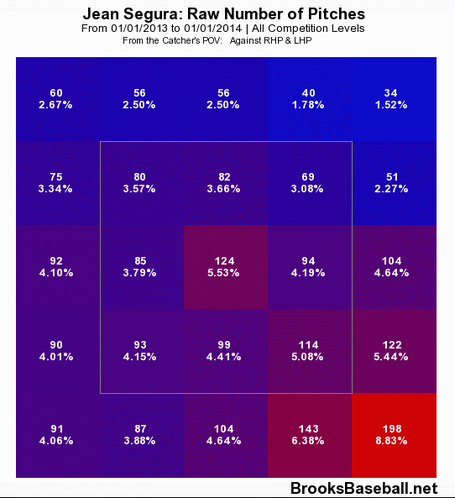 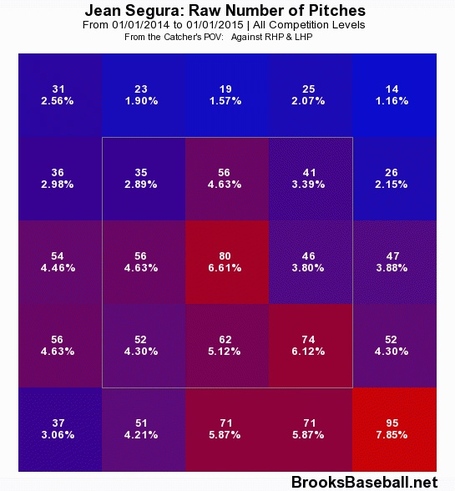 Pitchers are throwing him inside more in 2014 and Segura has tried to take it where it's pitched. Unfortunately, he's struggling to make it count. After last season, it's no wonder the league adjusted and decided to see if he could handle pitches inside. To their benefit, it looks like he's still trying to figure it out.

The other issue worthy of mention is contact. Segura's contact profile has changed in 2014. He's seeing more pitches in the zone, likely because he's struggling, and he's responded by swinging more. While his zone swing rate has stayed the same, he's chasing out of the zone more frequently. He makes a lot of contact in the zone, but he's making less contact than before outside of it. Chasing more and making less contact is a bad recipe. Maybe it signals that he's pressing, but I think it's something else: poor pitch recognition.

Brooks Baseball classifies Segura's eye at the plate against fastballs as "exceptionally poor" and his eye against breaking pitches as "very poor." It appears that Segura struggles mightily to identify pitches and this likely leading to his declining plate discipline. This brings us full circle somewhat in that his walk rate has dipped from 4% to 3.6% in 2014. He didn't have any room to give in this department but has conceded it anyways. The swing-happy approach has its merits for a speedster like Segura, but if he can't recognize pitches, it's going to limit even the slappiest of approaches.

It would seem that Segura is having a tough time adjusting to the way pitchers are throwing him and he doesn't have the eye to make adjustments. He's still just 24, but he has a lot of work to do to get back to being a top-tier shortstop. Adjustments will have to be made and although part of that is in his swing's ability to handle pitches inside, the growth will be hampered if he can't refine his eye at the plate. Young players can change with coaching and experience and while the league adjusted to Segura after his breakout 2013, it's his turn to do the adjusting. Let's hope he can do it.

Jeff Wiser is a featured writer at Beyond the Box Score and co-author of Inside the 'Zona, an analytical look at the Arizona Diamondbacks. You can follow him on Twitter @OutfieldGrass24.