The last in a series reviewing players by position.

As I finish up this series reviewing players by position, I end with the position that probably contains the closest thing to five-tool talent -- hitting, base running, speed, power and fielding. My choice of Yasiel Puig's picture should not be construed as an endorsement of him as the best right fielder in the game, although I have a body of work testifying to my admiration for his play. Depending on the circumstances, there are a lot of right fielders I'd be happy to see playing for the Cubs. 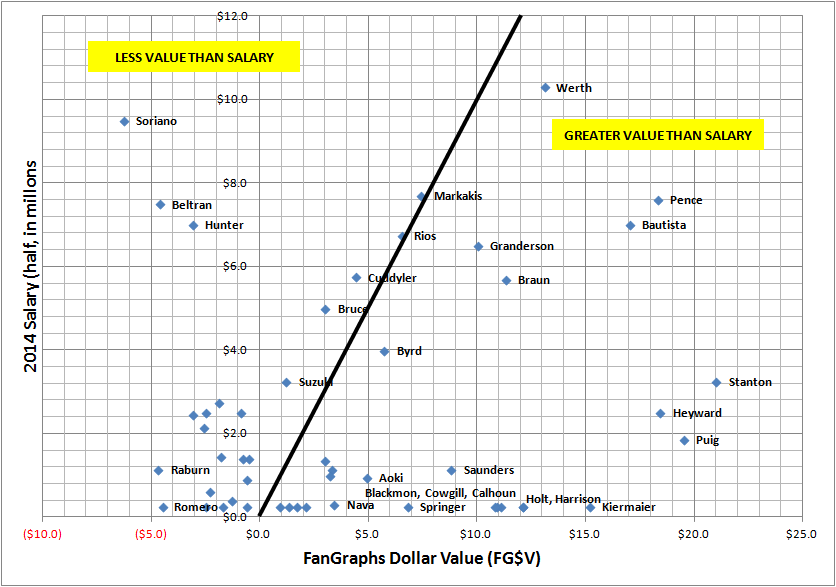 The horizontal axis displays the FanGraphs estimate of the dollar value a player has produced and the vertical shows half his 2014 salary. The black line is the dividing line between salary and production, with the players on the left delivering less value than their salary and those on the right more. All data is through Friday, July 18th, and updated data can be viewed here.

I really don't know which player I would prefer between Puig, Jason Heyward and Giancarlo Stanton. This table shows their FanGraphs Wins Above Replacement components:

As a reminder, the salary shown is half of their 2014 salary. Stanton is under team control through 2016, Heyward through 2015, and the Dodgers have already locked up Puig through 2018. I'm mildly puzzled the Braves haven't signed Heyward to a deal similar to Freddie Freeman's, but possibly they don't see the same upside. His fielding is second-best in all of baseball behind only Alex Gordon. Perhaps it's a simple matter of the market realizing it doesn't need to throw wheelbarrow-loads of money at every young player.

In Stanton's case, it might not be a wheelbarrow as much as a semi. After being dinged up in 2013, he's returned to the form that made him one of baseball's most exciting young hitters. He's probably never going to win a Gold Glove but isn't a complete liability in right, holding base runners at an above-average rate. As of this writing he leads the NL in home runs and RBIs and takes walks, uncommon for the modern power hitter. He's going to be a very rich man when he becomes available, the only question being whether he'll stay a Marlin through 2016 or if he'll be traded sooner. I've been hearing abject speculation rumors on Chicago sports talk radio about him coming to the Cubs, and I'm not sure I even want to contemplate what that would cost in return, particularly with Jeff Samardzija gone -- maybe they'll take Darwin Barney. No matter what, the value in holding onto a player until he declares free agency isn't what it used to be (basically a first-round sandwich pick), so the Marlins may be inclined to trade him. No matter what, they have two-plus seasons to see what they can get.

There are three players grouped together in the low price-high value section, Kevin Kiermaier, Josh Harrison and Brock Holt. Of these I find Holt the most intriguing, as the Red Sox are moving him all over the place in the field and in the lineup. He started the year at third base, slid over to first (and batting leadoff), moved back around 200 feet to left field and ended up in right. He's a fixture as their leadoff hitter now but started the year batting ninth, and in one three-game stretch was slotted 9-1-8. This is his first real chance at regular play, and Holt is producing so far, getting on base with hints of power. So of the myriad issues the Red Sox have this year, he doesn't appear to be one -- except for what position he's eventually going to play.

Kevin Kiermaier was brought up with the injury to last year's Rookie of the Year Wil Pipp Myers. Taking full advantage of the opportunity afforded him, Kiermaier has been extremely productive, perhaps a 20 HR/75 RBI player. Like just about every other young player, he's impatient at the plate but will probably improve with experience.

Nestled among the young players is a most intriguing rookie, George Springer of the Astros. He's been everything they've hoped he would be, hitting for power with a willingness to take a walk. While much has been made of the historic nature of Jose Abreu's home run prowess in his "rookie" season, Springer isn't far behind, with 19 in his first 77 games, which places him very comfortably among the most home runs to start a career. The low batting average is an issue but it's far too early to worry about that.

I was at a Brewers-Astros game almost three years ago to the day. In the middle of the fifth, in what was at that point a 0-0 game, Hunter Pence was replaced, which confused me greatly. Later I learned he had been traded to the Phillies in a deal that netted the Astros Jarred Cosart and Jon Singleton. One year later the Phillies traded Pence to the Giants, making me wonder if he was destined to become the ultimate trade deadline warrior. He settled in with the Giants and had an outstanding 2013, one of their few highlights. He's having a terrible time driving in base runners this year, doing so only 10 percent of the time, but chances are that's merely a one-year aberration.

Curtis Granderson and Marlon Byrd are two birds of a feather, on the decline phase of their careers and looking for their last home. Granderson was on Chicago sports talk station WSCR this past winter, and as a Chicago native was asked if he had any interest in signing with a Chicago team. He politely demurred and stated he was most interested in playing for a contender, which explains why he signed with ... the Mets. Apparently the unasked question was when the team had to be in contention.

Byrd was poised to begin his post-baseball life after being traded by the Cubs after an awful start in 2012 and released by the Red Sox two months later. In 2013 he signed as a free agent with ... the Mets and had a phoenix-like resurrection, so much so that he signed a three-year, $24 million dollar with the Phillies this past offseason. This is precisely what Philadelphia needs, an older player whose skills are deteriorating and one who will keep young talent from coming up. But at least Byrd's delivering value this year. We'll see what 2015 and 2016 bring.

I'm not enough of a baseball historian to know how often players have made the switch from left to right in mid-career like Ryan Braun did, which, combined with his suspension last year, made him a player to keep an eye on. In his case, Braun has responded quite well, as he's hitting at an above-average rate and playing the field effectively. The power is down, with the fair question being whether the home run totals through 2012 were an accurate reflection of his ability.

There are quite a few players grouped along the line, going in order from Nick Markakis to Alex Rios, Michael Cuddyer, Jay Bruce and Ichiro Suzuki. This is precisely where players like this should be, older players making more money but still delivering the performance necessary to justify it. The one who could be a cause for some concern is Bruce, as his average and power have dropped precipitously and lopped 100 points from his OPS. The Reds have suffered a rash of injuries -- this is from Baseball-Reference:

if they're to remain competitive in the NL Central Bruce will need to return to the consistent form he's shown throughout his career.

Torii Hunter and Carlos Beltran are cases of inevitability. In 2012 Beltran was an odd signing for the Cardinals, an aging player for relatively big dollars ($13 million) if not a long time (two years). He responded by having two of his best seasons and was a key component to their success and a prime illustration of the Cardinals way of team-building -- home-grown talent supplemented with key (and few) free-agent signings. They weren't going to get fooled again and let him walk after 2013, at which time the Yankees signed him for more money ($15 million) and more years (three). What made Beltran's signing all the more intriguing is the Yankees already had a right fielder set for 2014 -- Alfonso Soriano. Maybe they knew in advance they were going to release Soriano in mid-season.

The "rocket for an arm" requirement for right fielders seems to be lessening somewhat-- consider this graph: 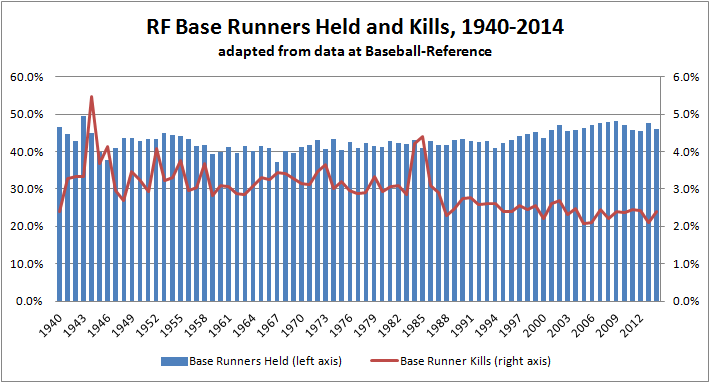 It's a two-axis chart, with the left showing the percent of base runners that are held on balls hit to right field, which demonstrates a general increase over time. The right axis shows the percent of base runner kills and shows a steady drop over time. Changes in baserunning habits have to be taken into consideration, and I'll likely return to this topic during the offseason, but an argument can be made that smart playing (fielding the position in a manner to reduce the chance of advancing on base) is winning out over raw ability (the ability to throw a ball 300 feet on the fly).

There will always be players that don't fit the mold at every position, but the three players discussed in the beginning would be considered cornerstones on any team. Five-tool talent almost by definition can't exist at any other position since some sacrifice of offense for defense occurs up the middle and every corner position except right is tilted more toward offense than defense. I don't know which of Giancarlo Stanton, Yasiel Puig or Jason Heyward is the best, only that given the opportunity today, I'd be happy to throw a nine-digit pay day their way.