Approaching Albert Pujols: Is the cutter a conscious attack?

We've already established that Albert Pujols has seen the cut fastball more often over the last four years, but are teams intentionally approaching him that way, or is it simply a result of the environment he is playing in?

Share All sharing options for: Approaching Albert Pujols: Is the cutter a conscious attack?

As a follow up to my analysis of Albert Pujols' struggles over the last four years (in which I suggested the rise in cut fastballs he's seen was the culprit), I wanted to see if there was any evidence to suggest pitchers specifically made the decision to throw him the cutter more often or if the American League simply threw the cutter more than the National League. As noted in my previous article, Pujols saw a relatively dramatic rise in the percentage of cutters he saw between 2011-2014. He switched leagues in 2012, so I thought it might be as simple as the AL throwing more as a league.

*It's important to note that as Pitchf/x data got better, the data got more accurate. Generally, we can assume the information from 2008 forward is good, but information from 2011-on is probably the most accurate in terms of pitch selection. However, we'll work with the data currently available and present it as it has been presented to the rest of the public.

First, take a look at a break down of how the National League and American League used the cut fastball as a percentage of all pitches thrown over the last seven years.

The first thing that stands out is the significant dip in use of the cutter in the American League in the very same year Pujols switched leagues. That does not seem to support the idea that the AL simply threw the cutter more to align with our conclusion that Pujols saw the cutter more after he went to the Los Angeles Angels. You'll see the AL's use of the cutter is trending down (aside from the uptick this year), and the NL's use is trending up. Additionally, the AL hasn't thrown the cutter with frequency even close to approaching what Pujols has seen over the last few seasons since 2009.

So, if the American League is not throwing the cutter more than the NL, then perhaps pitchers ARE approaching Pujols with that specific pitch in mind. Or, maybe it's simpler than that. Perhaps, the American League West throws the cutter at a higher rate than any of the other divisions in the AL. Considering the majority of Pujols' games take place within the West, we'll look at that division's usage. 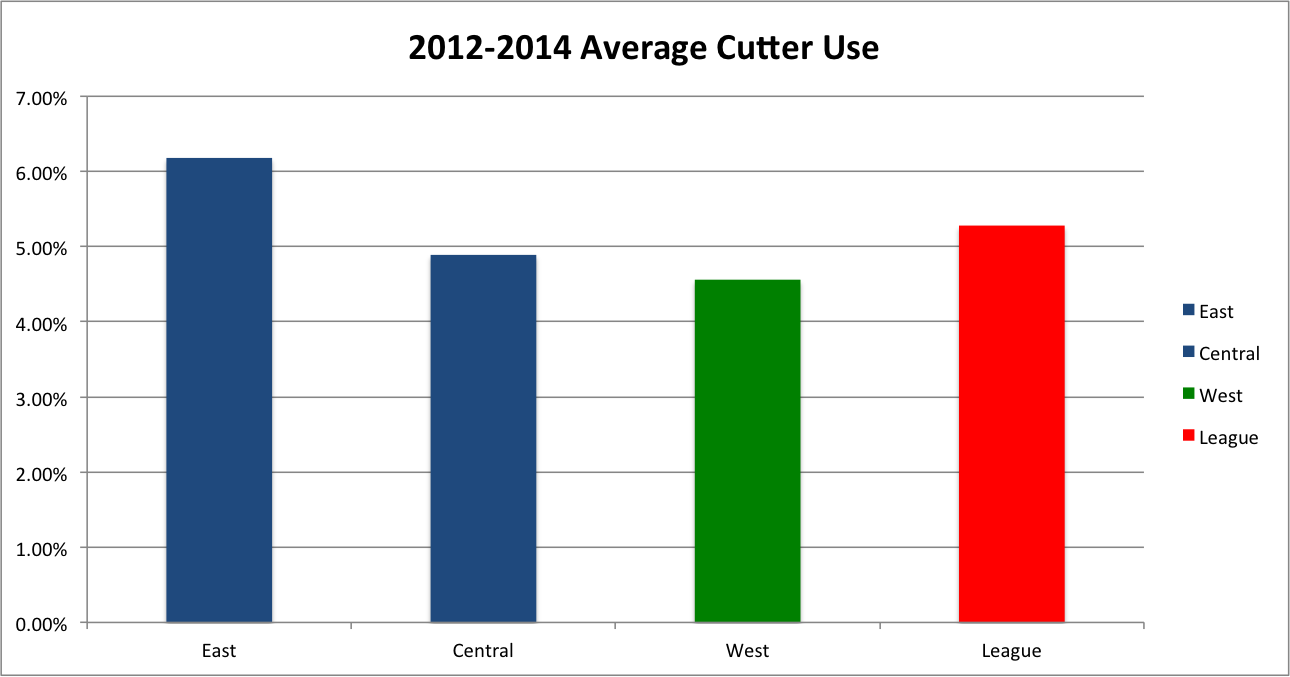 Well, that's not it. The American League West, on average, has thrown the cutter less frequently than any other division in the AL. If we are operating under the assumption that Pujols saw more AL West pitching than from any other division over the last three years, there's nothing to suggest him getting the cut fastball more frequently is anything more than coindicence.

No prospects in the Top #100 were traded.

Or it could just be that pitchers are specifically targeting him with it. Pujols has faced the Houston Astros and the Oakland Athletics the most this season. Against the A's, he is struggling. Against the Astros, not as much. However, it's important to realize that one team is not likely to be the culprit for the increase in cut fastballs Pujols has seen. The rise in the cutter could simply coincide with match-ups against more pitchers who use the cutter frequently, whereas the rest of the league's average might be lower than that of Pujols.

One thing to note is that the Angels, as a team, actually rank high on the cutter usage list for the last three years. They are consistently in the top five for usage. If someone identified the cutter as a problem for Pujols, it would not be unheard of for him to have reached out to pitchers on the Angels' staff that throw the pitch in order to get some tips. Pujols is clearly a student of the game. Perhaps he is drawing on the experience of his teammates in order to hit the cutter better.

Regardless, Pujols will have to figure out more than the cutter. As a reader pointed out on my last piece, the cutter still represents a smaller sample of pitches seen for Pujols. So, while he's had the most trouble, struggling to a lesser degree on a pitch he sees far more often (like the four-seam fastball) would likely have a larger impact on his overall production. There is no silver bullet solution for Pujols. But, we can say with some confidence that his transition to the American League is not the sole reason for seeing more cut fastballs. It's intriguing to think that after years in the league, pitchers finally figured out a weakness, but we simply can't say that for sure.

Justin Hunter is a contributing writer at Beyond the Box Score. He also writes about all things Padres at The 5.5 Hole. You can follow him on Twitter at @the5_5hole.