Who hit the longest home run at AT&T Park during the HitTracker era?

Ryan Howard's season was just getting started. The previous season's Rookie of the Year had just launched his 30th home run in grand fashion en route to being named 2006's MVP. Over the course of the season, Howard astonished fans by blasting 58 home runs, but this home run in particular stood out from all the rest.

On July 15th, 2006, Brad Hennessey took the mound for the San Francisco Giants in the top of the fifth inning to face the Phillies lineup. One inning later, Ryan Howard (who had just won the Home Run Derby only five days earlier) was slated to be the third man to the plate. With one out and a man on first, Howard faced a full count. The Phillies first baseman took a strong swing and barreled the ball straight over the centerfield wall, eventually landing 474 feet away. The blue dot on the AT&T Park diagram below represents the location where the ball physically landed but the green dot represents the place where the baseball would have landed if it were unimpeded by the right-field wall. 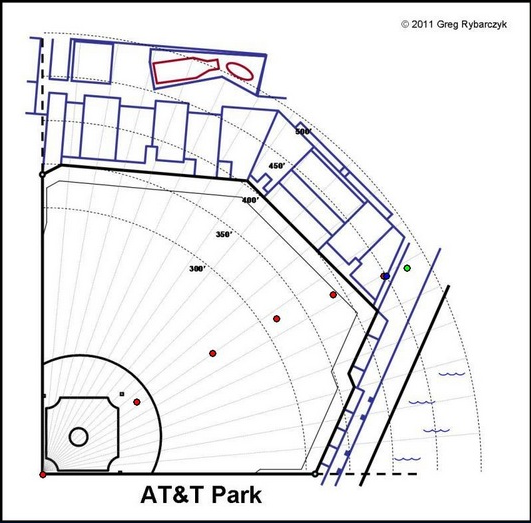 AT&T Park is one of the more oddly shaped ballparks, and the corner between centerfield and right-field is one of the farthest outfield walls in baseball. For that reason, it was a decent feat for Howard to send the ball to where only 17 of AT&T Park's 129 home runs landed in 2006. To demonstrate the additional power, he sent the ball flying off the bat at 114.7 mph, 10.1 mph faster than his average home run in 2006. In addition, the ball traveled 16.8% or 68.3 feet farther than Howard's average home run.

Obviously, 2006 was a tremendous year for Howard and his performance versus right-handed pitchers even furthers exemplifies his talent; he slugged an extreme .711 against all right-handers with a 1.164 OPS. Accounting for the fact that 39.5% of Howard's fly balls were home runs just goes to show his immense power.

On the other hand, Hennessey's season was very forgettable, compiling a 4.26 ERA and 5.44 FIP along with the horrible rates of 3.81 BB/9 and 3.81 K/9. He was constantly shifted from reliever to starter and back again, which most likely damaged Hennessey's overall numbers. The former Giants first round pick last appeared in the major leagues in 2008 and retired from baseball with the AAA Oklahoma City Redhawks in 2011.

Ryan Howard was certainly favored heading into the at bat as can be seen from his splits. With one out and a runner on first, Howard hit .452 with 9 home runs over a span of just 40 plate appearances. In the 6th inning alone, Howard slugged .877 with 13 home runs (the most of any inning), and in a full count, he maintained a 1.158 OPS. All of these scenarios lent themselves to a chance of higher productivity at the plate. They're not super meaningful samples, but pretty much everything lined up in his favor.

His 30th home run of the season helped write off the Giants from contention in the game, lowering their chances of winning by 13%. After the at-bat, Philadelphia had a 91% chance of winning the game with 7 runs scored against their opponent's 5 runs scored. Below, the red bar in the top of the sixth inning displays the home run's effect on the Phillies chances of winning. Unfortunately for us, this blast came prior to the Pitchf/x era, so we can't provide full details on the pitch.

A towering shot supplied by the game's once-most powerful hitter rekindled memories of Barry Bonds' prime in San Francisco. Ryan Howard, feared by all pitchers in 2006, blasted this ball as far as the stadium would let him.