What's up with Josh Donaldson?

The A's slugger is having another strong season, but had a hiccup in June.

Share All sharing options for: What's up with Josh Donaldson?

Josh Donaldson is having another spectacular season. His fWAR of 3.6 ranks eighth best in baseball this year. As stellar as he has been at the plate, he has also been fielding his position. His out-of-nowhere to all-star trajectory just par for the course for Billy Beane and the A's, who had the foresight to trade for him, and the patience to wait for him to blossom into the player he is today.

As good as Donaldson has been this year, June turned into a nightmarish month. Donaldson's wRC+ of 42 was the sixth lowest among qualified hitters in baseball. He endured an 0-33 slump that culminated in an ejection for arguing balls and strikes the night before a slow bouncer finally turned into a base hit. It just seemed like Donaldson couldn't do anything right at the plate in June. He hit only three home runs (he has an impressive 18 on the year), batted .181, and struck out 23 times compared to only five walks.

So the question is what's up with Josh Donaldson?

What sticks out right away looking at Donaldson's performance in June is the lack of hard hit balls. His line drive percentage dipped to 6%, after 12.2 and 22.9 rates in April and May, respectively. He traded line drives and fly balls for ground balls. A stunning 65.1% of his batted balls in play were ground balls in June. He has averaged ground balls on 44.2% of balls in play over his career.

Ground balls are often the result of pitches down in the zone. We can see from the zone profile below how often a ground ball off Donaldson's bat came on a pitch low in the zone, and interestingly, often times outside of the strike zone. 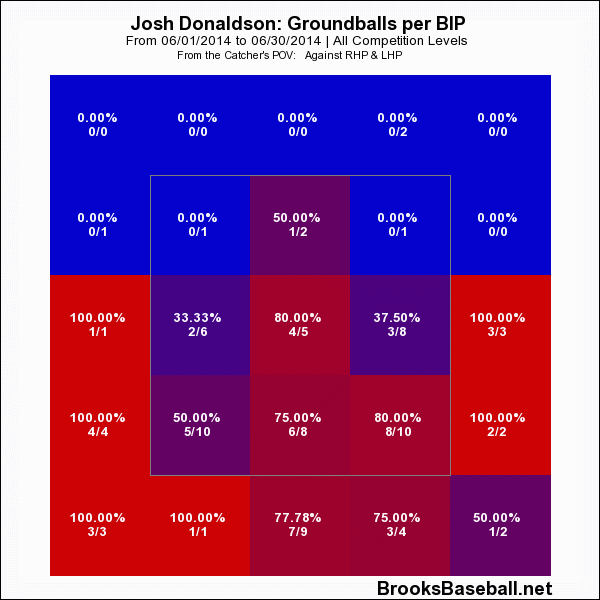 We can compare the zone profile above with his profile on ground balls for the first months of the season before June in the chart below. As expected, it is still more common for pitches to turn into ground balls that are low in the zone, but the amount is not nearly as stark as it has been in June. 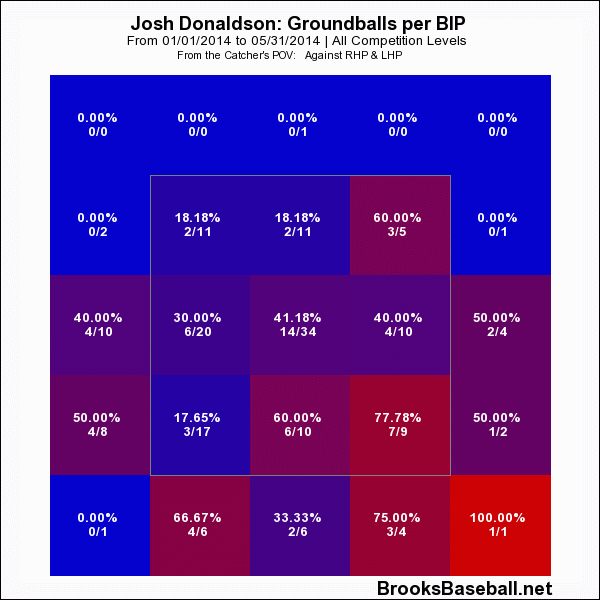 Why is Donaldson hitting so many more ground balls in June? Good question. We can see which pitches he is struggling against most; in June, he has a weak .105 slugging percentage against breaking pitches, and nearly as bad, he is slugging .133 against offspeed pitches. But he doesn't discriminate his ground ball tendencies. While he is hitting more ground balls on offspeed and breaking pitches in June than hard stuff, the spike in grounders has come proportionally across all pitch types. 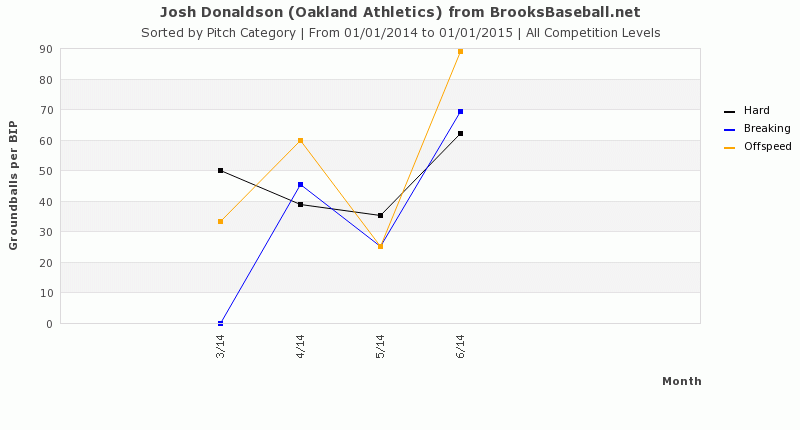 While it is difficult to pinpoint why Donaldson is hitting so many ground balls, the problem is there. It has contributed to a terrible month of June for him at the plate. Still, it is only one month, and he projects out to a 116 wRC+ for the rest of the season. June is likely to be an anomaly, but an interesting one for a player with so much success. It is a reminder that even the game's best players can find months when they are lost at the plate. Or months when they can't stop hitting ground balls.