How productive can Joc Pederson be?

Amidst Pederson's great season at AAA Albuquerque, there are grumblings that he may not live up to our expectations.

Share All sharing options for: How productive can Joc Pederson be?

Joc Pederson's future has been a frequent debate recently. A conversation on Minor League Ball, our affiliate site on prospects, first revealed to me that some people seriously doubt his abilities. Some consider the prospect just another backup whilst others praise him as the next great outfield threat.

Pederson was drafted in the 11th round by the Los Angeles Dodgers in 2010 and has far exceeded expectations. Outside of a small smattering of plate appearances in 2010, Pederson began his professional career late at Rookie-level Ogden in 2011. That year was first sign that an interesting player would emerge from the bland 11th round pick as he flashed legitimate tools across the board. He finished 2011 with an astounding .910 OPS, 11 home runs, and 26 stolen bases across two levels. 2012 was when everyone began to take notice; the former pick almost destined for a career as minor league fodder was now raking in the California League.

However, people accredited his performance more to the league's infamous status as being hitter-friendly than to Pederson's actual skills. They were once again proved wrong in 2013 though, as Pederson kept mashing at AA Chattanooga. His season ended with rankings deep in the top 100 prospects according to many scouting services. No matter where Pederson has gone, he has exceeded expectations, and that trend hasn't stopped in 2014. Off to a great start to the year, Pederson hit to the line of .398/.504/.663 in April. Since then he has cooled, but there is no indication that Joc can't be great.

In my own opinion, there is no reason to doubt Pederson. He can do everything well and he can do a lot of things better than that. Pederson can be shuffled to any position in the outfield and his plus power has translated to a .516 SLG and a .210 ISO over the course of his minor league career. Not only that, but he has above average speed to boot, swiping at least 26 bases in each of his three full seasons. Pederson also has good plate discipline, sporting a 1.58 strikeout to walk ratio since 2010.

However, some people are still worried Pederson will fail to produce once he reaches the major leagues. They cite the strikeout rate as evidence because of its gradual increase from season to season. But he can have a productive major league career even with the current strikeout rate.

Thanks to fellow Beyond the Box Score writer, Chris St. John, we can now estimate quantitatively what the chances are that Joc Pederson will perform using the JAVIER system. JAVIER measures the likelihood of a prospect being productive by looking at past minor leaguers zBB, zK, and zISO. These three numbers can create a quadrant of results that can pinpoint the most accurate estimate. Below, I plugged in Joc Pederson's 2014 statistics with a +/- 1.0 zScore leeway in results. These are the results. 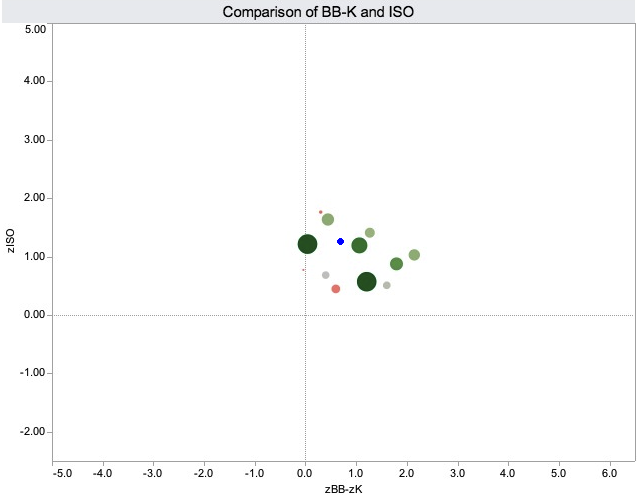 The blue dot is the closest representation of Joc Pederson's 2014 zBB, zK, and zISO. On the season, his zBB is 2.41, zK is 1.47, and zISO is 1.35. As you can see, he stands in pretty good company: Bobby Abreu and Fred McGriff are the two largest circles and David Justice is the next largest, indicating the possibility of an excellent long term career. Obviously, that is not always the case as there are certainly busts among the group, but overall, Pederson has nice comparables on which to lean.

After inputting Pederson's career numbers through the minor league levels (JAVIER accounts for year, level, league, and age, as well as, zBB, zK, and zISO), the output turns out to be a series of consistently increasing productive percentages. Starting in 2011, Pederson had just a 8.9% chance of becoming a productive major league player. Although these statistics should be taken with  grain of salt, Pederson's future didn't seem very promising at the time. However, as Pederson advanced, so too did his chance of success, peaking at 51.9% this year. Considering lauded prospect Kris Bryant only achieved a 50% chance of being productive at AA, Pederson's 51.9% looks hopeful.

As always, baseball is a game of chance. These percentages provide insight as to the chances that prospects become successful. This is in no way a definitive make-or-break system because even the most unlikely event is still possible and a 49% chance that he doesn't become productive is quite substantial.

Considering that Pederson has a 66.7% chance to be at least average, his future looks bright. No longer should he be labeled as a fourth outfielder simply because none of his tools stand out in particular or because his strikeout rate is above league average; Pederson has always produced and has a good chance of continuing that trend in the MLB based on the history of players like him.