In a continuing series, this post reviews center fielders.

As I continue my progression through the positions to see who's delivering outstanding performance and who isn't, I look for two things in particular -- how many players are delivering positive vs. negative value, and how many good young players there are. I use these as proxy measures to determine if there is young talent bubbling up, and in the case of center field, there most certainly is.

This is the scatter graph plot: 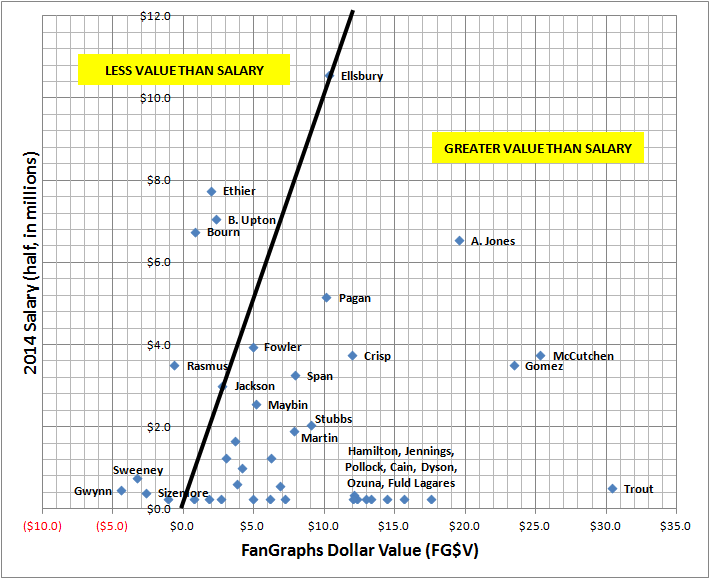 The horizontal axis shows the FanGraph estimate of dollar value delivered, and the vertical axis is one-half of the player's 2014 salary, with the salary data from this Deadspin article. All data is through Sunday, July 13th and can be seen here.

Every writer at Beyond the Box Score is contractually obligated to write about Mike Trout at least once a week, and since many of our writers only write once a week, this limits their subject matter considerably, so I won't step on their toes. I won't belabor the obvious other than to mention his new contract will keep him a very good value through 2016 ($15+ million) and doesn't hit the stratosphere until 2018 ($33+ million). I have one question going forward -- will he actually play out this contract, or will this one be re-negotiated somewhere around 2017 and potentially make him the first $50 million player?

There's a lot in common between the Brewers' Carlos Gomez and the Pirates' Andrew McCutchen -- similar ages (28 and 27, respectively), division, salary, power, speed, hitting for average, it goes on. In McCutchen's case it was only a matter of time, as he was expected to become a star almost upon his big league debut and has essentially delivered on that promise. Gomez was different, as the Brewers are his third team and he didn't really begin to show power until 2012, his sixth season and first chance to get sustained playing time. The Twins traded him for J.J. Hardy, a trade they must constantly regret on a daily basis. They had confidence Aaron Hicks would be their center fielder of the future, and the future hasn't arrived yet -- Hicks is the point right below Grady Sizemore's name.

Adam Jones has been amazingly consistent for the past five years or so and is seemingly overshadowed by a different Oriole each and every year -- in 2009, it was Matt Wieters, 2010 saw Ty Wigginton and Luke Scott have years no one saw coming (which didn't come again), 2011 had Mark Reynolds and J.J. Hardy (back when he could hit home runs), 2012 Chris Davis and 2013 Manny Machado. It's not like Jones flew under the radar as he was named an All-Star four times and a Gold Glove winner in three, including the past two years. Even this year he's being overshadowed by Nelson Cruz, but he's been one of the most consistent center fielders in this time span and a crucial part of the Orioles' success this year.

Under what crazy circumstances (obviously in a Bizarro World) would the Angels trade Mike Trout? Is there any return possible that would make it worthwhile?

Center fielders Colby Rasmus, George Springer and Mike Trout are all among baseball's most powerful hitters.

Trading Mike Trout Who has been the most powerful hitter in baseball?

There is a large group of young, cheap and productive players in the lower middle. Their value is in reverse order of how they're listed -- for example, Billy Hamilton is the dot furthest to the right (i.e., delivering the greatest value), followed by Desmond Jennings, A.J. Pollock, etc. Hamilton showed a glimpse of what he could be in a September call-up last year. He was electric but used primarily as a pinch runner as he only played a significant part in three of the thirteen games in which he appeared. When he did have a plate appearance he had an outstanding .429 OBP, but in only 22 plate appearances, and the question going into 2014 was if he would be patient enough at the plate to take a walk and turn it into a de facto double. Left unsaid is he plays outstanding defense, second amongst center fielders. He simply has to learn how to take more walks, since a person with no power has absolutely no excuse for striking out almost four times as often as he walks. If he learns how to do that, the sky's the limit as to how many bases he can steal.

A.J. Pollock was having a very good year prior to going down to injury in early June and isn't expected back for another couple weeks or so. He was on track to hit around 15-20 home runs and had a wOBA of .399, AAGAANNMT (Almost As Good As Anyone Not Named Mike Trout -- this has to become an acronym, because we're going to be saying it for the next 10-15 years). It's always a guessing game to see how someone will return from any injury, let alone a fractured hand, so it's an open question to see if he'll return to form this year.

Very rarely does one team field the same player in two different bodies like the Royals are with Lorenzo Cain and Jarrod Dyson. Okay, their body types differ, but both hit for average, don't take walks (although Dyson is better at it), have speed and play very good defense, with Dyson the best defensive center fielder so far. They're even about the same age. There's an old adage, if a team has two of something, chances are they don't have any, and that's probably too strong for these two, but there's a deal to be made for the Royals once they decide which one to go with and trade the other to shore up positions that need help (like third base).

Sam Fuld is a baseball vagabond, on his fourth team and second this year after being waived by the Athletics in April. He was mentioned in John Feinstein's most recent book on minor league life Where Nobody Knows Your Name and even reviewed it for the Wall Street Journal (may be behind a paywall), so he's a man with a future after baseball. It won't be this year as he's having one of the best seasons of his career, quite likely to the surprise of both he and the Twins. He's 32 and definitely needs to begin making his post-baseball plans, but he's pushed those back at least temporarily.

About a month ago I wrote a post stating the Marlins were the best outfield in baseball, in large part due to Marcell Ozuna. I don't claim to be an expert (or even knowledgeable) on prospect analysis, but after being called up to replace an injured Gioncarlo Stanton last year, no one really knew what to expect. He's shown excellent power and plays the position well and is still very young at 23. At some point, despite being owned by Jeffrey Loria, the Marlins will return to respectability, especially if they can develop pitching to augment the staff beyond Jose Fernandez. Ozuna has the potential to be part of an extremely solid outfield which can play together for years to come, or at least 2017 when Stanton becomes eligible for free agency.

I must admit I'm completely flummoxed by the tendency of young players with no power to not take walks. I commented on it earlier and Juan Lagares exemplifies this trend -- two home runs, nine walks and 51 strikeouts. He's not exactly young at 25, so it can't be stated with certainty that he'll adjust and learn, but he better. It's an open question if he'll ever see a competitive Mets team.

There are precious few highly-paid players on the wrong side of the graph, and there's a story behind all of them. I wrote about the Dodgers outfield in the post on left field and suspect Andre Ethier could perform better with a steady position. Michael Bourn is on the DL with a pulled hamstring, but B.J. Upton is the Dan Uggla of the Braves outfield, entering offensive free fall upon joining his brother in 2013. He's batting .199 since joining them, and with his sizzling .277 OBP and baseball-leading 116 strikeouts is batting leadoff. He's owed over $45 million through 2017, so Braves fans have plenty of time to build up even more antipathy toward him, if that's possible.

Clearly the Red Sox believed they had their center fielder of the future in Jackie Bradley Jr., so much so that they made little if any attempt to keep Jacoby Ellsbury after 2013. He picked a good year to be a free agent and probably drove up his price higher than Boston was willing to pay. I'm not a fan of big-money contracts for players 30 and over unless they're structured in a team-friendly manner, and I certainly wouldn't advocate the deal Ellsbury received from the Yankees, but it's working so far. Being right on the dividing line is fine -- it reflects he's delivering as much value as he's being paid, and the higher a player salary, the more difficult that is to achieve. Bradley is an unlabeled point near Leonys Martin, so the Red Sox can't really blame their woes on losing Ellsbury, since Bradley appears to be everything he was supposed to be -- defensively. Offensively, not so much.

Defense has always been an important facet for center fielders, and even more so as runs scored revert back to historical  norms. I'm extremely excited for the rollout by MLB Advanced Media of tracking data that measures everything that happens on the field. I don't know exactly how it will work and will rely (as always) on those smarter than me to point me in the right direction, but if a center fielder's range is important, we should be able to track it better than ever before and measure things like average throw distance, time to balls, how far to balls and other items that can better refine a player's defensive capabilities. The current crop of center fielders, particularly the young ones, will fare well no matter what metrics are used.

All data from FanGraphs and Baseball-Reference.