When the All-Star game starting pitchers were announced this past weekend, predictably, there was much internet outrage over Mike Matheny tabbing his guy Adam Wainwright over Dodgers' star Clayton Kershaw. Wainwright and Kershaw are excellent pitchers, each of whom has a case to be named the starter. However, as I mentioned in my article last week I am not really interested in looking too deeply at such perceived snubs or injustices.

In the end, one guy will pitch 2 innings on Tuesday night and the other guy will pitch 1 inning. In fact, by the time you are reading this you will already know how it all turned out. The critical point is that it does not really matter. There are more interesting things afoot for us to explore. For example, on Kershaw's resume for possibly earning the starting honors at this year's All-Star game is his 41-inning scoreless streak. Where does this streak rank in the history of the game? How does it compare to other 40+ inning scoreless streaks? Now that sounds interesting. Let's dig into that.

Since 1947 there have been eight scoreless innings streaks of 40 or more innings by starting pitchers. In 1988 the Elias Sports Bureau adjusted its criteria for the scoreless innings record such that fractional innings (i.e., 1 or 2 outs recorded) of scoreless pitching would no longer count toward the streak. Pitchers had to complete the inning without having a run score (earned or unearned). These are the eight streaks that match the necessary criteria:

Looks like pitching in the late 60s was a good time. Kershaw's streak did not come close to the record but he is tied with Luis Tiant for the 5th longest streak (since 1947). I wanted to look a little closer at these streaks to see how they compared on measures like batters faced, baserunners allowed, and strikeouts. For each streak I collected the number of singles, doubles, triples, reached on error, walks, hit-by-pitch, strikeouts and total batters faced on an inning-by-inning basis.

Here are these data converted (mostly) to rate statistics:

This provides a clearer picture for just how dominant Kershaw's scoreless inning streak was. Compared to other dominant stretches of pitching, Kershaw's comes out on top on almost all of the measures given in the table. He faced the fewest batters per inning, he allowed the fewest baserunners per inning (baserunners = hits + reached on error + walks + hit-by-pitch), he had the second lowest walk rate, and by far the highest strikeout rate. Although it is the case that Kershaw is playing at a time when strikeouts are more frequent, his numbers are still incredible.

For interest's sake I created two figures that plot out how these streaks progressed across the scoreless innings. On each figure I have bolded Kershaw's track to make it easier to see how he compares with the other pitchers.

First, here is the figure for baserunners allowed: 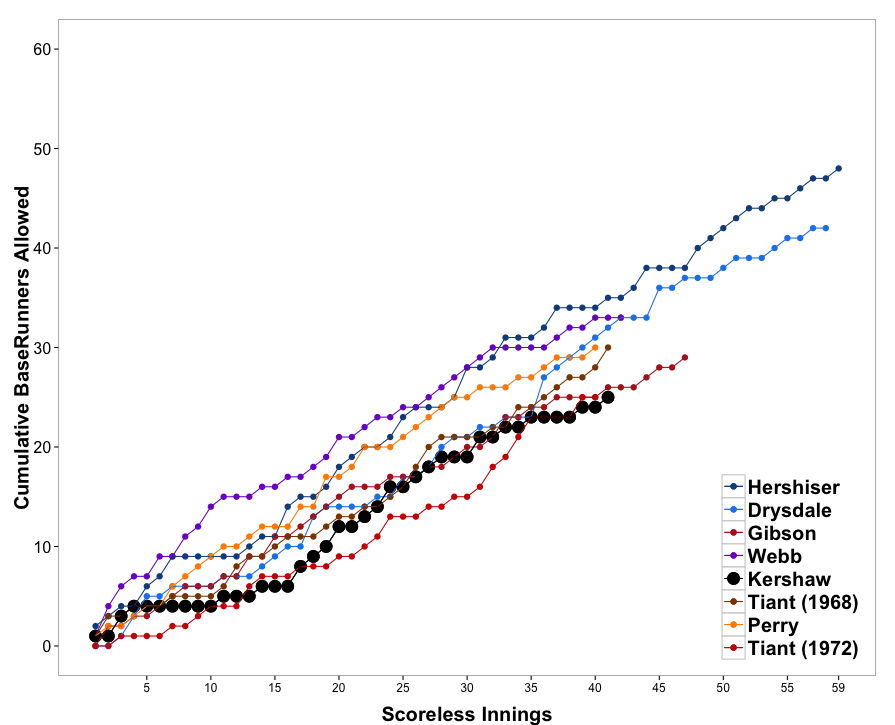 Other than Luis Tiant's 1972 streak, Kershaw's streak is consistently the lowest in terms of baserunners allowed. The trend is primarily driven by the lack of baserunners between innings 5 and 13. Well that is his no-hitter against the Rockies, which with a GameScore of 102 is the second most dominant (9-inning) start since 1914. After that start his rate of baserunners allowed was pretty similar to the other streaks, but I don't think we should be ignoring his no-hitter. It was a dominant outing and part of the streak.

Now here is the figure for strikeouts: 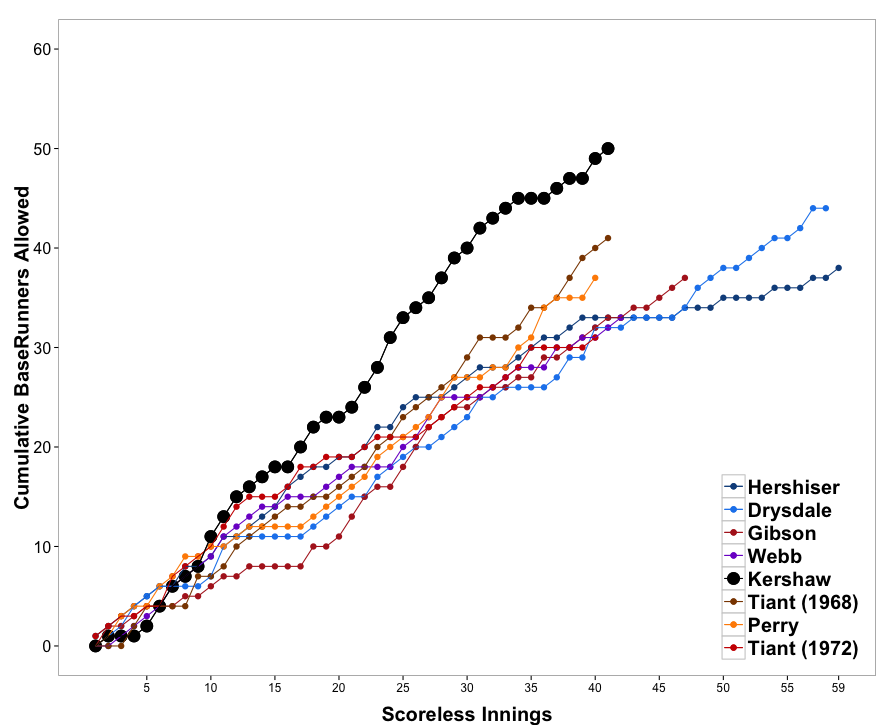 Now this is pretty clear. Kershaw accumulated many more strikeouts than the other streak holders across his scoreless innings streak. He reached a mark (50) that nobody else did; even with 6, 17 or 18 more innings pitched.

Neil Weinberg •Beyond the Box Score

The brilliance of Clayton Kershaw is certainly not news. This work presents another look at one of his many accomplishments, of which there will certainly be many more over the rest of his career. Whether he starts the 2014 All Star game (or any All Star game for that matter) is not something on which we should be expending energy. Kershaw is doing remarkable things when he takes the mound. It is an opportunity to watch greatness every five days, and better yet it is frequently narrated by another great person.