Alfredo Simon has been a pleasant first half surprise for the Cincinnati Reds. His performance is just that, though--surprising.

A few weeks ago, I wrote an article covering Giancarlo Stanton and his deceptively high luck numbers. Today, I'm taking a look at one of the opposite cases, Alfredo Simon of the Reds.

Simon originally filled in for Mat Latos when he went to the DL and pitched well enough to retain a rotation spot when Latos recovered, with Tony Cingrani moving to the bullpen instead. Much of his production is smoke and mirrors, though. Take a look at Simon's rank in some key pitching statistics (among 94 qualified pitchers):

ERA is the clear outlier, and the FIP numbers are probably more indicative of Simon's true talent level. He does have a solid 49.3 GB%, tied for 26th among qualified starters. Admittedly, Simon has outperformed his FIP in all but one of his major-league seasons, including two brief stints in 2008 and 2009 before settling in with the Orioles in 2010. However, as Lewie Pollis recently pointed out in a no-paywall Baseball Prospectus article, even several years of overachieving aren't enough to discount DIPS theory and label Simon as an outlier. When you factor in that in three full seasons at AAA (with the Giants, Rangers, and Orioles organizations), Simon's ERA was higher than his FIP each time, the situation becomes even more murky.

Simon's velocity has dropped off considerably from his first season as a regular in 2010, when he was almost exclusively a one-inning reliever (49.1 innings in 49 appearances) and notched 17 saves. Take a look at this chart from Brooks Baseball of his monthly fastball velocity: 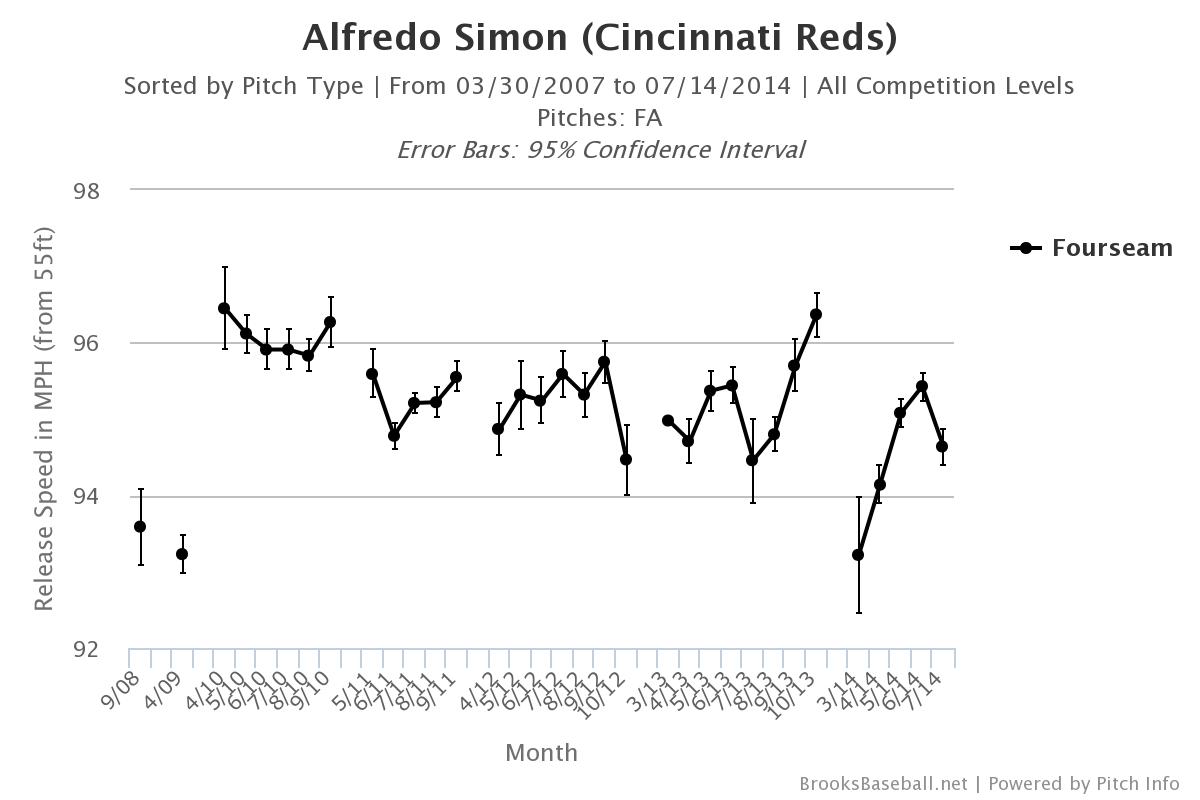 With the exception of late 2013, his velocity has been trending steadily downwards each season. In 2010, his fastball came in at 95.2; this year, it's at 93.7. The same relationship holds with his slider as well, as it's dropped from 86.9 to 77.0. His highest post-2010 figure is only 78.6, though, probably signifying that he changed the slider more toward the curveball end of the spectrum. (He's also thrown eight screwballs, joining Hector Santiago as the only pitchers to do so in 2014.)

How impressive have the home runs hit by 2014 home run derby participants been? Are there players who might have been better choices?

There's another factor that calls Simon's good fortune into question: his conversion from reliever to starter. In 2010, 2012, and 2013, he averaged a mere 1.1 innings per appearance, primarily coming out of the bullpen. In 2011 – the only season to date his ERA has been worse than his FIP – he started 16 games and relieved in only 7. Much of his past success with outperforming peripherals in the bullpen may be a result of his brief appearances, meaning that his low ERA and 12-3 record are even more a result of blind luck. A thin .232 BABIP certainly helps, too; he's at a much more pedestrian .277 for his career.

Another reason it's likely that Simon is getting lucky is how much he's staying in the zone and how few whiffs he induces. His PitchF/X numbers are down pretty much across the board, but he's been worth 2.2 rWAR already as opposed to 1.2 last year. (I chose rWAR here since it's based on R/9, rather than FIP, which better suits my purpose.)

He's been in the zone more, but has induced fewer swinging strikes as well, mostly due to his chase pitches not missing enough bats. Baseball Savant has Simon at only 16.9% called strikes, again reinforcing the idea that much of his success is luck. Simon comes in third among pitchers with at least 1000 pitches in BABIP, behind only Chris Young and teammate Johnny Cueto.

I ended my article on Stanton with a heat map, so I'll do the same here as a visualization of how much Simon has tightened his control this year (2013 on the left, 2014 on the right).