Who has hit the longest home run at Angel Stadium in the HitTraker era?

Texas was up 3 to 2 against the Angels, hoping to end a four-game skid on June 3rd, 2012. Nelson Cruz stood at the plate in a strong, upright stance. He watched as Angels' right-hander Bobby Cassevah threw his third ball in a row. The count now stood at 3-0, and Cruz faced an almost imminent walk to first base. The next pitch Cassevah threw floated down the plate and Cruz took it deep. He flashed some incredible bat speed as the ball ripped through the air out to deep left-centerfield. The baseball eventually landed 484 feet away in the "California Spectacular" display of Angel Stadium.

That is the longest home run hit at Angel Stadium in the HitTracker era (Since 2006). You can watch the home run here. The diagram of Angel Stadium below depicts the route Cruz's monstrous home run took before it landed 484 feet away. 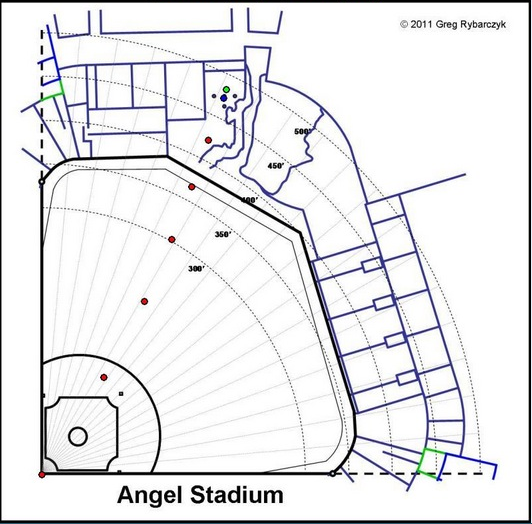 The top sluggers rank very well, but the top spot is controlled by someone who isn't a household name.

Nelson Cruz entered the game batting .272 on the season with seven home runs. The Texas Rangers' right fielder is known for his power, having hit over 20 home runs in each of his past three seasons. When Cruz saw Cassevah's fourth pitch hurdling towards the upper-right corner of the strike zone, he took notice. Milliseconds later, Cruz took a strong swing of the bat and whacked the baseball into the air and out of the field.

Looking at the Baseball Savant figures below, the left strike zone displays Bobby Cassevah's pitch to Cruz and the right strike zone displays where all 24 of Nelson Cruz's home runs in 2012 were hit from. As you can see, Cruz has a higher tendency to blast home runs on pitches located in the upper half of the strike zone, especially the two outside corners. And that is exactly where Cassevah planted his pitch.

Unfortunately for Cassevah, that would be the second-to-last appearance of his major league career (to date), only appearing in one final game three days later.

With a flick of his wrists, Nelson Cruz sent the baseball speeding away at 116.3 mph, 9.5 mph faster than his average home run in 2012. The ability to draw forth more speed from his wrists enabled Cruz to launch the ball 8.9% faster than his average home run. Because Cruz hit the ball with such a stronger force than usual, the ball traveled 15.6% or 65.4 feet farther than his average 2012 home run. The diagram below depicts where all of Nelson Cruz's home runs from 2012 landed. The red dot is the landing spot of this particular shot, measuring out to be much farther than any of his other home runs that year (The closest home run was a 470 blast off of Ernesto Frieri - the longest HR at Arlington in 2012). 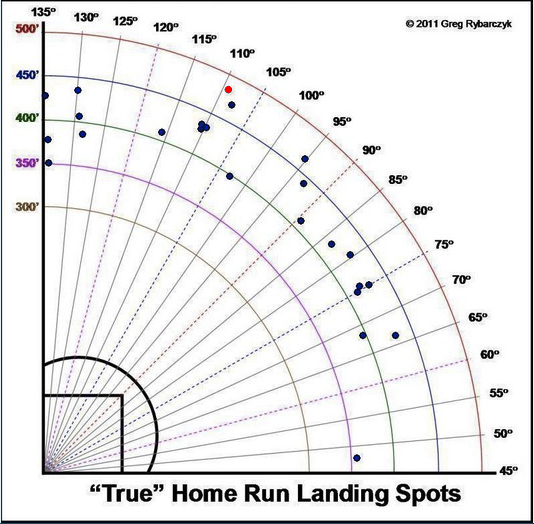 Additionally, Nelson Cruz benefited from his excellence at combating sinkers. Fortunately for him, Cassevah's 91.5 mph pitch just happened to be a sinker. In 2012 alone, Cruz batted an insane .361 against sinkers and slugged an even more impressive .608. Considering that he saw sinkers 21% of the time versus right-handers in 2012, Cruz was able to inflict some serious damage. All of these factors come together to create the "perfect pitch" for Cruz to swing at. The combination of a 91 mph sinker in Nelson Cruz's most favorable zone created the ideal circumstances for which Cruz could mash a home run.

The unfortunate part about this home run was that it occurred under the guise of performance enhancing drugs (PEDs). Hopefully, though, Cruz is clearing his name by tacitly declaring that he does not need PEDs to compete. He is currently the MLB leader in home runs with 28 and has clearly outplayed his one-year, $8 million contract. Nelson Cruz always had the power to blast a moonshot to the upper-decks and he was holding all the right cards at Angel Stadium that day.