In an continuing series reviewing players by position, this post discusses this year's best left fielders.

Left field can be a one-dimensional position where gloves are optional, but it doesn't have to be. Use a player who can hit for power (almost a prerequisite in the modern game) with a decent arm and good things can happen. As much as baseball dogma conventional knowledge posits that left field is the home of slow-moving hitters with no throwing arm, it doesn't have to be that way. On average left fielders field around four balls a game between hits and outs -- they might as well be good at fielding the position. 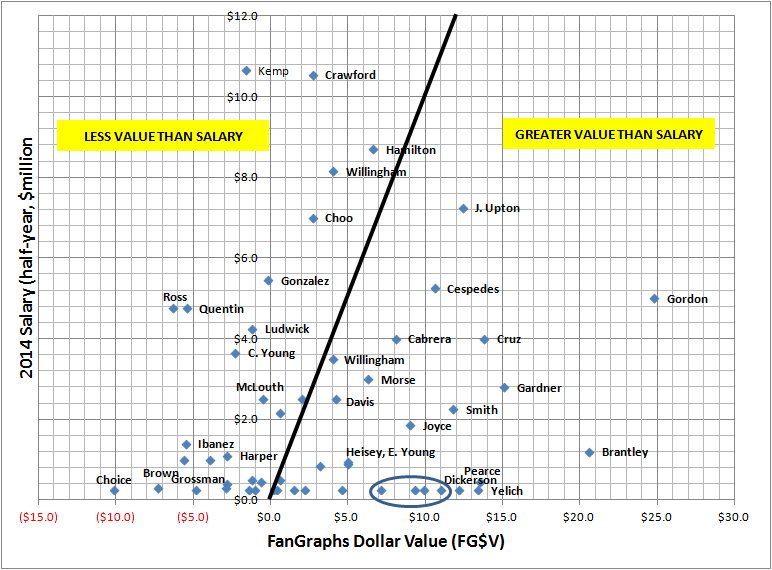 The horizontal axis is the FanGraphs Dollar Value (FG$V), an estimate of the player's production so far this year and is basically a multiple of his fWAR. The vertical axis is one-half of their 2014 salary, reflecting just over half the season has been played. All data is through Friday, July 11th, and updated data from FanGraphs can be viewed here. The dark line is the boundary between players outperforming their contracts (the right side) and underperformance (the left side), and the greater the perpendicular distance from the line, the better or worse the performance.

When Alex Gordon came up in 2007 he was supposed to be the next big thing, the combination of power, hitting, speed who would lift the Royals back to the glory days of yore -- the second coming of George Brett. He struggled at third base and was on the verge of becoming the next in a long line of phenom busts when he was switched to left field and quickly began to fulfill his expected promise. He's a plus in batting, fielding and base running and among the league leaders in assists and in holding base runners.

Spend some time reviewing the last link and interesting numbers on number of balls hit to left field begin to emerge and demonstrate the potential benefit of putting someone out there who can actually field. Couple that with the decreased number of runs scored and the value of run prevention takes center stage. According to FanGraphs Gordon is the best-fielding player in all of baseballl -- he took his time, had to switch positions, but is finally living up to the hype.

Michael Brantley is turning into an All Star

Michael Brantley is turning into an All Star

In my post on shortstops I mentioned how Troy Tulowitzki is an outlier, and Gordon would have been a similar outlier were it not been for the production of Michael Brantley. He's always been a decent player but increased his power this year, already topping his previous high in home runs. His batting average and OBP are significantly higher and his K/BB ratio is right at 1, very good for someone with some pop in his bat. He's second in assists but only so-so at holding runners, but if he maintains a .900+ OPS, that will be a minor point.

I've never really understood Brett Gardner, mainly because I could never tell what the Yankees were doing with him -- was he going to play left or center, be a leadoff hitter, a base stealer, and most importantly, why did someone with no power strike out so much? Then again, I gave up trying to understand the Yankees years ago as they continue to trot  out an old, expensive and underwhelming lineup in an era that left that strategy in the dust. I like Jacoby Ellsbury as much as the next guy but wonder if the Yankees would have been better off leaving Gardner in center and allocating that money elsewhere.

Beyond the Box Score managing editor Bryan Grosnick had the BtBS writing staff vote for All Star starters and instructed us that "No one" or "Do I have to pick someone?" was not an acceptable choice for National League left field. Thus forced, I think I eventually selected Seth Smith. He's really not a bad choice (I may have chosen Corey Dickerson, it's in the spreadsheet in the accompanying article), and the Padres have enough problems that I strongly suggest left field not be one of them. He has 10 home runs, not bad when playing half his games in Petco Park but only 27 RBI. I freely admit I find the RBI almost as useless a stat as pitching wins (almost) because they're a function of opportunity -- a hitter can only drive in a runner on base, and the Padres haven't exactly been stacking the bases in front of Smith. They're dead last in runners on base by over 200, which is a huge gulf, but despite that, Smith isn't driving in runners when they're on. I just realized I'm fiddling while the Rome that is San Diego burns.

Does the Cuban constitution prohibit players born in their country from taking a walk?

Yoenis Cespedes' power numbers are on track to be right where they've always been since joining the A's, and his average is settling into the .250 range. His walks are actually increasing, but so are the strikeouts as he's on a pace to set a new season high around 150. His outstanding throws (here and here) are well-known, but lost in the dim haze of the passing days is that both were the result of misplayed balls.

Steven Pearce, Corey Dickerson and Christian Yelich are all labeled, and circled next to them are players who are almost as effective in J.D. Martinez, Starling Marte, Scott Van Slyke and Khris Davis. They're all young, cheap and delivering good value. Martinez in particular is packing a punch in around 200 plate appearances that could translate into a 30 HR/120 RBI season. Pearce is turning Nelson Cruz into a DH, a fairly expensive one to be sure, but one who is clearly an upgrade to what they were using before.

Scott Van Slyke is creating serious issues in an already-crowded Dodger outfield. With Yasiel Puig likely ensconced in right for the next fifteen years, there are two spots for Andre Ethier, Carl Crawford, Matt Kemp and Van Slyke. Crawford and Kemp are on the wrong side of the scatter plot graph, but that's okay since they're only owed over $125 million collectively through 2017, with Kemp due another $43 million through 2019. At 27 Van Slyke needs to prove if he's a real player or not. He's played more games at left than any other position but is being used at center more in the past month or so, so it's probably still in flux. The Dodgers are one of the few teams that can afford to throw money around like this, but even they will have to conclude that someone has to go in this situation. Unfortunately, none of these players would return much in a trade.

Bryce Harper has been injured this season and will probably play himself onto the correct side of the graph as he returns to form. I was very surprised to see Carlos Gonzalez on the underperforming side as he's been one of the better left fielders for the last four years or so. Even before being sidelined by injury around a month ago his average and power production were down resulting in a precipitous 200-point drop in OPS. He just returned, so it remains to be seen if he can return to his former production.

At this point last year Domonic Brown was the toast of baseball with 23 home runs and poised at age 25 to enter his productive years. Age 26 hasn't been so kind to him as his power has left him, his average is in free-fall and he's second-to-last in fielding value. Lucky for the Phillies they're going nowhere soon, so they have time to see if 2013 Brown returns or if 2014 Brown is the real Brown -- and on his way out of town.

If Brown is the second-worst fielder, who's the worst? Michael Choice of the Rangers, who coupled Lead Glove fielding with Tin Slugger hitting. I read a post stating "The Texas Rangers surprise (sic) everybody today by sending Michael Choice down to the minors," which clearly contains a typo in that "everybody" obviously should have been "nobody." There's a place for .177 hitters who can't field -- the Pacific Coast League, which is where Choice is now.

Of the 19 left fielders with an fWAR of 1.0 or greater, 13 are rated as negative fielders, no real surprise in a position that still places offensive production over defensive ability. It probably won't change much going forward and left field will continue to provide a home for the fielding-challenged like Yoenis Cespedes (who's actually above water) and fielding-optional like Matt Holliday, Melky Cabrera and Nelson Cruz. As the newer ball parks added more seats at the expense of foul territory and consequently decreased the amount of fair territory a left fielder needs to cover, the modern left fielder needs to be able to make a relay throw and hit 25-30 home runs. Okay, 15-20 -- much beyond that is considered a bonus.