Starlin Castro: Pulling himself back together

Starlin Castro was just named to his third All-Star team. What has he done to get back on track after a miserable 2013?

Share All sharing options for: Starlin Castro: Pulling himself back together

Let's take a trip down memory lane. About a year and a half ago, Starlin Castro posted back to back 3.1 fWAR seasons and earned himself two All Star nominations at the young age of twenty-three. Despite falling below a 100 wRC+ in 2012, optimism remained high due to his combination of youth, talent, and potential. Then 2013 reared its ugly head and Castro was a disaster, posting offensive lows across the board and in the process, going from being considered one the brightest young stars in the game to a replacement level player, at best.

The culprit behind his downfall can be attributed to his erosion of plate discipline. Since coming into the league, his BB/K ratio had fallen each year. To make matters worse, his lack of discipline was also affecting his ability to make contact:

Sometimes, this sort of decline can be acceptable if there is a tradeoff for power, but this was not one of those cases. Castro never has been, and likely will never be a power hitter, primarily because he lacks opposite field power. 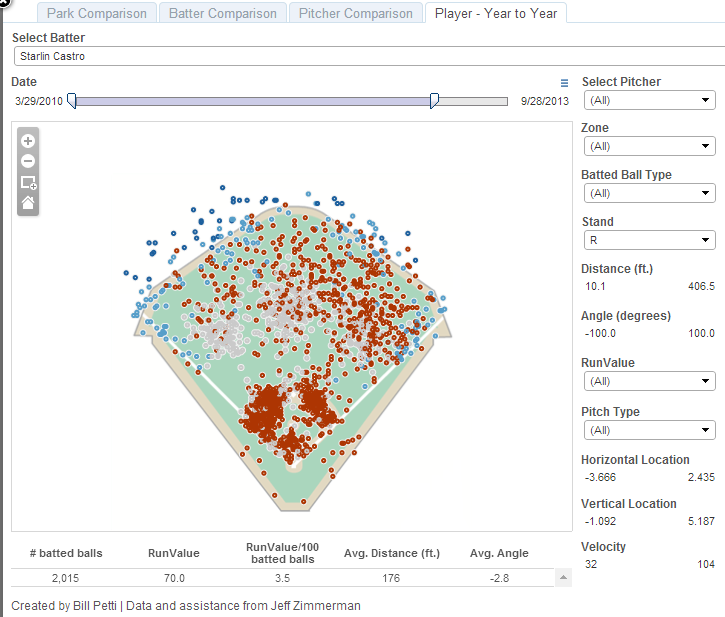 As alluded to before, you can see right field has been a black hole throughout Castro's career. If Castro had kept this trend up it seemed he was destined for mediocrity; however, Castro has made adjustments. To begin, let's take a look at his swing percentages trends:

As we can see, Castro tightened up his strike zone by laying off pitches out of the zone. This is also reflected in his O-Swing%, which is down about 2% compared to last year, while remaining steady with pitches within the zone (only a negligible .3% decrease). As you can imagine and no doubt have noticed by now, this has also allowed Castro to hone in on pitches within the zone, specifically pitches on the inner-half, typically a wheelhouse for hitters. By doing this, Castro has begun to pull the ball with greater frequency, reversing a two year skid. 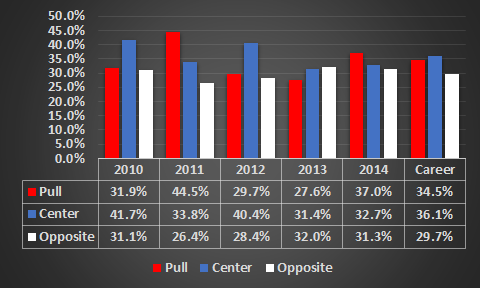 What does all this mean? There is evidence to suggest Castro has improved his plate discipline, not only through walking more and striking out less. This is true, but more importantly, by cutting out the clutter, Castro has focused in on an area of strength, pulling the ball. In doing so, he has pulled himself out of the rut he fell into last year and back to being an above average hitter.

Being in the league since 2010, it's easy to forget Starlin Castro is only twenty-four years old. Adversity with young players is to be expected, even after being in the league for a while. Some players don't make their Major League debut till way after twenty-four, if even that. The fact that Castro was called up at such a young age and stuck around as long, speaks to the ability his possess. He is a talented hitter who fell on hard times last year, yet through this adversity he made adjustments to his game, he might not otherwise have done. Given his young age, talent, and the adjustments made, Castro's future looks to be back on track, and bright as ever.

All statistics and info courtesy of FanGraphs.