Miguel Cabrera isn't a great defensive third baseman, but he isn't terrible either. What can we learn about his defense from the Inside Edge data?

Share All sharing options for: Using Inside Edge data to evaluate Miguel Cabrera

Scott Lindholm's recent piece on valuable third basemen made me miss the Miguel Cabrera experiment. When the Tigers first announced they would move Cabrera to third after acquiring Prince Fielder before the 2013 season, the baseball world was not optimistic. Everyone from The Fielding Bible's John Dewan to Harold Reynolds objected.

This year, Fielder has been traded to the Rangers and Cabrera is back at first base after two years mostly spent in the hot corner. Was he better than average at the hot corner? Objectively, no: of all players with at least 900 innings at third, Cabrera posted two of the worst 25 defensive seasons since 2002 according to Mitchel Lichtman's Ultimate Zone Rating (UZR).

But he also wasn't the embarrassment to baseball everyone expected, either. Look at that table again: in 2013, Cabrera was only a fraction of a run worse than David Freese, and in 2012, Cabrera finished just behind Chris Johnson and Pedro Alvarez. And it goes without saying that none of his peers made up for their fielding at the plate the way Cabrera did.

My ultimate point is simple -- defense is important, and even if we assume that Cabrera's range prevented him from getting to twice as many balls as he actually fielded (which is ridiculous), he still had many more opportunities to make positive contributions with his bat, and this is the same for other third basemen as well.

What is (or was) Miguel Cabrera's range? How many grounders sneaked past Cabrera that the average third basemen would have turned into 5-3 putouts? There are a number of tools available to help us explore answer that question, but among the most intuitive is the Inside Edge data available via FanGraphs. For each batted ball, the Inside Edge scouts judge the probability that an average fielder at that position could have made a play, grouping plays into bins from "impossible" (0% probability) and "remote" (1-10%) to "almost certain" (90-100%). With their interactive spray charts, we can count the number of balls that came Cabrera's way, and what they became.

If we wanted to, we could assign runs to each event using linear weights, and then weight those based on the probability group, so that the "almost certain" out Cabrera turned into a double counted for more runs than the "remote" outs he couldn't convert. This is very similar to the theory behind UZR, though to my knowledge UZR doesn't penalize fielders more for giving up extra base hits. 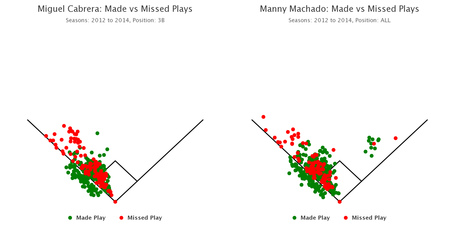 To no one's surprise, the converted shortstop converts more balls to outs than the converted first baseman. Even if we ignore the few plays Machado made while shifted into short right field, we observe more balls getting past Cabrera into the outfield, and a wider area of Machado's infield covered by green. We could use this information to find the actual area covered by Machado or Cabrera -- that is, the total area where more than half the balls hit to them are turned into outs. This Baseball Info Solutions graphic acts as an example, showing the area covered by Peter Bourjos on fly balls.

Once we know the ranges covered by individuals, we can get a sense of how well teammates cooperate -- and how much ground they leave uncovered. Here is an example graphic, with the spray chart for Cabrera superimposed over that of former teammate Jhonny Peralta. 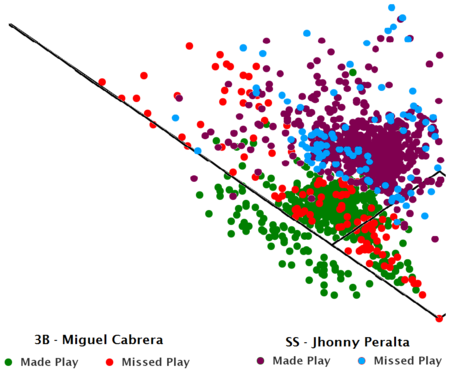 For comparison's sake, we can compare that pairing with the naïve combining of Cabrera's range with that of Brandon Crawford, who gets high marks from Inside Edge on difficult plays. Comparing these two graphics, we see Crawford has a slightly larger range to his right, but a much larger range to his left, getting to more balls in the area around second base. 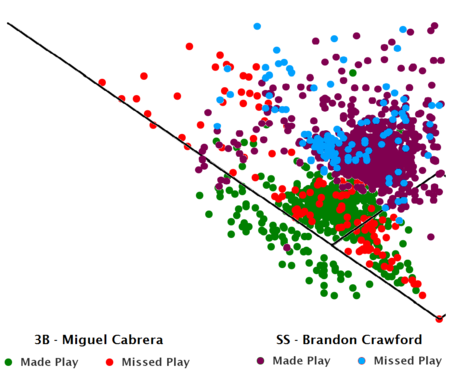 Even at this most basic level, we understand why Detroit was so excited by the arrival of Jose Iglesias at the trade deadline last year: Iglesias not only represented a defensive upgrade over the Tigers' current shortstops, but his great range would also offset Cabrera's reduced range.

Of course we can also select a defensive downgrade. Let's superimpose Derek Jeter's range on top of Cabrera's. The difference between Jeter's range and the other shortstops is most noticeable on popups, especially those behind third base. And (at least at this level) the Inside Edge data don't account for fielders' starting position before the ball is hit. If, for example, Peralta starts every play a few steps closer to third base than Jeter, then replacing Peralta with Jeter would probably have resulted in more grounders getting through up the middle. 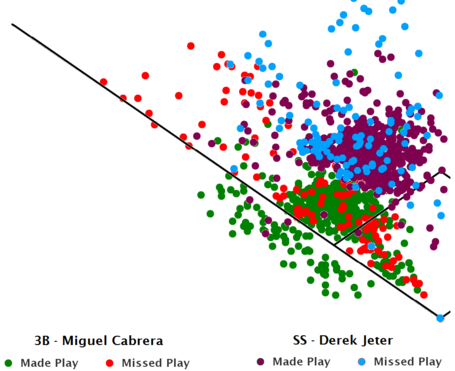 But starting position isn't the only aspect missing from these spray charts. The type of batted ball -- grounder, popup, or line drive -- was certainly used to assign probabilities to each fielding chance but is not available through FanGraphs. This limits what we can learn about the range of players, especially for outfielders. And although the Inside Edge trackers are consistent with their rankings, using human observers to produce subjective rankings can always produce disagreements, even between experts.

Some of these can eventually be corrected by MLBAM's StatCast system, which can be used to objectively measure how likely a given fielder can get to a certain batted ball from a certain starting position. On the other hand, since the number of balls hit at a fielder won't change, sample size issues will still keep us from developing stable, dependable defensive metrics, even with all this additional information.

All statistics courtesy of FanGraphs and Inside Edge. Special thanks to Ashley MacLure for her help creating the superimposed spray charts.

Bryan Cole is a featured writer for Beyond the Box Score and a recovering third baseman. You can follow him on Twitter at @Doctor_Bryan.