What if LeBron James was a baseball player?

Okay, okay, so you've heard enough about LeBron James, and don't need to hear more about him on a baseball site. But this is sort of neat. What if LeBron was a baseball player? He would be Mike Trout times two.

Share All sharing options for: What if LeBron James was a baseball player?

So you’ve managed to escape the looping sports networks and local sports pages to find safety at Beyond the Box Score. *Refeshing sigh.* The one place where you don’t have to worry about hearing more on LeBron James and where he will end up playing next season. Well, almost. Even the baseball nerds have a take on this one.

Welp, I guess this is outdated.

Welp, I guess this is outdated.

Thinking about LeBron James and the monumental impact he has wherever he decides to take his talents to play, it made me wonder what the equivalent would look like in baseball. Obviously, basketball and baseball are very different sports. The object – score more than your opponent – is the same, but pretty much everything else is different. Baseball is mostly an individual sport, with a collection of those individual events making a team. Basketball is extremely team-oriented. And perhaps the biggest difference is that a basketball player can impact almost every play, whereas in baseball, each player contributes a small percentage of plays through their at-bats and defensive plays.

Understanding there are differences, we are not so much concerned with the game of baseball versus basketball as much as we are interested in how a star player impacts a team’s chances of winning. In other words, how valuable is LeBron James to a team versus, say, a Mike Trout?

Like baseball, there is a way to calculate win shares for basketball players, although far less peer reviewed. Basketball-Reference created a win share system based on the Bill James model for baseball. Win shares are broken up in offensive and defensive values. Follow this link to read the detailed calculations.

In the end, by adding offensive and defensive win shares together, you can find the total win share value for any particular player. If you add all of the win shares of each player on a particular team, the total should closely resemble the team win total for that given season.

Which brings us back to LeBron James. We can use win shares to get an idea of how much of an impact he has on his team’s winning percentage. Remember, unlike baseball, the basketball season is only 82 games. So we need to adjust win shares to team wins. 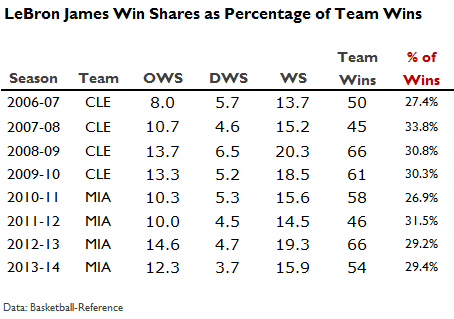 By looking at LeBron’s final four seasons in Cleveland and his previous four seasons in Miami, we can compare his impact across the same number of seasons on each team. It is clear to see that his win share total in each season accounts for roughly 30% of his team’s wins. He had a greater impact in Cleveland, which makes sense considering the talent differences between there and Miami.

So, if LeBron is accounting for roughly 30% of his team's wins based on win shares, what would be the equivalent in baseball?

The most obvious way to measure win contribution in baseball is WAR. Although, we can’t compare LeBron’s win share total to WAR directly because they measure two different things. Remember, WAR is wins above replacement, so it assumes a baseline of about 43 wins for a team of replacement level players. Therefore, in calculating the impact of a baseball player on his team's success, we will subtract 43 wins from the team’s win total each season.

If we are going to compare LeBron James to a baseball player, why not Mike Trout. Below is Trout's fWAR totals and percentage relative to team wins, accounting for the 43 replacement level wins each season. 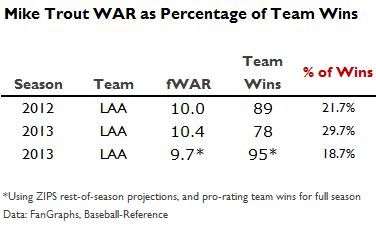 We can see that Trout undoubtedly has a major impact on the Angels. Since he has performed at an extremely high level in each of the past three seasons (pro-rating this season), regardless of the Angels overall record, Trout adds roughly ten wins above replacement, or between 18- 30% of the above-replacement wins up for grabs (i.e. 10/(89-43) = 21.7%).

Note: There was some thought to changing the win shares used to calculate LeBron's impact on his team in terms of "wins above average" so that it more closely resembled the idea behind WAR. Since we are comparing LeBron's impact as a basketball player to Trout's impact as a baseball player, we are less interested in how much above average LeBron is to his peers. We are instead interested in how many wins each contributes to their respective teams, understanding that in basketball, each player has a larger impact due to the fact that they participate in a greater share of the plays.

The key is the "up for grabs" number. For Trout, his individual performance can be great, and the team can still lose. He only comes to the plate about four times per game and may only see three or four balls defensively. There are eight other players who get an equal share at the plate and in the field. And we haven't even talked about the most important influence on winning in baseball, and that is pitching. In basketball, a player like LeBron James can single-handedly win a game for his team. He can take 25 - 30% of his team's shots in a given game, set-up a great percentage of the other shots, and contribute defensively every play, thus his performance has a greater impact on wins and losses.

So when we look at the win share percentage of LeBron, we have to keep in mind that while his win share total may stay about the same regardless of the team he is on, his team win total is likely to always be very high. Mike Trout's fWAR can remain around ten - which is astronomical in baseball terms - but his team win total is more likely to fluctuate based on the talent around him.

To be fair in comparing LeBron to Mike Trout, we would have to do so using the same winning percentage of their respective teams. If LeBron James played on a good basketball team that won 60% of its games, or 49 wins per season, using his win share total since 2006-07 (133 WS), that would equate into 33.9% of the team's wins. Doing the same for Mike Trout, using a 60% team winning percentage, or 97 wins per season, his WAR, taking into account replacement level wins, would equate into 18.6% of the team's wins. LeBron almost doubles Trout!

What this comparison shows us is that all of the craziness surrounding LeBron James is justified. On a 97-win baseball team, a player would need a fWAR close to 18 to account for the same win share percentage to win total as LeBron has averaged since 2006-07. For those of us who think in baseball terms, it would be like Mike Trout doubling himself, declaring for free agency, and having both him and his clone sign on the same team.