Due to the large amount of axial and torsional force put upon the hip joint in the act of pitching, the femoroacetabular (hip) impingement injury sustained by Josh Beckett is not an uncommon one.

In a year already full of highs and lows, Josh Beckett has suffered another debilitating injury—this time, a left hip impingement—putting a halt to a bounce back 2014 season that has already seen the right-hander hurl a no-hitter after working back from a thumb injury in spring training and thoracic outlet syndrome last season, which required a season-ending surgical procedure. Enjoying a 2.26 ERA/3.83 FIP/3.57 xFIP pitching slash line in 103.2 innings, Beckett has served admirably this season as a reliable back of the rotation starter, giving the Dodgers additional starting pitching firepower beyond the front end triumvirate of Clayton Kershaw, Zack Greinke, and Hyun-Jin Ryu.

A femoroacetabular impingement (FAI) is a condition that arises from irregular morphology of the bones of the hip, with the head of the femur and the acetabulum of the pelvis failing to form a smooth, cohesive ball and socket joint, creating an interrupted range of motion of the joint. These irregularities arise from the formation of bone spurs around the femoral head and/or the acetabulum, causing these bones to rub and catch against each other, rather than moving smoothly. Over time, this can result in the tearing of the labrum—cartilage that rings the acetabulum—and also breakdown of the articular cartilage that covers the femoral head, potentially leading to osteoarthritis.

There are two (but actually, three) types of FAI deformities, visual examples of which can be found here:

Pincer. An over-coverage of the of the femoral head by the acetabulum either at a focal point or globally, pincer injuries occur when extra bone extends out over the normal rim of the acetabulum.

Combined. Pincer and cam mechanisms are both present.

In a cam deformity, the location of the deformity can arise from a particular movement of the hip. Anterior deformities can arise from internal rotation in 30 to 60 degrees of flexion, which can be seen in the wind up portion of a pitcher's delivery, as the lead leg—for Beckett and other righties, his left leg—moves through open-chain adduction-internal rotation to abduction-external rotation through an arc of flexion. When the deformity is located superiorly, hip abduction can often be the culprit, with posterior impingement occurring with external rotation of the hip in extension, which can bee seen as the pitcher begins his stride towards the plate. Anterior and superior impingements can also be seen in a pitcher's follow-through, as body weight is moved onto the lead leg with concurrent flexion, internal rotation, and adduction.

This injury can often result in shorter stride lengths, leading to poor command of pitches (leaving pitches up in the strike zone) as well as increased stresses put upon the shoulder joint during deceleration and follow-through arising from the alterations in hip mechanics and stride length. Hip pain and concomitant reduced range of motion can also lead to a more pronounced 'crossfire' delivery, where the pitcher is pitching across his body. This can lead to changes and inconsistencies in release point, affecting command and control, with more pitches ending up on the glove side and off of the plate, as the hips and lower body in general are prevented from clearing completely before the arm is accelerated towards the plate.

Looking at Beckett's June and July starts—Beckett had mentioned that the hip issues had been developing in more recent starts, with his two July outings being the most troublesome—we do see some very subtle inconsistencies in his release point, especially in the vertical component, in his two most recent starts (bottom two grids), where see his arm dropping as pitch counts increase and innings progress: 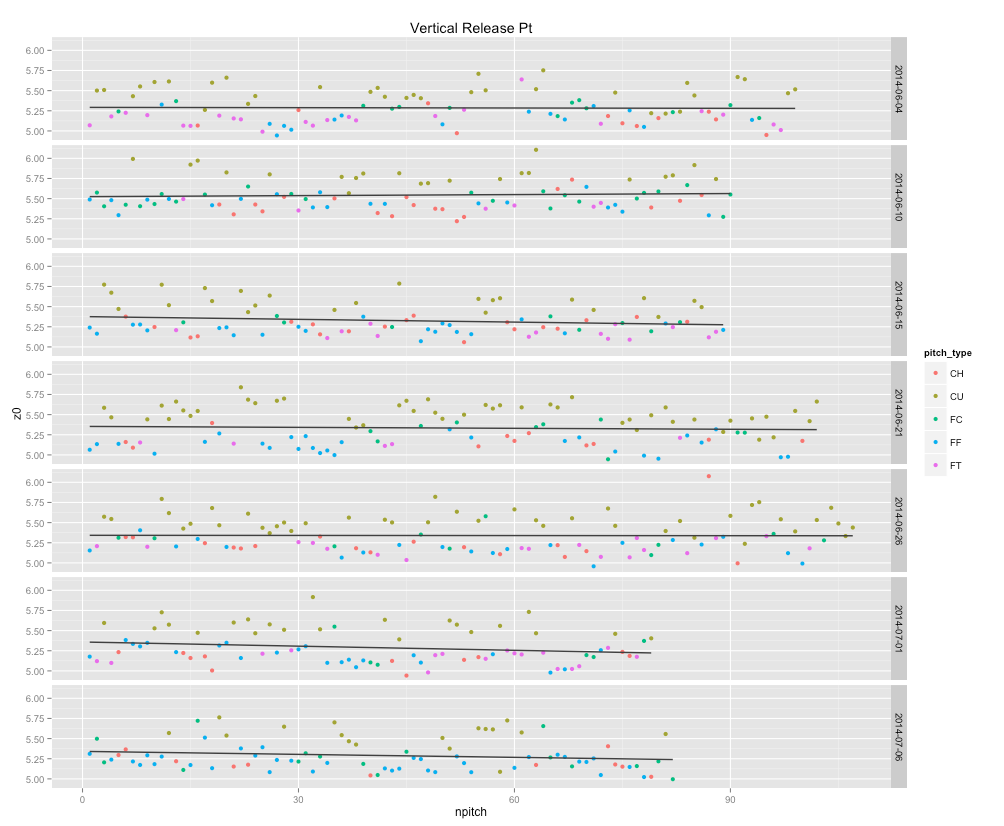 Similarly, we find subtle differences in Beckett's command as he has battled the hip impingement, missing glove side and up in the zone a little more frequently in his July starts: 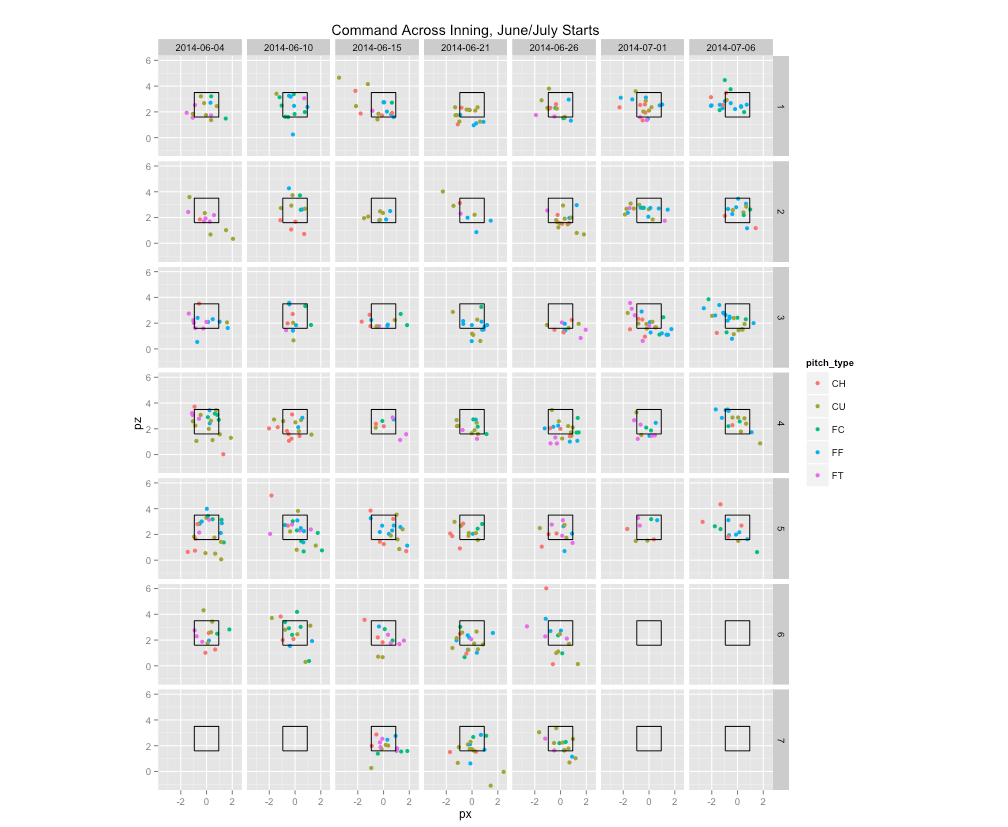 Impingement woes can also be exacerbated by a pitcher's particular mechanics, with extensive wind-ups and leg kicks putting a player at additional risk of the injury, moving the hip in excessive amounts of abduction, internal rotation, and flexion as they lift their leg to maximal height at their balance point.

Symptoms are not limited to pitching, with Beckett himself noting the discomfort was most prevalent while running the bases in his last start. In lateral running, superior impingements can occur. As the hip abducts, increased forces on the socket are created, with increased contact of the superior femoral head-neck junction with the superior aspect of the acetabulum occurring; the trailing leg is alo under increased compressive and shearing forces due to the angle and range of motion of the leg at near maximal levels. Taking in account Beckett's impingement being in the left hip, this phenomenon would be most prominent at first base, moving towards second base on a batted ball, as this would put his left leg as trail leg.

The overhead athlete, especially pitchers, are at increased risk of hip injuries such as FAI, due to the mechanics associated with the throwing. Assuming a mild case, the treatment of FAI—anti-inflammatory medication, rest, and physical therapy—should put Beckett back on the mound soon, barring any unforeseen surprises found on imaging studies that might complicate the diagnosis and course of treatment; arthroscopic procedures can be indicated in more serious cases of FAI. While it can often lead to more substantial injuries such as a tear of the labrum, it appears Beckett and the Dodgers dodged a bullet with the less complicated FAI diagnosis. Changes in habits and activity can also be indicated for an impingement injury; for Beckett, that could possibly mean a slight tweak in his wind-up mechanics in order to put less stress on the hip as he kicks and twists in preparation for releasing a pitch.