The Seattle righty has taken his game to the next level in 2014, behind modifications to his pitch selection motivated by shifted preferences. But can he improve further?

The Mariners have played pretty well this season. At some point, we'll have to come to grips with this. They currently have a 49-41 record; while that only puts them at third place in the AL West, it does give them a 46.7% chance of making the playoffs, fifth-best in the league. This club is pretty good, and something — or someone — has caused it. But what?

That Felix Hernandez guy has done that thing that he does — you know, where he paces the AL in both RA9-WAR and FIP-WAR. Spitting in the face of his homer-hating ballpark, Kyle Seager has ridden a power outburst (and surprisingly solid defense) to stardom. Robinson Cano has, for now, lived up to the expectations of the $240 million deal he signed in December. With all of that said, though, one player in particular has played a large, yet unsung, role in Seattle's resurrection: Hisashi Iwakuma.

When the M's inked Iwakuma to a one-year, $1.5 million contract in January of 2012, they probably didn't expect a whole ton (as the low salary might imply). After all, he had missed two months of the Nippon season with a shoulder injury, which had had an adverse effect on his velocity, and he would turn 31 in April. He quelled those concerns by submitting a respectable, albeit lucky, rookie campaign (3.16 ERA, 3.76 xFIP, 3.85 SIERA), convincing the Mariners to re-up him for two years and $14 million. 2013 was another story, as Iwakuma, while still lucky, showed vast improvement: Pitching his way to a 2.66 ERA to go along with a 3.28 xFIP and a 3.33 SIERA, he finished the year as the third-best pitcher in the league (well, according to Cy Young voters).

At first glance, one might think that Iwakuma has regressed in 2014. After all, his 3.07 ERA seems to represent a significant dropoff from last year. However, 'round these parts, we look at them there peripherals, which illustrate that fortune has turned against him thus far. Take a look at his ERA, FIP, xFIP, and SIERA, and their corresponding ranks among pitchers with 80 innings (of whom there are 112):

In his third year in the states, Iwakuma has pitched better than ever, although the results don't show it. So what has driven this progress? Not strikeouts, for his K% is analogous to last year's (21.1%, as opposed to 21.4%); moreover, it may decline as time goes on: Mike Podhorzer's xK% equation pins it at a more average 19.1%.

Robinson Cano and the Mariners after 70 games

If this is the "new" Robinson Cano, how does it alter the Mariners' investment?

Robinson Cano and the Mariners after 70 games

Two things have led to Iwakuma's leap: walks and ground balls. Never a wild pitcher, Iwakuma has dramatically bettered his command in 2014, with an infinitesimal 2.4% walk rate that comes in at second-best in that 112-man sample. Plus, Podhorzer's xBB% equation thinks Iwakuma's walk rate should be 2.7% — not much different from his actual mark. As for grounders, his 54.1% GB% puts him just outside the top ten in all of baseball.

Let's dig into pitch data to investigate these numbers. Iwakuma has four primary pitches: a four-seam fastball, a splitter, a sinker, and a slider*. If we examine his career as a whole, we find that he has begun to phase out the former in favor of the latter three: 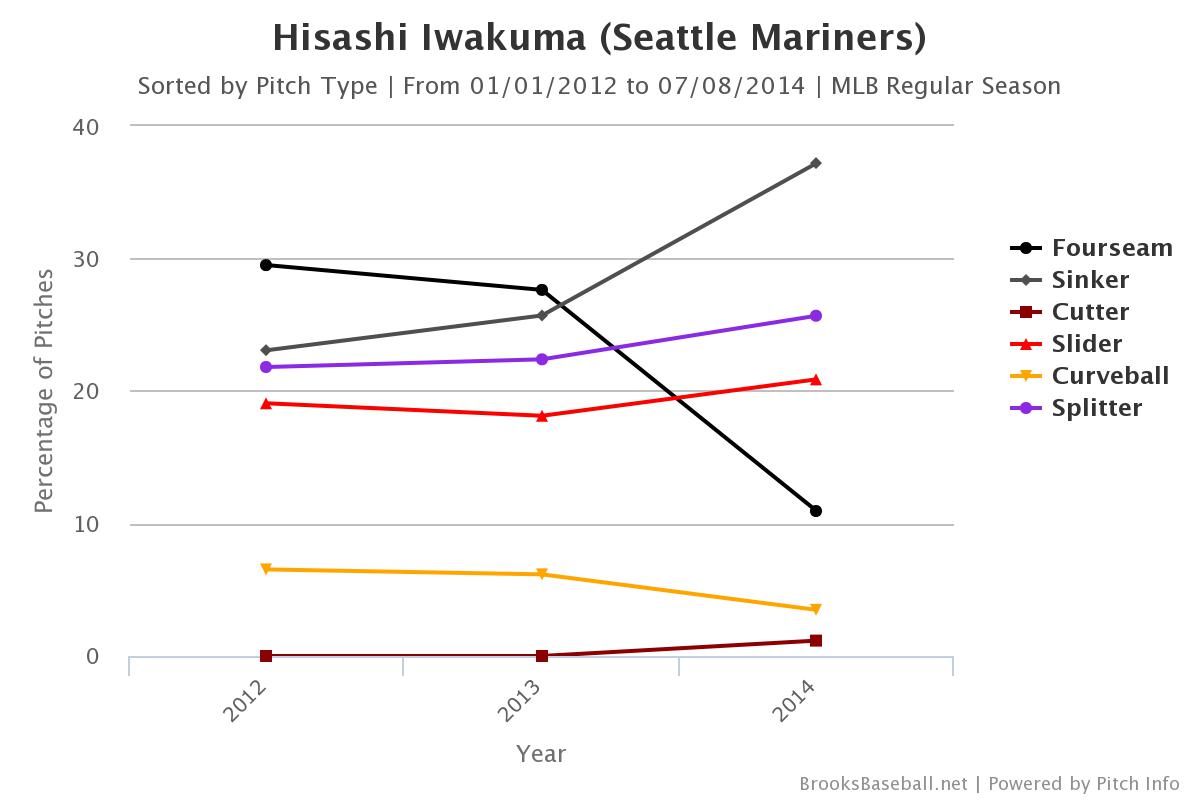 *Tidbit: By FanGraphs' data (which differs from Brooks's), Iwakuma has thrown each of these at least 20% of the time in 2014. No other pitcher with at least 80 innings in a season has ever done that. Of course, Iwakuma probably won't either, but whatever.

None of these pitches has seen a decline in velocity from last year; instead, the arsenal alteration is probably due to a change in priorities. Allow these graphs to explain: 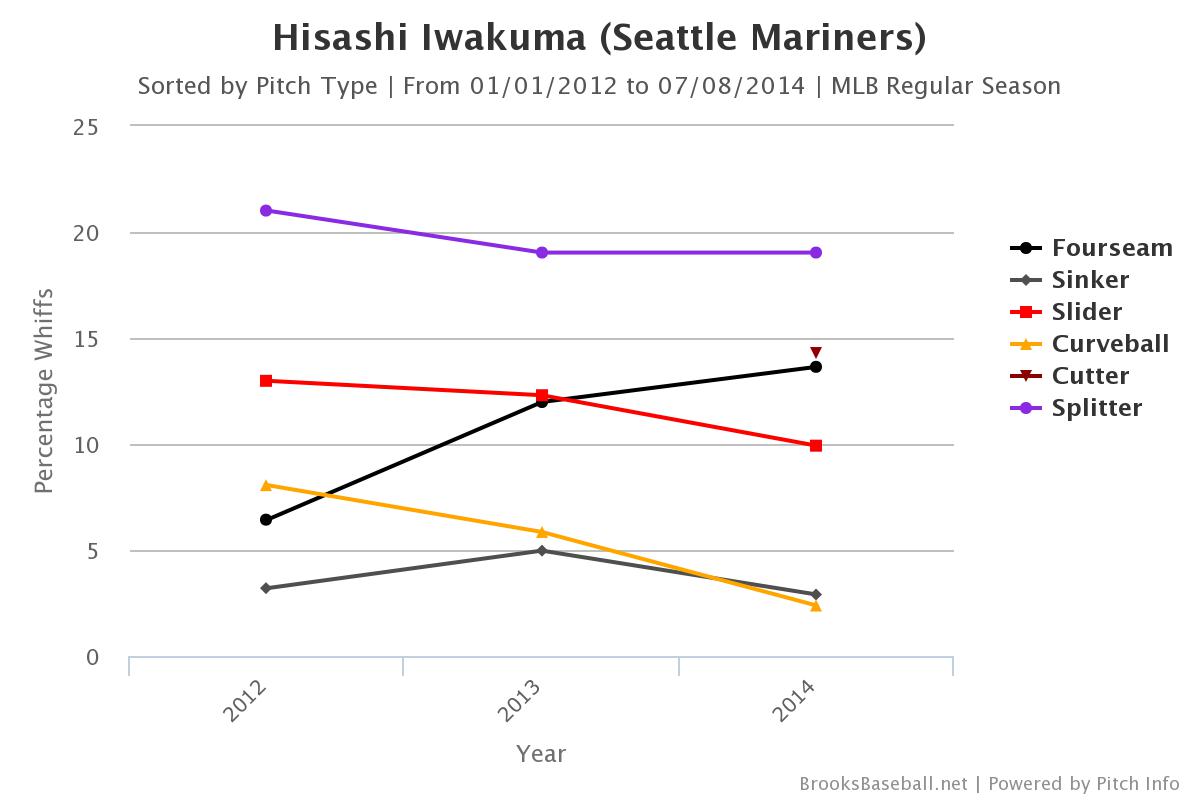 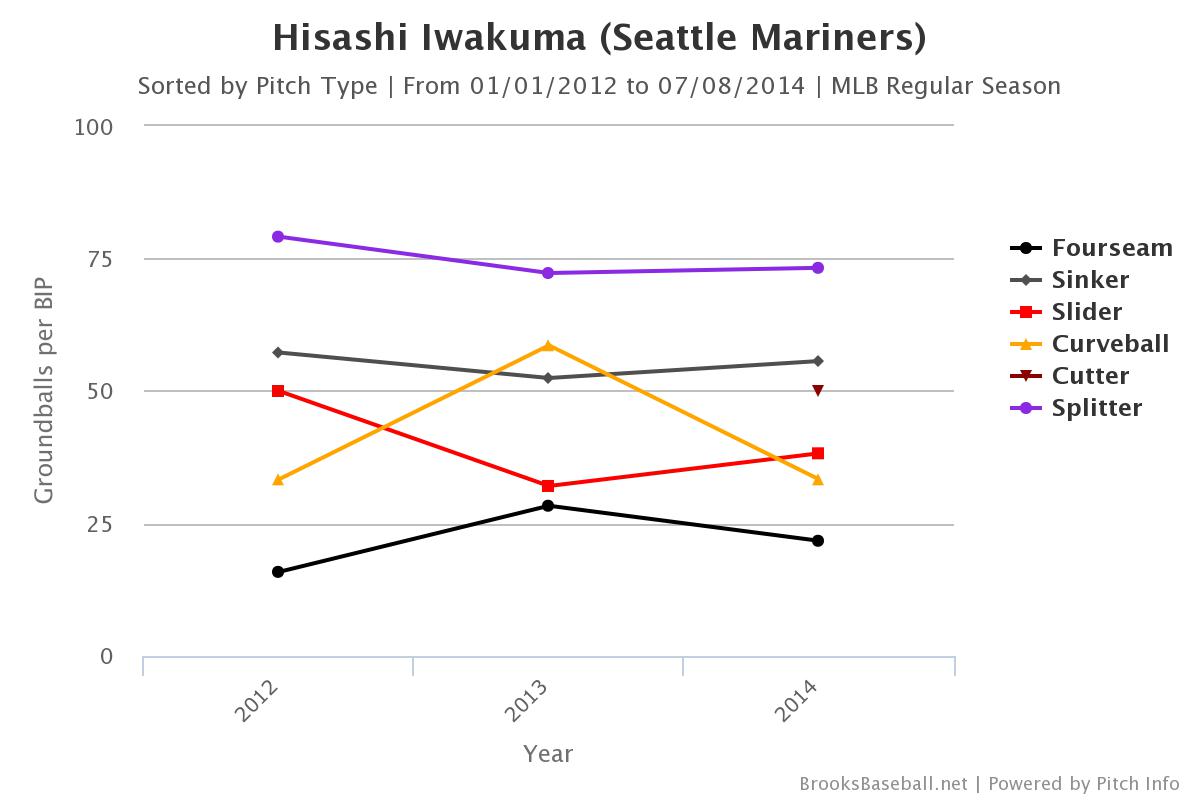 While it has always generated a good amount of whiffs, Iwakuma's four-seamer has never elicited many worm burners, of which he has collected many in the current season. By contrast, his sinker has always been earth-inclined (as most sinkers are), although that comes at the expense of swings-and-misses. It seems that in order to become elite, he sacrificed punch-outs for groundouts; based on his aforementioned astounding peripherals, I'd say this decision has paid off.

But what if he could be even better? Yeah, Iwakuma's SIERA ranks eighth, but that means seven men have out-pitched him. And when we look at those two graphs, we see that one pitch leads the way for both SwStr% and GB%: the splitter.

My colleague Jeff Long has deemed Tanaka's splitter the best in MLB, but Iwakuma's has been arguably as superb. And yet, despite its undeniable awesomeness, Iwakuma has repeatedly eschewed the splitter in favor of the inferior sinker. While the former may have derived its efficacy from its sparse usage, a slight uptick could probably only help. His transformation has worked well, as his ground balls and paucity of walks have more than compensated for his (theoretically) lower strikeouts, but he could have the best of both worlds.

Not many people saw the Mariners coming this year, just as not many people saw Iwakuma coming this year. If the M's want to continue defying expectations, they'll need their #2 starter to maintain his breakout. If Iwakuma wants to continue defying expectations, he'll need to implement that otherworldly splitter more often. Then the Mariners wouldn't need to acquire Tanaka himself, since they'd have a more-than-adequate substitute.

All data courtesy of FanGraphs, Brooks Baseball, Baseball-Reference, and Baseball Prospectus, as of Wednesday, July 9th, 2014.