Continuing a series in which every position is reviewed. This post reviews shortstop.

There are times when mere words don't convey a person's performance. This definition is from dictionary.com:

outlier [out-lahy-er] noun
1. something that lies outside the main body or group that it is a part of.
2. someone who stands apart from others of his or her group, as by differing actions, beliefs, religious practices, etc.
3. Statistics.
a. an observation that is well outside of the expected range of values in a study or experiment, and which is often discarded from the data set. (emphasis added)

This is the scatter plot graph for shortstops: 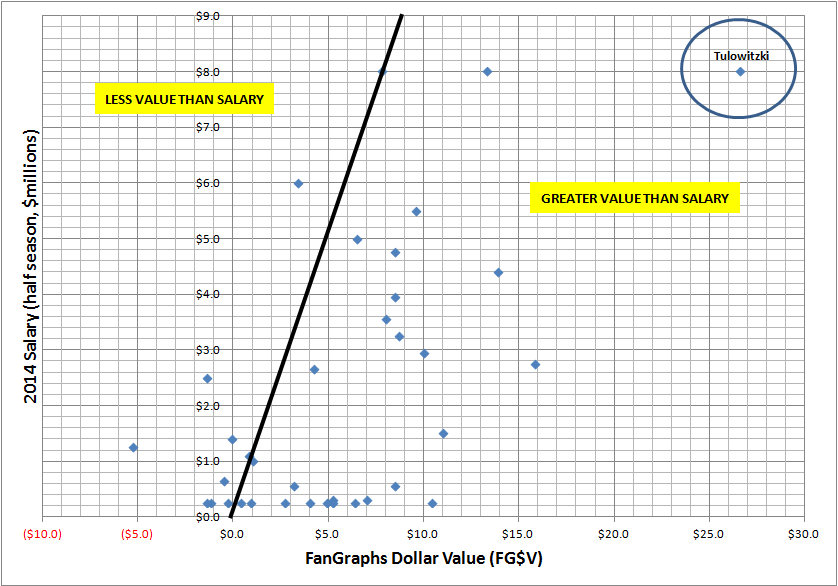 This is the same type of chart I've been using in my positional reviews where the horizontal axis is the FanGraphs dollar value (FG$V) estimate of the production the player has provided so far in 2014. The vertical axis is half their 2014 salary, to reflect that a little over half of the season has been played. This data is through Monday, July 7th, and up-to-date data can be viewed here. Tulowitzki has delivered around $27 million in value so far this year, and the next-best shortstop right at $16 million. Tulowitzki's performance extends the horizontal axis by fifty percent -- that is the very definition of outlier.
This is the graph that does not include Tulowitzki: 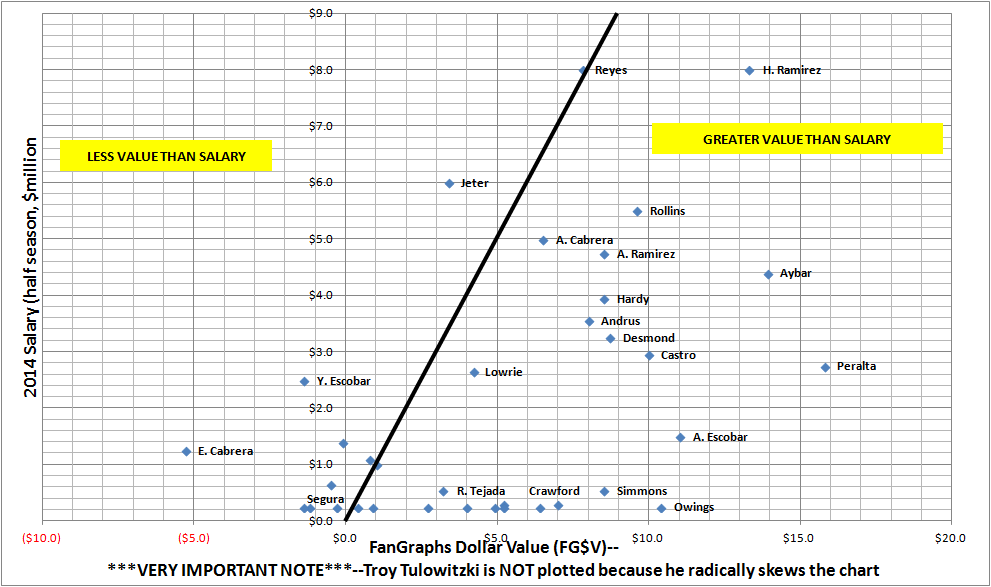 Baseball's best catchers
I'll return to Tulowitzki in a couple of weeks and put his season in historical context because there's too much to discuss regarding the other shortstops, and also because I discussed him at some length in this post. Until then, consider this a little taste of where Tulowitzki's season rates in baseball history for shortstops.
I can state with absolute assurance I would never have guessed that the #2 shortstop at this point would be Jhonny Peralta. It's no knock against him, he's had a very solid career and was having a very good 2013 until his 50-game suspension ended his season and caused the Tigers to trade for Jose Iglesias. He signed for four years and $53 million with the Cardinals, not ridiculous money but also perhaps on the high side for someone on the wrong side of 30. Clearly it hasn't been an issue this year -- he's already topped his 2013 home run total, but his batting average has regressed back to his career norm. His defense is good as any shortstop's this year, and if he can defy the normal aging curve that players face when they reach 33 (which he will in 2015), he can continue to produce for the Cardinals.

Baseball's best first basemen
I'll lump the Los Angeles shortstops together, Erick Aybar for the Angels and Hanley Ramirez for the Dodgers. They're both 30, and the similarities end there -- Ramirez hits for power and can take a walk, Aybar isn't very good at either, Ramirez had a stretch in 2011-2012 where he seemed to be a shell of his former self, Aybar has always been steady if unspectacular. Aybar plays excellent defense, Ramirez -- well, he's a really good hitter. They take separate paths in delivering value to their teams and are helping keep their teams near the top of their respective leagues. It's saying too much to state Aybar has been a catalyst for the Angels reaching the potential expected of them, but his play certainly has been a benefit.
All Cubs fans are aware of what Starlin Castro has done -- three very good seasons to begin his career followed by an extremely disappointing 2013 that left people scratching their heads. Who was the real Starlin Castro, the player in 2010-2012, maybe missing the power people had projected on him, or yet another Cubs prospect bust in the mold of Corey Patterson? That question still can't be answered definitively, but Castro is having an excellent season, already topping his 2013 totals for home runs and RBIs. He is what he is on defense and will never cause fans to confuse him with Ozzie Smith, but that was never a realistic comparison.

The burning question in Chicago is who will be playing shortstop in 2015, and itself suggests another question -- what returns the most value in a trade, demonstrated production or extreme upside potential? These questions are forced not only by the development of Javier Baez in the Cubs farm system but also by the acquisition of Addison Russell in the trade with the Athletics. With an alleged surplus of shortstop talent, what should the Cubs do?

Baseball's best second basemen
Baseball Prospectus released their most recent Top 50 prospect list (viewable only to BP subscribers, sorry), and they have Baez ranked as the #5 prospect and Russell #6. Baez by most accounts is still raw at shortstop, but while he committed 44 errors in 2013 between three teams he only has eleven this year. Many people see him moving to second, but the Cubs have another prospect in Arismendy Alcantara at second, although he's getting time at center field now. One of these shortstops could be flipped for pitching, but which one --the one with demonstrated big league production like Castro or the high ceiling guy like Baez (big bat) or Russell (good glove)? It's a problem every team would like to have, and it's safe to say that Theo Epstein and Jed Hoyer are nowhere near finished in constructing the Cubs team of the future, and that at least two, perhaps all three of these players will play key roles.
There's a big lump in the middle of the chart of players making decent money and having very good years for their teams. Jimmy Rollins appeared to be an unnecessary piece for the Phillies, in the decline phase of his career and sparring with manager Ryne Sandberg during spring training. He's rebounded nicely this year. The Phillies have a 19-year-old shortstop named J.P. Crawford in high A ball, so if Rollins can stay productive for another couple of years it can give Crawford time to develop. Or the Phillies could trade with the Cubs.

Baseball's best third basemen
Alexei Ramirez and Starlin Castro gave every Chicago fan a display of ineffective fielding as they tied for the lead  in shortstops errors with 22 apiece in 2013. Ramirez is an All-Star this year and playing better defense but is still allergic to taking a walk, which probably explains why he's been dropped in the batting order from #2 to #6. There are rumors he could be traded, although it's not readily apparent who his replacement would be.
Asdrubal Cabrera, J.J. Hardy, Elvis Andrus and Ian Desmond are all having solid years. Much has been made of Hardy's power dropoff, which doesn't appear to have hurt the Orioles' playoff chances. Cabrera hit 25 home runs in 2011 and apparently became convinced he's a power hitter. He has some power, but not enough to justify striking out three times as often as he walks. Desmond continues to hit for power but his average has dropped precipitously. Andrus is doing something very interesting that I'm sure means nothing but I still find intriguing -- he's currently leading the majors in hitting into double plays. He's generally batting #2 behind Shin-Soo Choo, so I'll just state I find it baffling and it probably means nothing.
Joining Jhonny Peralta on the 50-game suspension list last year was Padre Everth Cabrera, who had been having an All-Star year. He has not returned to his 2013 form -- his batting average is barely above the Mendoza Line and his errors have increased dramatically over last year. His -1.0 fWAR is near the bottom for all players this year, and the Padres may have to search for answers at a position they thought was solved. Maybe they should make a trade with the Cubs.
Even last year there were evident holes in Jean Segura's game. He began very strong for the Brewers, demonstrating speed (44 stolen bases) but not necessarily smarts (13 caught stealing and 9 times thrown out on the base paths) or the ability to take a walk. That was okay -- he was only 23 and expected to develop with more experience. It's too soon to say this won't happen, but that development is not occurring this year -- his average is in free fall, errors are creeping up and his OPS is down over 150 points. He'll never be a power hitter, so his future has to include being more selective at the place and taking more pitches since he can't steal first.
There's a trend in baseball toward younger players for any number of reasons, but that trend is being bucked at shortstop this year. Many of the best players are mid-career, which isn't necessarily a bad thing, just interesting. There are bright spots on the horizon like Chris Owings, but he seems to be the exception. This could be a blip and indicative of no major macro trend and simply a function of the fact it takes time to learn to play major league shortstop effectively.
I can't write a post on shortstop without mentioning Derek Jeter -- in FanGraphs career fielding for all players from 1871-2014, he's fourth-worst for all players and the worst fielding shortstop by a fairly healthy margin. He will also be elected into the Hall of Fame at the first opportunity and inducted in August 2020 and you won't hear one word from me because he'll deserve it as every other facet of his game places him among the best shortstops ever. We've been privileged to have witnessed him play.
All data from FanGraphs
Scott Lindholm lives in Davenport, IA. Follow him on Twitter @ScottLindholm.

b. a person whose abilities, achievements, etc., lie outside the range of statistical probability.