Have the Cubs fixed Jake Arrieta?

The Cubs may have found themselves a dependable starter for the long-term, and he is already pitching—and excelling—in the major leagues.

Share All sharing options for: Have the Cubs fixed Jake Arrieta?

Baseball fans could be forgiven for not giving Cubs starter Jake Arrieta much thought this season, but on Monday night, the right-hander earned some much-deserved attention.

Arrieta took a no-hitter into the eighth inning against the Red Sox before a Stephen Drew single with two outs broke up the right-hander's no-hit bid. The Cubs hurler allowed just two baserunners all night, and no Boston batter even reached second base with Arrieta on the mound.

Turns out, though, that Monday's stellar outing against the Red Sox is becoming habit more than anything else for Arrieta, who allowed just four runs during six starts in the month of June.

The 28-year-old's June stats are remarkable and should (if Monday's performance didn't already) place a larger spotlight on Arrieta moving forward. In 39.1 innings pitched this past month, Arrieta struck out 48 hitters, while walking only six; opposing batters reached base just 19% of the time against him during that stretch.

Even more fitting, Arrieta is coming into his own almost one year after the Orioles traded the righty (along with Pedro Strop) to the Cubs for Scott Feldman last July.

How has Arrieta found such success in Chicago after struggling so mightily in Batlimore for multiple seasons?

Once a top prospect for the Orioles (MLB.com ranked him 36th among minor league prospects back in 2009), Arrieta saw injuries and control issues plague his time in Baltimore. Whether through stellar coaching, improved mechanics, or a change in scenery (or, most likely, all three), the Cubs have finally been able to wriggle some strong results out of Arrieta's raw talent.

The five-year veteran possesses all the physical attributes you would expect from a major league hurler—he stands at 6-foot-4, weighs 225 pounds, throws a fastball that averages 94.6 mph and also has a hard, late-breaking slider in his back pocket. What's more, Arrieta has shown no substantial changes in his pitch usage since moving to Chicago.

Yet his improved command in a Cubs uniform has been the biggest factor in allowing Arrieta's frontline stuff to finally yield strong results at the major league level.

Comparing Arrieta's zone chart from his time in Baltimore (in this case, from 2011 to July of 2013) to his zone chart this season for the Cubs reveals just how improved the right-hander's command is in 2014. 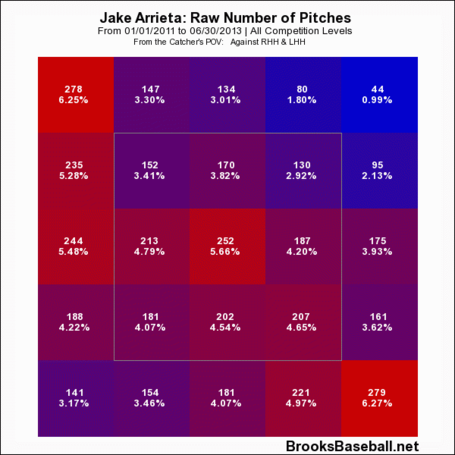 While with the Orioles, Arrieta was all over the place, working up in the zone (and at times right down the middle) with surprising frequency.

His zone chart in 2014 tells a different story: 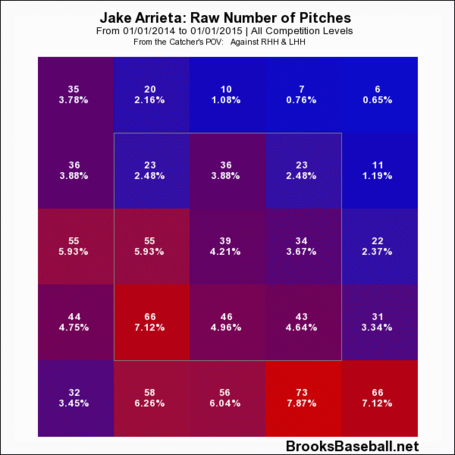 With the Cubs this season, Arrieta has worked down in the zone at a far greater rate, and also avoided catching too much of the plate, especially when compared with his time in Batlimore.

So Arrieta has not only cut down on his walks, he has also shown an improved ability to command his pitches within the strike zone as well, a reality that has undoubtedly allowed his four-pitch mix to find success at the major league level.

For the Cubs, Arrieta might just be the antidote to what the club's rebuilding project is missing—a starter who can pitch near the top of the rotation. With loads of hitting talent knocking on the door in the upper minors, Arrieta now gives the Cubs a pitcher they can potentially build a rotation around.

Whether Arrieta can continue pitching this well for the Cubs remains to be seen (with just 64.2 innings pitched under his belt in 2014, the small sample size caveat still applies here). Even so, Arrieta appears to have turned some type of corner, with improved command buttressing what was already an impressive arsenal.

At the very least, Arrieta has earned himself some moments like he experienced Monday night, when the road crowd at Fenway Park gave him a standing ovation after Drew broke up his no-hit bid.

As Arrieta told MLB Network following his outing, "After sucking for so long in the Orioles organization, it feels good."