At first glance, Giancarlo Stanton's video-game numbers this season might appear to be the result of some fortuitous bounces. However, he's not been as lucky as one might think.

The ballplayer formerly known as Mike Stanton has always been a physical force at the plate, evidenced by the now-second-longest home run of 2014 (the top spot now held by Mike Trout) and these older blasts. However, the rechristened Giancarlo Stanton has upped his game even more this year, and he's currently third in the league in fWAR, OPS, wRC+ and wOBA (all behind Trout and Troy Tulowitzki), second in total bases behind the red-hot Edwin Encarnacion, and fourth in home runs. He's on pace to set new career highs in pretty much every offensive category, including one that inspires some healthy skepticism: BABIP.

While league-average BABIP usually ranges from around .290 to .310, Stanton's is an absurd .380 in 2014, trailing only Carlos Gomez. Over 247 balls in play, this works out to about 20 extra hits this season, inflating his average from .246 to .312. There's more than meets the eye to Stanton's numbers, though.

xBABIP is like other stats preceded by an "x": it's an adjusted version that's supposed to better capture the player's true skill. xBABIP gives more credit to players who hit line drives and have high HR/FB ratios, while penalizing players who pop up frequently. I used this xBABIP calculator, originally developed by slash12 at Beyond the Box Score, to dig deeper into Stanton's season. The table below shows his career BABIP and xBABIP, along with some batted ball data.

The result points toward Stanton's success being governed much more by his skill and power than by a run of good bounces. Yes, his BABIP and xBABIP are both above his career numbers, but they aren't as out of line as they initially appear. Plus, with five seasons of well-above-average BABIP, Stanton's sample size is approaching where the point where we can reasonably conclude he's one of those hitters who bucks the trend, like Ichiro and his crazy .344 career mark and 13 of 14 seasons above .300.

Some of this ability is explained by Stanton's sheer strength, and his ability to muscle balls deeper than most other hitters. The next table breaks down all balls in the air — popups, fly balls, and home runs — by how far they traveled. (Since hitF/X and fieldF/X data aren't available yet, this is by where the balls were fielded; calculations from Baseball Heatmaps.)

Pedro Alvarez is getting nothing to hit

The reasons behind Pedro Alvarez's struggles in 2014 are somewhat unclear, but perhaps the way he's being pitched has something to do with it.

Keep in mind Stanton plays his home games in cavernous Marlins Park, which is 344 ft. / 418 ft. / 335 ft. to left / center / right, with deeper power alleys, and has a HR park factor of .818, which is sixth-worst in the majors. That means his power numbers would be even better if he played in a more hitter-friendly park — although he does get the benefit of playing several games a year at Atlanta and Philadelphia, which both have 1.145 HR park factors.

So what can we expect from Stanton over the rest of the season? Will he keep up his torrid pace, regress to more average production levels, or fall off completely?

Among the major projection systems, ZiPS and Steamer both forecast Stanton as being worth another 2.8 fWAR, to bring his season total to 7.1. That number would have placed him sixth in the majors last year. Stanton's already amassed 4.3 fWAR in a mere 80 games (conveniently, 81 for his team), so even playing at two-thirds of the level he did in the first half would put him above those projections. With Stanton's tendency to have a high BABIP and his undiminished power stroke, I wouldn't be surprised at all if he beat the forecasts by a solid margin. Plus, the Marlins are only four games out in an atrocious NL East (Atlanta and Washington are tied atop the division at 43-38), so Miami's going to need him to carry their offense if they have any hope of making the playoffs.

As a parting shot, take a look at this heat map from Brooks Baseball showing Stanton's slugging percentage in various locations this year. Pitch him anywhere up, and expect to get crushed. Leave one in the middle of the plate, and you'll be reaching for your tape measure. 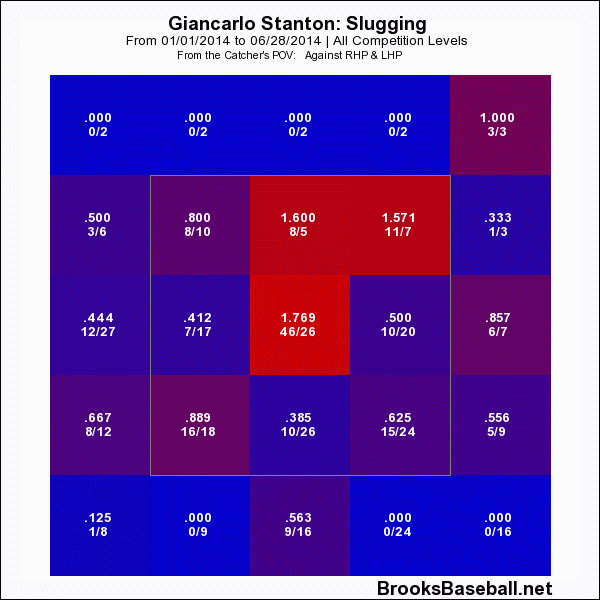