Generally it's a good practice to avoid analyzing pitchers that have thrown less than 50 innings in the majors due to small sample size issues. Obviously this holds true in the beginning of any given season, but it also pertains to guys called up in the middle of the year. Jesse Hahn, though, deserves some attention given how good he's been for San Diego.

Jesse Hahn was never meant to be the main target in the deal that brought Alex Torres to San Diego. The massive seven player swap saw five Padres head east to Tampa Bay while Torres and Hahn took a flight the opposite direction and joined the Padres. The deal was a massive one and it took a while for all of the details and players involved to be teased out. Chris Cotillo of MLB Daily Dish wrote up a complete report on the trade that includes bit on all of the players involved, including those San Diego shipped to the Rays.

The focus of this article, though, is the return the Padres got, especially Jesse Hahn, a sixth round draft pick out of Virginia Tech in 2010. Hahn wasn't the key return for Logan Forsythe (the main piece of the trade going to Tampa Bay); that would have been Alex Torres.

Torres himself recently made a lot of news for a non-performance related decision, but his effort on the mound has been top notch so far this season. While his control has left something to be desired (5.13 BB/9), Torres has pitched to a 1.89 ERA over 33.1 IP out of San Diego's bullpen. That still pales in comparison to the season that teammate Jesse Hahn has had in San Diego's starting rotation.

First, the stats. Over 27.2 IP in the majors Hahn has an ERA of 1.95 while striking out an impressive 11.71 batters per nine innings and walking just 3.25 batters per nine. After giving up four runs in his MLB debut, Hahn settled down to a 0.75 ERA, 0.875 WHIP, and 31/8 K/BB ratio over the following 24 innings. This run was capped off last night when Hahn threw a 5 inning gem (if such a thing exists) where he struck out 9 Reds over 5 innings. The Reds managed only 5 base runners (2 on walks and 3 on base hits) and failed to score a run against Hahn or any of the Padres' relievers.

Prior to being traded Hahn was the #6 prospect in the Tampa Bay system according to Baseball Prospectus, but that was the most bullish any outfit was on his upside. In aggregate Hahn ranked 26th among the Rays top prospects according to analysis by Beyond the Box Score's own Chris St. John. Needless to say, he wasn't considered a sure thing to contribute at the MLB level, and most saw him as a reliever in waiting.

Baseball Prospectus summed up the downsides for Hahn thusly:

24-years-old and yet to reach Double-A level; can overthrow at times; good control at present, but command within the zone is still loose; some sources think delivery and arm action better suited for the bullpen.

Hahn though, had some traits that could make you a dreamer. Jason Parks certainly bought in:

Hahn is legit, with a late-innings fastball that he can maintain into starts, a deep secondary arsenal that he can throw for strikes, and a good overall feel for pitching. Sources are mixed on his ultimate role, but I see a starter—and perhaps a very good one. He’s behind the developmental curve, and the Rays tend to barbeque their pitching prospects (low and slow), but 2014 could be the year that Hahn is pushed, most likely starting at the Double-A level.

This analysis has been spot on so far, as Hahn began 2014 in Double-A San Antonio's bullpen. He would quickly be moved to the rotation, though, and started building up his innings as a starter. Over 38.1 IP at Double-A, Hahn pitched to a 2.11 ERA and allowed only one home run to an opposing hitter. This was obviously alluring enough for the Padres to make the call to bring him up to the major league squad despite him having only thrown just 159.1 innings in the minor leagues.

Since being called up, Hahn has continued the three things that made him so successful in the minors. He's struck a lot of hitters out, attempted to minimize walks, and kept the ball in the ballpark (except for his first start against Pittsburgh where he gave up two home runs). Hahn has done this with what I'll call a traditional sinker-heavy approach. He's a ground ball machine with 2 out of every 3 balls in play off Hahn's sinker being ground balls, and another 50% of the balls in play off his four-seam fastball being ground balls. Those two pitches make up 81% of his first pitches to left-handed hitters and 77% of his first pitches to right-handed hitters.

If opposing hitters fall behind in the count, Hahn abandons the sinker in favor of pitches with better whiff rates like his change or curveball. He also tries to use his hard fastball as a strikeout pitch once ahead in the count.

Below is a chart that shows how Hahn's pitch usage changes based on the count and handedness of the batter with red boxes being increases of 10% or more over his baseline usage and blue boxes being decreases of the same magnitude. It's pretty clear how his preferences shift depending on who's ahead in the count. 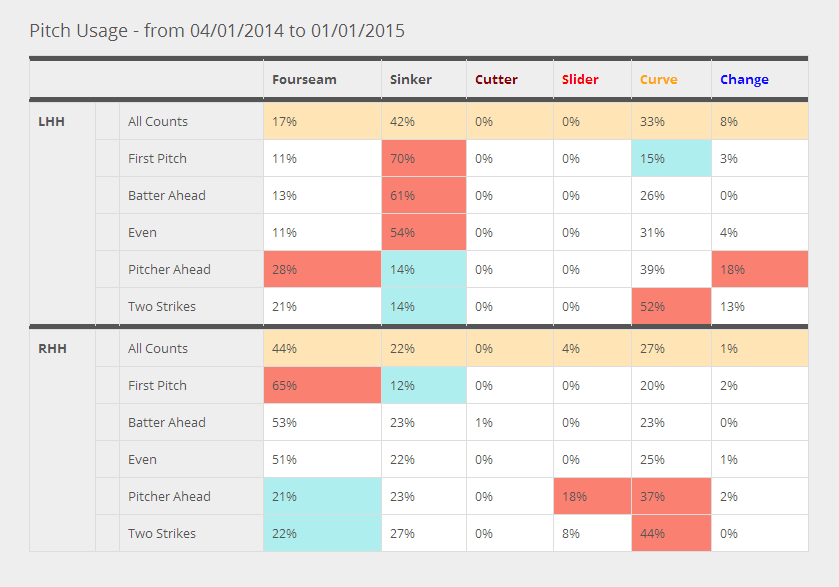 Essentially Hahn goes after hitters early in the count trying to get ground balls and weak contact. Then once he's gotten ahead in the count he goes in for the kill, utilizing his curveball or change up, both of which have whiff rates over 40%. With 2 strikes on the batter Hahn goes to a curve or change 65% of the time against lefties and 44% of the time against righties. This approach is what has helped him keep his pitch counts under control as he's averaging just 14.54 pitches per inning over his past four starts despite striking out nearly 1.3 batters per inning.

There's one last point about Hahn that's worth noting as it could have a big impact on his ability to continue pitching well moving forward. Part of what makes Hahn so difficult to hit is that all of his pitches move, especially his fastball and sinker. That arm-side run makes him difficult to hit, but it could also make it more difficult for him to find the strike zone. As long as Hahn can continue to throw strikes with those pitches, he should be in good shape moving forward.

That said, let's take a look at something that I last discussed in my analysis of why Sonny Gray would become an ace. According to Beyond the Box Score's own Jon Roegele, the MLB strike zone ranges from 400 - 500 square inches in size. When Jesse Hahn releases a pitch, the ball could end up anywhere between 11 inches to his arm side from where you would expect it to 10 inches to his glove side from where you'd expect. From a vertical standpoint his fastball drops about 10 inches less than you would expect, and his curveball drops 10 inches more than you would expect. You can see all of these in the chart below showing his horizontal and vertical movement. 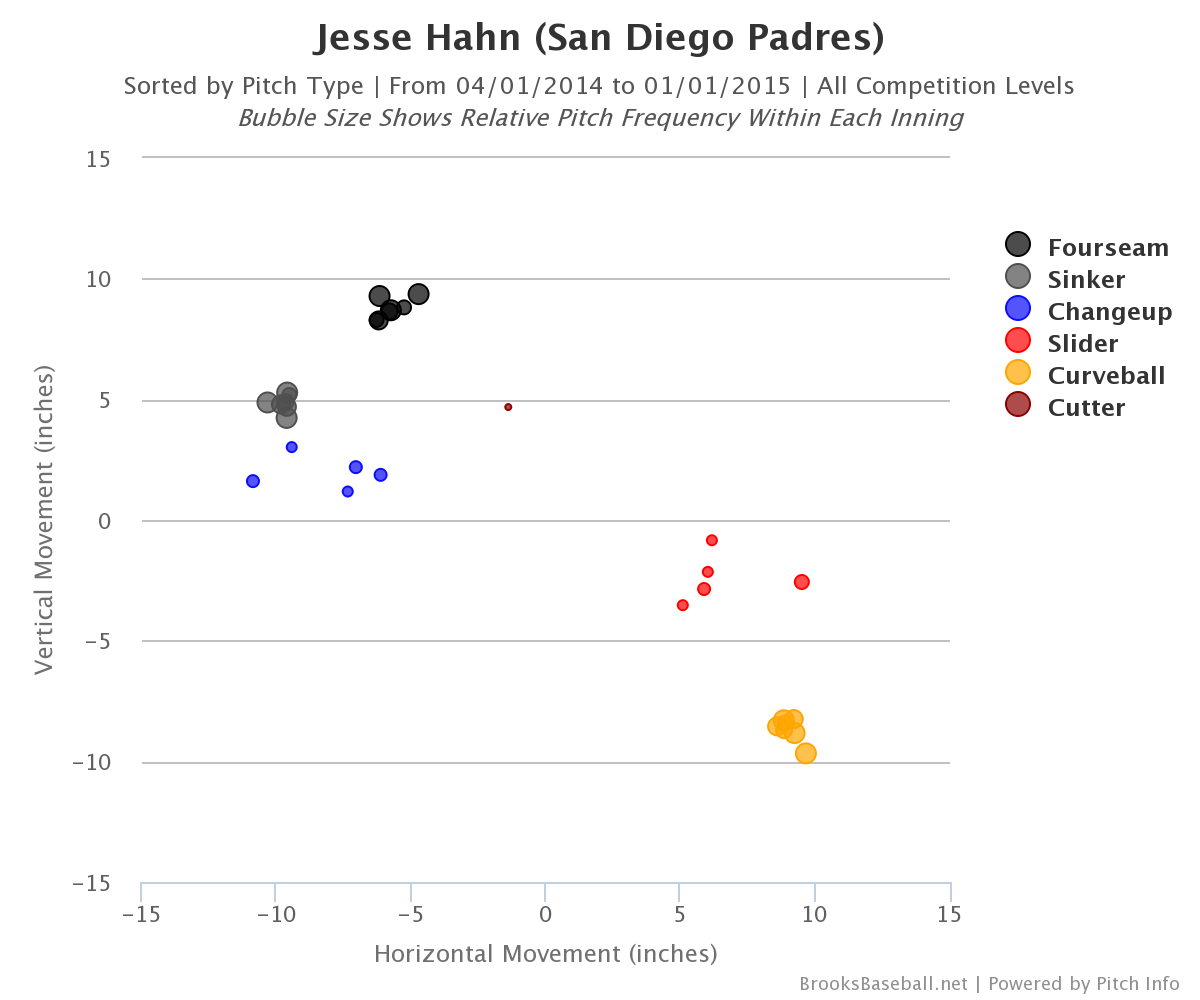 What is the result of this? Essentially any given pitch released by Hahn could end up in an area as big as 420 square inches based on the batters' expectation. That is, if the hitter is expecting a pitch right down the middle, that ball could move to any location within the strike zone based solely on the movement of Hahn's pitches. Granted, the movement will mostly be along the plane of his fastball and curveball, but that's still a massive amount of the zone for opposing hitters to cover.

Jesse Hahn has all of the tools to be an incredible success. This is only further enhanced by the fact that he pitches in San Diego, one of the best parks in baseball to make your home if you're a pitcher. If Hahn can continue to throw strikes and induce ground balls, he could easily become a mainstay of the middle of San Diego's rotation. He may not have the ace level upside of other young pitchers like Sonny Gray, but he can certainly prove his doubters wrong and become a valuable part of the Padres' rotation.