In last weekend's series against the Royals, Jose Bautista took a single away from Billy Butler with a great throw off a healthy bounce. A GIF doesn't do the play justice -- you should really go watch the video -- but here you go anyway, as assembled by August Fagerstrom:

As impressive as Bautista's throw was, I couldn't help wondering how much the Rogers Centre's artificial turf factored into the play. Everyone always says that artificial turf is "faster," but what does that mean? And how would it have affected how Butler's line drive bounced?

All-star baseball physicist Alan Nathan pointed me to this paper from Penn State's Center for Sports Surface Research. The purpose of the paper is to introduce the Pennbounce, a device the authors invented to measure the speed of a baseball bouncing off a playing field. The authors tested their device by shooting baseballs at a predetermined speed and angle at AstroTurf, FieldTurf, natural grass, and "skinned infield" (i.e., infield dirt).

For the purposes of this article, we'll focus on a 90 mph ball (31 m/s) striking the turf at a 25 degree (0.44 radian) angle, since these parameters seem closest to a line drive like the one Butler hit. Since the Rogers Centre uses AstroTurf GameDay Grass, a surface designed to compete with FieldTurf, we'll compare the results obtained on FieldTurf with those from natural grass. The authors' findings for this case are presented below.

In this table, COR stands for coefficient of restitution, the ratio of a ball's speed after impact to its speed before impact. We can use the COR to estimate the angle at which the ball bounced off the turf:

Once this is calculated, we can plug the speed and angle at which the ball left the turf into the projectile motion equations to find how far each ball traveled.* The figure below compares the two paths: the blue path representing the ball after hitting a FieldTurf surface, and the red path representing the first few bounces after hitting a grass surface. Each dot is 50 ms apart, so you can get a sense of not only the distance covered but also each ball's speed. 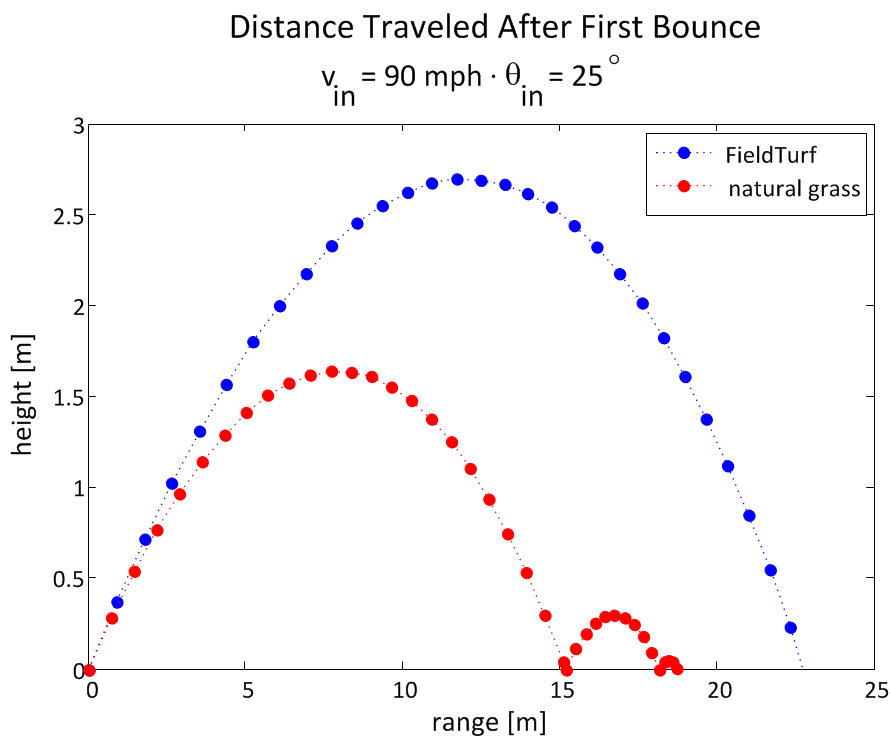 * - We're using Robert Adair's 95 mph figure for the terminal velocity of a baseball.

Go look at the video again, paying attention to how far away Bautista is when the ball first bounces (you can see the rubber pellets the ball kicks up from the turf) and where he catches the ball. It doesn't match the graph very well -- no way does Butler's liner travel 10 feet in the air -- because the angle of incidence is much less than the 25 degrees we assumed. But we can still see that Bautista gets to the ball shortly after its apex. From the graph above, we can infer that if Bautista is playing on a grass surface, he is probably picking Butler's liner off the turf rather than catching the ball at chest height.

That's not the only issue here, of course. A ball bouncing off a grass outfield loses velocity faster, and thus takes longer to travel the same distance. So not only would Bautista needed to bend over to get Butler's single, he would have taken longer to get to the ball. This table shows the time between bounces in the table below. The ball bouncing off FieldTurf travels 23 m in about 1.5 s, whereas the same ball bouncing off natural grass would only cover 17 m or so in the same amount of time.

These are really small differences we're talking about here -- an extra fraction of a second to get to the ball, another fraction of a second to bend down a little more -- so it might be tempting to dismiss this effect as negligible. But the difference between what scouts would call an 80 runner (Billy Hamilton) and a 20 runner (a guy nicknamed "Country Breakfast") is about half a second. Butler was out by a whole step, sure, but if Bautista had taken an extra quarter of a second Butler probably beats that throw.

Given the information, we can conclude that Bautista probably wouldn't have been able to throw out Butler on the same batted ball on a grass surface. That's not to diminish Bautista's play -- it still took a tremendous throw and the know-how to read the bounce* to get the assist. But if Bautista gets credit for an outfield assist on the play, maybe the outfield itself should get one too.

CORRECTION: Soon after I published this article, Dr. Nathan showed me a number of mistakes -- both in my math and my physics -- that invalidates that nice diagram up there. Briefly, the mistakes are as follows:

Having said that, I still believe that FieldTurf helped Bautista on this play. Even if the angles off the turf are wrong (and they are), we can still see from the first table that a ball bouncing off grass loses significantly more energy to friction than a ball bouncing off turf. This will result in a lower velocity, and possibly a lower launch angle off the turf as well.

My thanks to Dr. Nathan -- again -- for helping me realize what I did wrong.

Special thanks to Alan Nathan for his patience and expertise. Any conceptual errors are the author's fault, not his.

Bryan Cole is a featured writer for Beyond the Box Score who hates those little rubber pellets in FieldTurf fields. You can follow him on Twitter at @Doctor_Bryan.