Yasiel Puig just finished his first calendar year in the major leagues. How does his first year compare with others?

June 3rd, 2013 was a red-letter day for the Los Angeles Dodgers, Major League Baseball, and fans, as Yasiel Puig made his big league debut. He was the toast of the league in his first couple of weeks and made Dodgers fans forget about Matt Kemp, who had been Mr. Baseball as recently as 2012 (fear not Dodgers fans, Kemp is only owed $128 million through 2019). There was no way Puig could maintain his torrid pace, and a penchant for running into walls and through coaching signs proved to be an issue. He would have been the runaway NL Rookie of the Year were it not for the equally terrific start of the Marlins' Jose Fernandez.

In this era when anniversaries count as news items, I'll jump on the bandwagon as well. I'm more interested in where Puig fits in the context of best starts to careers, so I pulled a list of players in their first 155 to 157 games. The full list can be viewed in this Google Docs spreadsheet, and I highly recommend spending some time looking at it.

There are five tabs in the spreadsheet and all are ranked from greatest to fewest in home runs, RBIs, batting average and OPS (each tab has its own link), as well as the same data for players whose careers began in 1990 or later. Beginning with home runs, Puig ranks 40th in this group of almost 1,000 players. The incidence of home runs has vacillated wildly over the past 100 years, and some parks are more homer-friendly than others. Puig began his career as home runs were returning to historical norms and plays half his games at a park not exactly conducive to power hitters.

More impressive is where his home runs are hit (adapted from Daren Willman's baseballsavant.com): 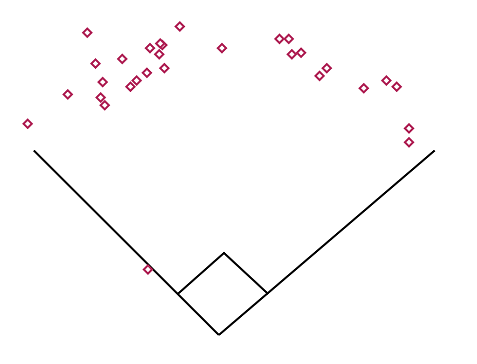 He has a tendency to hit his home runs to left field but uses the entire field. Imagine what will happen as he gets a better feel for pitchers and reaches his prime. As long as he plays for the Dodgers, he won't hit as many home runs as he could elsewhere (this list shows players with the most home runs at Dodger Stadium), but he'll hit more than most other players. 30-35 home runs a season is certainly attainable.

I show RBIs with great hesitation, since they're as much a function of opportunity as hitter ability. Better teams have hitters with more RBIs because there are more base runners available to drive in. Puig ranks in the upper 30 percent of this group, nothing special, but he's batted either first or second in the order in over 75 percent of his plate appearances. So far in his career he's driven in around 14 percent of base runners, right at the major league average. In 2014, it's closer to 20 percent, which puts him in select company. The Dodgers have no shortage of middle-of-the-order hitters with Adrian Gonzalez, Hanley Ramirez and Matt Kemp, and there's no rush to move Puig to third or fourth in the lineup. When that day comes though, watch out.

Where Puig leaves his mark is in batting average and OPS, where he ranks 24th and 14th, respectively. He was extremely hot as he began last year, but declined precipitously as the year progressed. He appears to have fixed that slide as he is second in both average and OPS in the NL. This may not be sustainable, since he has a batting average of balls in play (BABIP) of .395, which is outstanding but unlikely to be maintained. He's second in weighted on-base average (wOBA) and tied with Troy Tulowitzki for the lead in weighted runs created plus (wRC+), so he continues to be a solid mix of power and average.

Looking at the players near Puig shows a wide variety, from those who started great and maintained it like Ryan Braun and Evan Longoria to some like Ron Kittle and Kevin Maas who couldn't. While it's fun to see how Puig compares with baseball players of old, it's more informative to see how he compares with contemporaries, which is what the last tab (Since 1990) shows. I created a simple index by adding the home run, RBI, batting average and OPS ranks and sorting the total low to high, and Puig ranks very comfortably among the best starts in recent history. While there were flashes in the pan (Austin Kearns? Brian Daubach??), for the most part this method identifies the best hitting debuts of recent vintage.

I discussed whether Puig would be able to build on his excellent rookie season in a post some time back, and at that time thought it would be perfectly reasonable for him to regress -- it's extremely difficult to maintain tremendous production. But so far this season, he's not only maintained his offensive production, he's improved it. He's shown significant improvement in not swinging on balls outside the strike zone and is an average to slightly-above average fielder. His base running will have to improve significantly to reach the level of horrible, as he has a penchant of utilizing all three methods (pickoff, caught stealing and thrown out advancing) to squander scoring opportunities.

Should we be making our plans for his induction into the Hall of Fame sometime around 2030? Probably not just yet -- reviewing the top 100 or so players in any of the categories shows many who fell by the wayside due to injury, inability or whatever. However, he's crossed the threshold of hot start and transitioned to outstanding player, one who, along with Clayton Kershaw, will be the cornerstone of the next generation of Dodgers. Have fun with that, rest of the NL West.

Data from Baseball-Reference.com using the Play Index Batter Game Finder feature. Any mistakes in amalgamating the data are the author's.