The second in a series examining the best players in the game by position. This one discusses first base.

My last post discussed the best catchers in baseball, using a method I developed combining player salaries and FanGraphs estimates of their dollar value. This isn't the final word in player evaluation but provides a good starting point to determine which players are playing up to their contracts and which ones aren't.

This scatter graph plots FanGraphs dollar value (FG$V) on the horizontal axis and salaries on the vertical: 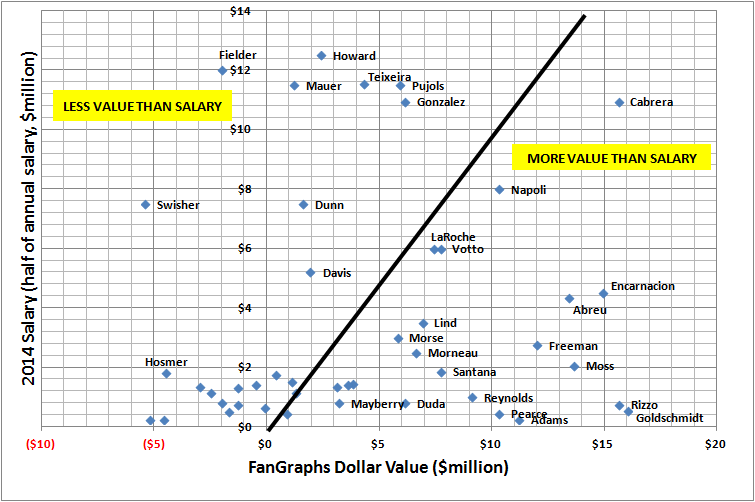 The diagonal line is the boundary between producing more or less value than a player's contract -- players in the upper left are delivering less value than they're being paid, and players in the lower right are delivering more value than their contracts. Salary data comes from Deadspin and are half of 2014 salary to reflect they've played around half a season. Data is through Wednesday, June 25th with up-to-date information available here.

First base is a unique position in that the value players produce on offense dwarfs their defensive contributions, and viewing the best-fielding first basemen doesn't exactly demonstrate excellence relative to the rest of the league. The modern first baseman is a hitter, preferably a power hitter and one comfortably slotted at #3 or #4 in the batting order. The players at the right side of the chart fit this mold to a T.

Since I made this chart Miguel Cabrera has overtaken Paul Goldschmidt as the player with the highest FG$V. However, if value is a criteria, then Goldschmidt is the best, delivering $16 million in value for just over $500,000 in salary. He's already working on a restructured deal that pays him through 2018 with a team option for 2019, but if he continues to produce like he has, that deal will be re-negotiated. The question Goldschmidt will have to ask  himself at some point is whether he believes the Diamondbacks are headed in the right direction -- prior to this year, they had enough good talented young pitching to seem like they were. Given his contract, it's probably a moot question anyway.

Miguel Cabrera continues to be Miguel Cabrera and shows no sign of slowing down, and moving to first will only help him. Even though he's highly paid, his production still outpaces his salary by a healthy margin. An argument can be made he's having a "down" year, if a year in which he'll still hit around 30 home runs with an OPS over .900 can be described as such without causing massive consternation to the editors of the Oxford English Dictionary. If he goes on a tear (hitting 22 more home runs by the end of the year) he'll be the eighth player in baseball history to hit 400 home runs by age 31.

Cubs President Theo Epstein and GM Jed Hoyer have acquired Anthony Rizzo three times between them -- in the draft with the Red Sox, in a trade to the Padres and another trade to the Cubs. They thought enough of him to sign him to a contract extension after the first month of the 2013 season that keeps him under team control through 2021. He then seemed to fall apart somewhat but has rebounded nicely in 2014, and a look at his swing rates provides some reasons. He's dramatically reduced his swings on pitches outside the strike zone, increased his line drive percent (to the extent any player can control that, which I freely admit), and most importantly, is having a little more luck. His batting average on balls in play in 2013 was .258, in the bottom 10 among qualified hitters, and which has improved to .314 this year. He's delivering the production Epstein and Hoyer expected when signing him to his new contract, and as younger players like Kris Bryant, Javier Baez, Jorge Soler and Arismendy Alcantara join the team, Rizzo will be one of the core players.

Poor Edwin Encarnacion, delivering tremendous value on a team playing good baseball and virtually no All Star votes to show for it. He has the most home runs since 2012 and received MVP votes in the past two years, but still elicits a confused shrug from fans who live outside of Canada. If the Blue Jays can stay in playoff contention (Baseball Prospectus playoff odds has them around 60 percent as of this writing on Saturday), more people will know who Edwin Encarnacion is.

I don't like to lump Brandon Moss, Jose Abreu and Freddie Freeman together because they're really quite distinct, but they're all having solid seasons. Abreu is under White Sox conrol through 2019 at $68 million, Freeman through 2021 at $135 million and Moss will be arbitration-eligible after this year. Moss is the proverbial late bloomer, only getting serious playing time after coming over to the Athletics in 2012 at age 28 and will be an interesting case -- in the new baseball reality, how much money will a 30-year-old first baseman get in arbitration?

There are a number of highly paid players like Albert Pujols and Adrian Gonzalez who are having decent seasons but not producing up to their contracts. It will probably be impossible for them to deliver the value necessary to justify their contracts as they've entered the decline phase of their careers and will be looked back at by future people as players who tipped the scales against long-term contracts for players over 30. Then again, I've been thinking that for a couple years, and while I do believe these types of contracts are decreasing, they won't completely disappear.

Prince Fielder is on the 60-day DL and quite possibly out for the year. For the past three or four years I looked at Fielder and kept saying to myself "Mo Vaughn." He defied this description, but time just may have caught up with him. The trade that sent him to the Rangers for Ian Kinsler will be among the best the Tigers ever have or will make -- even though they're still on the hook for $40 million of the $168 million he's owed through 2020, the rest is on the Rangers. Good luck with that.

I noted earlier that Edwin Encarnacion leads all hitters in home runs since 2012, and Chris Davis is third on that list. SB Nation, the parent of Beyond the Box Score, takes copyrights seriously and allows us to only used approved photos, so I created this original artwork to illustrate the trajectory of Davis' career over the past year: 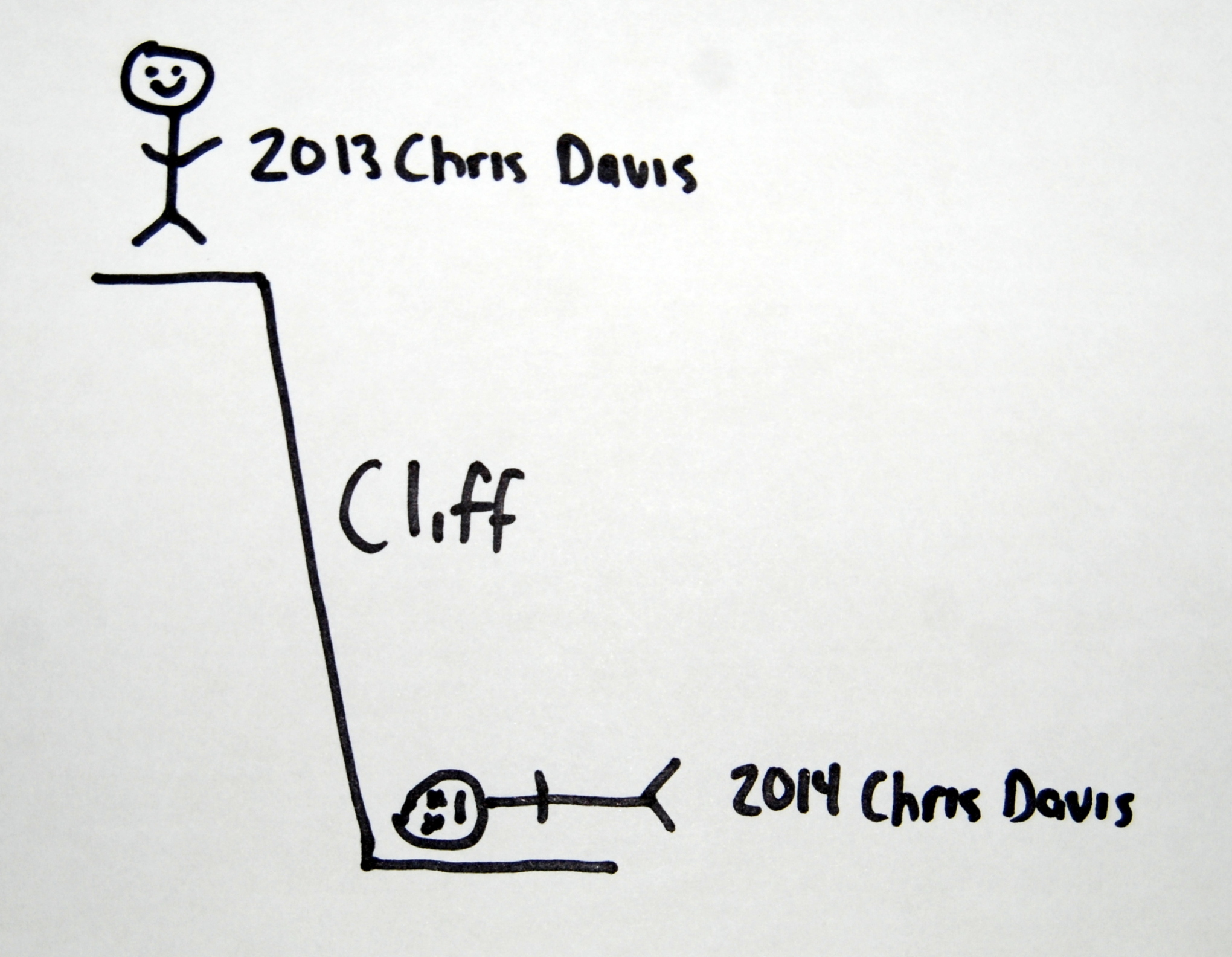 He hit 53 home runs last year and is on a pace for half that. Couple that with J.J. Hardy and the Orioles have experienced a sudden and dramatic drop in home runs -- through 79 games in 2013 they had hit 108 but only 92 this year. This doesn't appear to have affected them much as they're still in the thick of the playoff chase, but  they'll need a more productive Davis if they want to stay competitive.

Joe Mauer is proving he is human after all. It's not unreasonable to say Mauer's contract as a catcher could be justified, but as a light-hitting first baseman he's an albatross. Have no fear, Twins fans, he's only owed another $92 million through 2018 -- this too shall pass, just not any time soon.

This was the Baseball Prospectus 2014 preview for Ryan Howard:

We told you so.

The two big disappointments are Nick Swisher and Eric Hosmer. Hosmer is probably the best fielding first baseman, to the extent it matters, but has regressed significantly at the plate. The Royals aren't exactly blessed with power as it is, and if they plan on maintaining their recent flirtation with first place, they better hope he comes around. Then again, Dale Sveum is their hitting coach, and given the success he had with the Cubs as their manager the Royals should . . . well, probably re-hire George Brett.

Nick Swisher is amazingly consistent, putting up 20-25 home runs and driving in around 90 runs and so annoying to be around he's on his fourth team in seven years. He's owed $44 million through 2017 and is nowhere near producing enough to justify that amount. The possibility exists he's just having an off year, but at 33 the odds are not in his favor. It is a very real possibility that all the stars aligned in 2013 for the Indians to make the playoffs, but as of this writing they're ninth in the wild card standings and 4.5 games back. Nick Swisher will have to become the Nick Swisher of the past five years or so if they have any hope of contention.

As offense continues its retreat from the historical highs of 1995-2007, it becomes even more important for power hitters to actually produce. It doesn't necessarily have to mean home runs, but power hitters need to drive baserunners in when the opportunities arise. The difference between the good half and bad half of the chart reflects the ability (or lack thereof) to hit, since very little of first base value comes from defense. As such, it's important for players at essentially a one-dimensional position to be really good at that dimension.

All data from FanGraphs and Baseball-Reference. Salary data from Deadspin.