In Monday's White Sox-Dodgers game, Sox second baseman Gordon Beckham had a bad night in the field, committing two errors. One in particular was the difference in the game, muffing a likely double play in the sixth inning with Matt Kemp at bat and Clayton Kershaw on first (see entire inning sequence here). This, compounded by another error by Conor Gillaspie, allowed the Dodgers to score five unearned runs in the inning, all they needed to win 5-2. Five runs, all unearned -- not a recipe for success. 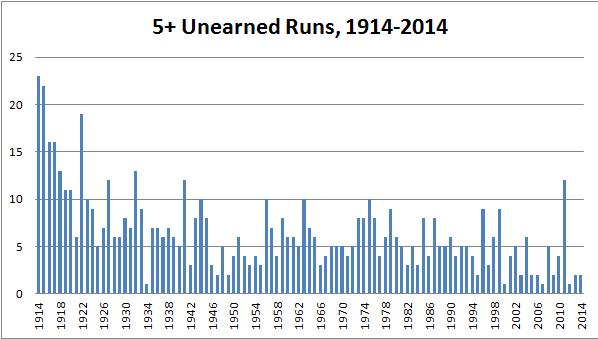 As fielding improved over the past 100 years, unearned runs logically decreased to the point where innings like the White Sox had are extreme exceptions. They should probably keep it that way -- since 2000, teams are 11-40 when giving up five or more unearned runs. The surprise isn't the lopsided record as much as any team giving up that many unearned runs won the game.

Data adapted from information at Baseball-Reference.com. Any mistakes in compiling are the author's.