The fall of Joe Mauer

Joe Mauer left his spot behind home plate to make the transition to first base this season, but it's his hitting that's cause for concern.

Share All sharing options for: The fall of Joe Mauer

After appearing in 897 games behind home plate, Minnesota Twins' Joe Mauer made the full-time transition to first base at the beginning of the 2014 season. Mauer suffered a season-ending concussion on Aug. 20 of last year, which was ultimately the final straw in Mauer's catching career. The Twins and Mauer agreed that a change needed to be made, and by moving to first base, along with the occasional DH stint, the chance of injury would decrease and hopefully prolong his playing days.

Being able to play everyday was also a huge factor in this decision. Catchers take a beating day in and day out and normally play only about five days a week (unless you're a freak like Yadier Molina). But when a team has a guy like Mauer, one of the game's best hitters, they need him to be in the lineup as much as possible. Making the move was smart for both parties, despite the extra work it meant for Mauer.

"It's tough," Mauer said back in March. "It's a big change of positions. As far as swinging and hitting and all of that stuff, that's the same. But I'm just taking a lot of ground balls and no bullpens."

Did you notice how he basically said he was not worried about the hitting aspect of his game? To be fair, if I was a career .319 hitter and the owner of three batting titles, I wouldn't be too concerned about my hitting either. But, through 69 games, Mauer's .260 batting average, .298 wOBA, and 87 wRC+ are all career lows. Maybe he should have paid more attention to his bat.

Now, before you claim that Mauer's struggles are stemming from him focusing more on his fielding than hitting -- which may be true -- let me remind you that he had already played 55 games at first base before this season. It's not like the position is entirely new to him. I wouldn't say Mauer had a close relationship with first base up until this year, but the two were at least friends. That's why I refuse to believe his lack of production has anything to do with him switching positions. There are too many other factors contributing to his down year.

Throughout his career, Mauer, a left-handed hitter, has used the entire field as good as anyone. Take a look at his spray chart beginning from 2007 (the first year this data was available). 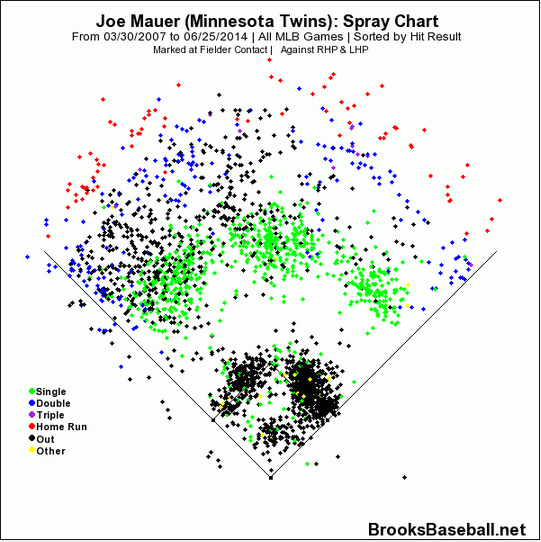 When Mauer pulls the ball, something he normally doesn't do, he's "just" a .279 hitter, but when he hits the ball the opposite way or shoots it back up the middle, he's a .436 and .376 hitter, respectively. In fact, since his rookie season in 2004, Mauer has the highest batting average in the Majors when going the opposite way. This is what makes him so special. At least it used to. This season, he's accumulated only eight hits when pulling the ball, and his opposite and center field averages are significantly down as well. But why?

For starters, his eye at the plate has gotten considerably worse each season since 2012 as shown by this chart.

He's chasing more pitches, and as a result, he's striking out more and walking less. This isn't the Joe Mauer we know, and likely won't be the Joe Mauer we know three months from now. According to ZiPS Rest of Season projections, Mauer will up his average by about 20 points and decrease his strikeout rate by three percent. That's still not up to Mauer's caliber, but hey, it's better than no improvement.

Somehow, the Twins are only three games under .500 and six games back in the AL Central. If Mauer can be half the player he was for the last 10 years, the Twins might have a shot at a playoff berth.