We return to the subject of hamate fractures, now with a focus on their effect on switch hitters.

Last week, I discussed the effects of hamate bone fractures on a hitter's power (as measured by isolated power) and, despite a very small sample size, found some interesting results. In an interesting twist, it was found that isolated power returned to pre-fracture values and in most instances, actually improved after roughly a year of at bats. This week, we return to the hamate injury, following up on a promise to investigate whether this phenomenon held true with the switch hitters who have suffered the injury since 2007. In the table below, we have all players who suffered hamate fractures suffered at the MLB level, with switch hitters' names in bold:

*Cabrera suffered additional fracture in opposite hand in 2011 while in minors.

Calculation of ISO is the same as the previous article, with players with at least 550 plate appearances from either side of the plate before and after surgery being considered for analysis. With this criteria, our sample goes from small (five switch hitters) to miniscule, with only Pablo Sandoval and Everth Cabrera surviving the plate appearance filter. It should be noted that both players have fractured the hamate bones of both hands, with Cabrera suffering a right hamate fracture as a minor leaguer in 2011. Despite this, the Padre infielder still has collected enough MLB plate appearances to analyze, but only in reference to the right hamate fracture; Cabrera broke the left hamate as a rookie in 2009 and did not have enough PAs pre-fracture for left hand fracture data to be considered. Due to sample size, I will move forward with the analysis separating left and right sided swings before and after their fractures; doing this gives us a slight boost in the size of the dataset and also innately makes sense, as the mechanics of both swing for a given hitter are disparate enough to warrant the split. The results are as follows:

At this level of granularity, we find that Cabrera's swings suffered fates post-surgery of the right hamate. As a lefty and with his right hand being the guide hand at the bottom of the bat, his power took a nosedive, while his ISO actually improved from the opposite side. Caution must be taken when looking at this result, given Cabrera having a previous left hamate fracture possibly affecting his production and these results.

For Sandoval, the data is more robust, with enough plate appearances before and after both hamate fractures to more confidently evaluate any findings. Overall, the Giants third baseman appears to have suffered upon his return from fracture surgery with respect to power, seeing ISO drops from both sides of the plate after both surgeries.

Using the pooled Cabrera-Sandoval data, we find the following trends; first split across surgery and swings:

...and here, we find ISO average and standard deviation collapsed across swing, only showing pre- and post-surgical values:

No matter how you slice it, the switch hitter dataset shows ISO drops after surgery, finding a statistically significant difference in pre- and post-operative power in our (very small) sample, with a t statistic of 2.70 and p-value of 0.015, using a paired samples t-test. However, effect size is again miniscule, only weighing in with a 0.957 Cohen's d, again prompting us to be wary of making any boisterous inferences from this result.

Let's once again turn to graphs of the ISO trends post-operatively; first, Cabrera's numbers after his right hamate surgery: 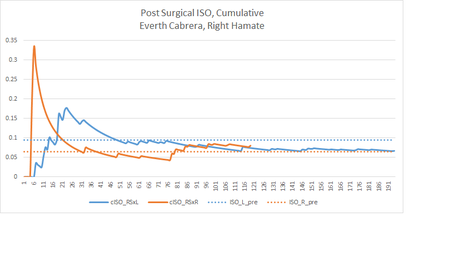 ...and here, we graph out Sandoval's trends from both swings after both fracture surgeries: 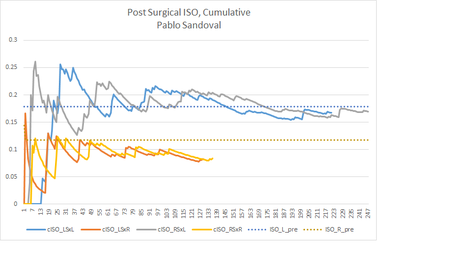 Not surprisingly, the cumulative ISO data is a little noisier, with no real stabilization of the ISO, just using the eyeball method; however, we do see the trend of power not quite returning to what it once was for the switch hitters. As mentioned previously, this sample is incredibly small, so perhaps these hitters could return to previous averages with additional plate appearances collected from both sides of the plate. Considering the sample size criteria involved a pooled 550 PA before and after surgery between both swings, this might be the case. We also have some bias in the sample, in that both players discussed had both hamates fractured, which could affect both swings in a fashion that having only one fracture does not. As such, the data as presented are too wrecked by sample size limitations to make any reliable conclusions about the results. However, an interesting trend in post-surgical power reductions, in opposition to the result found in non-switch hitters, could benefit from additional data collection and research, providing reliability and clarity to the notion that a switch hitter's power is more susceptible to declines from hamate fractures than compared to a non-switch hitter.

Data courtesy of FanGraphs and Retrosheet. A special thanks to John Choiniere for his data collection and parsing efforts.