The Rockies new LOOGY is off to a great start. Will it last?

Share All sharing options for: Boone Logan is way above sea level

One of the hardest aspects of baseball to analyze is relief pitching. Relievers are impossible. They're fleeting. The best only throw 60 or 70 innings a season and they're used in such peculiar ways. If I ever dip my toes into perils of such analysis, it's almost always about the "proven closer" myth or how relievers are used more generally. Picking out one single relief pitcher and trying to say something meaningful is a serious challenge, but this case is interesting, so let's try it anyway.

Boone Logan, a LOOGY with a reasonably cool name, signed a three-year, $16.5 million deal with the Rockies this offseason and the reaction wasn't favorable. Our Rockies site, Purple Row, offered one of the more positive takes, and they weren't thrilled:

So to put a bow on this of some sort, I don't hate the Logan signing - especially since it adds pitching depth - but I just can't walk away from this feeling that the Rockies made the best deal possible. I know after what I wrote last week I probably sound like the kid who asked for Lincoln logs as a present and is now complaining that he got the "Horseshoe Hill Station" set instead of the "Classic Deluxe" box, but I just can't shake the feeling that we could have done a little better here with the type of money available.

The idea of signing a reliever for three years pushes the bounds of accepted practice and those deals are only supposed to go to the game's best. Could you pay a LOOGY like Logan five or six million a season? Sure. Do you want to commit that much over three seasons? Probably not. The track record isn't even great for deals like that for non-specialists. For every Joaquin Benoit, there are plenty that don't go as well.

But the Rockies weren't intimidated. Call it foolishness, call it chutzpah, call if foresight. It didn't look wise at the time and I haven't seen enough to fundamentally reshape my opinion, but I have seen enough to entertain the possibility that the Rockies had reason to be bullish on Logan. Regression is probably coming, and he's only faced 42 batters in 2014, but for a team that struggles to get free agent pitchers to come play for them, it's going well so far.

Let's start with appearances, innings, and total batters faced so that you have an idea of how thin the ice on which we're standing is:

Super small samples, but let's play this out. Take a look at his ERA, FIP, and xFIP over his career, and keep in mind that Logan is playing half his games in Colorado, but also that he's pitching better on the road this year. 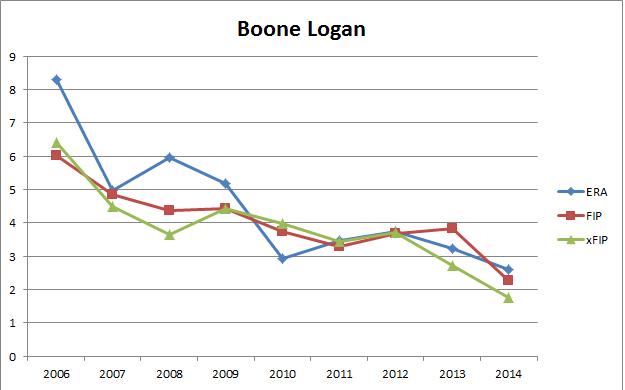 Career best results across the board. But you're smart enough to wonder why reliever ERA in 10 innings is even a thing worth plotting. Fair point, so let's grab strikeout and walk rate. It's still only 42 batters, but this is certainly something, considering that strikeout rate usually settles in after about 70 batters faced. 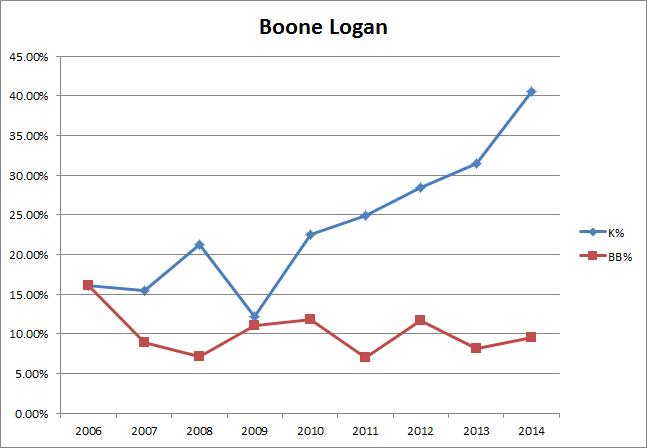 Logan is finding more strikeouts and it's leading to better results over the season's first month. Mirage or thing worth watching?

I know there is a lot of information in this table, but I'll call your attention to a few things. Logan is generating a lot more swings outside of the zone than normal while also throwing fewer pitches in the zone than ever. He's also inducing the lowest contact rate of his career, driven entirely by swings and misses at pitches in the zone. Put together, he's getting batters to swing at stuff outside the zone and they're making contact occasionally, which is probably a good thing. When he comes into the zone, they're missing quite often. That's probably a good thing, too.

You shouldn't leave this post thinking Boone Logan is becoming a relief ace who is going to pay for himself three times over, but I think it's worth keeping an eye on Logan going forward. Plate discipline stats tend to stabilize more quickly than anything, and we're seeing some early signs of life here. Paying a LOOGY $16.5 million probably wasn't the best idea for the Rockies, but for now, it's going as well as they possibly could have hoped.