Is Collin McHugh the real deal?

Collin McHugh has burst onto the scene this year. Can he keep it up or will regression take him?

Share All sharing options for: Is Collin McHugh the real deal?

Heading into this season the Houston Astros were a near lock to be a bottom feeding team. For the most part they’ve lived up to these expectations in part because their current Major League product on the field isn’t that great. However despite this there has been plenty of room for optimism and a few guys exceeding expectations. Case in point, Collin McHugh. When the Astros claimed Collin McHugh off waivers from the Rockies last winter little if anything was expected of him. Yet, here we are a little under a third of the way through the season and Collin McHugh has pitched brilliantly. How has he made this transformation and can he keep it up?

To begin I always like to look at a pitcher’s repertoire to see if there are any changes and in McHugh’s case there are quite a few. 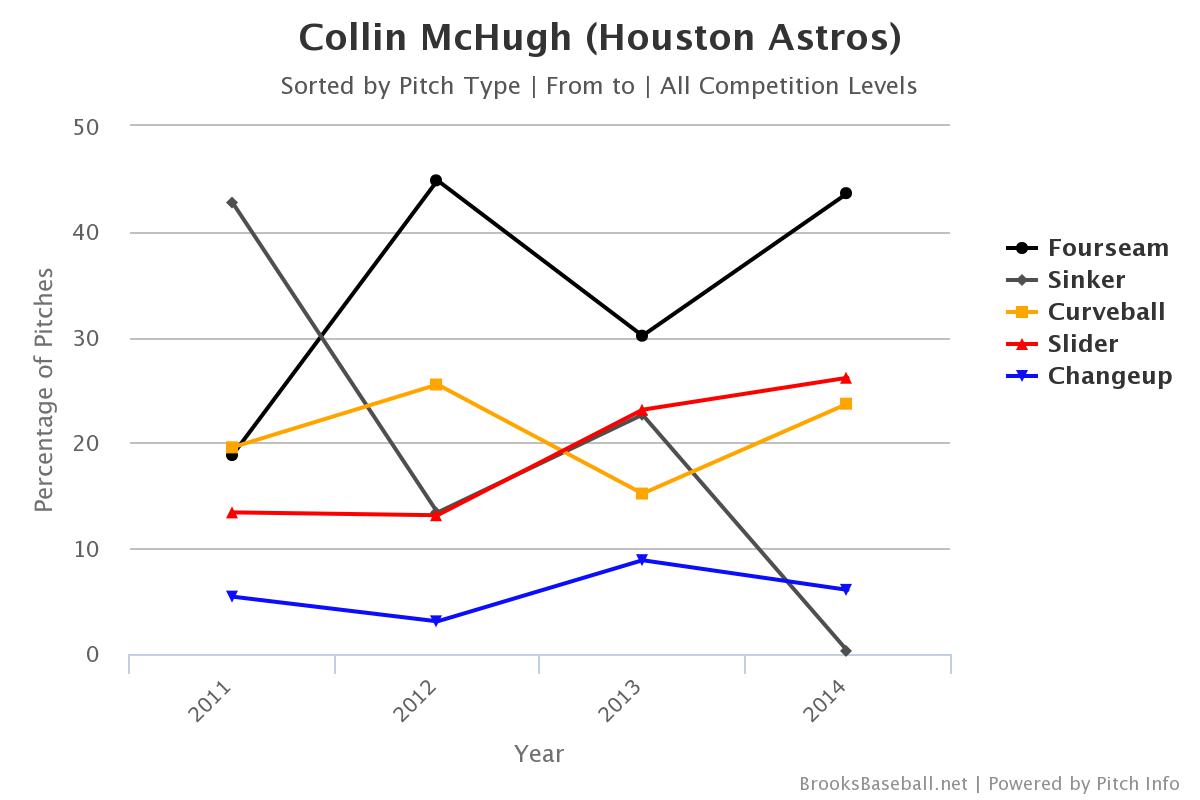 As we can see McHugh has all but ditched his sinker in favor of allocating the usage to all his other pitches with the exception of the changeup. Not only has his repertoire changed, but McHugh has added zip on his fastball. 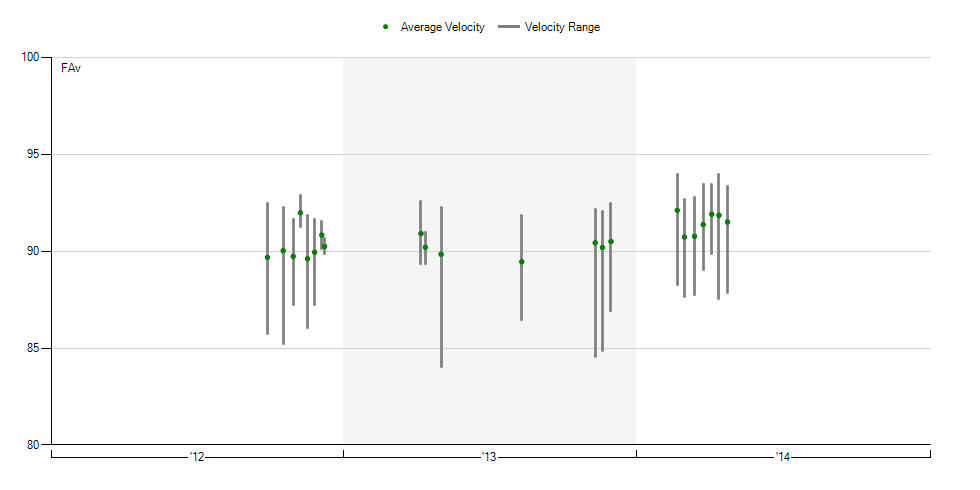 By changing up his repertoire and adding gas on his fastball, this has allowed McHugh to become more aggressive in the strike zone. He’s getting ahead of hitters with first pitch strikes at 62.4%, an increase of 8% since last year. Hitters are also making less contact with his pitches, a drop of nearly 20% outside the zone, 4% within the zone, and 8.6% overall as opposed to 2013. But most importantly McHugh is seeing a spike in swinging strikes. So much so that among pitchers with a minimum of 40 innings pitched he’s tied with Felix Hernandez for 9th place (12.1%) and ranks ahead of the likes of Max Scherzer, Corey Kluber, and Madison Bumgarner. So how exactly is McHugh getting these swinging strikes all of a sudden?

The answer lies with his curveball. As Carson Cistulli documented a few years ago, Mchugh’s curveball has always been a deadly weapon. Among pitchers that have thrown 100+ curves this season, McHugh ranks #1 in Whiff/Swings at 47.76%, a full two percentages ahead of Jose Fernandez, and five percent above the #3 slot Yordano Ventura. In terms of percentile, his curve is generating whiffs per swing at 36% above league average.

Outside of generating more swinging strikes there is one more aspect to discuss, and possibly the most important change McHugh as has made. This being his sudden drop in home runs, a drop from a horrid 2.09 HR/9 in 2012-13 to a measly 0.60 HR/9 this year. Pitchers can have great stuff, but it’s no good if they’re throwing it in hitters sweet spots. McHugh has always possessed good pitches, but command of those pitches has been suspect, till now, specifically versus right-handers. Using FanGraphs nifty new heatmaps we can see how McHugh has refined his craft. 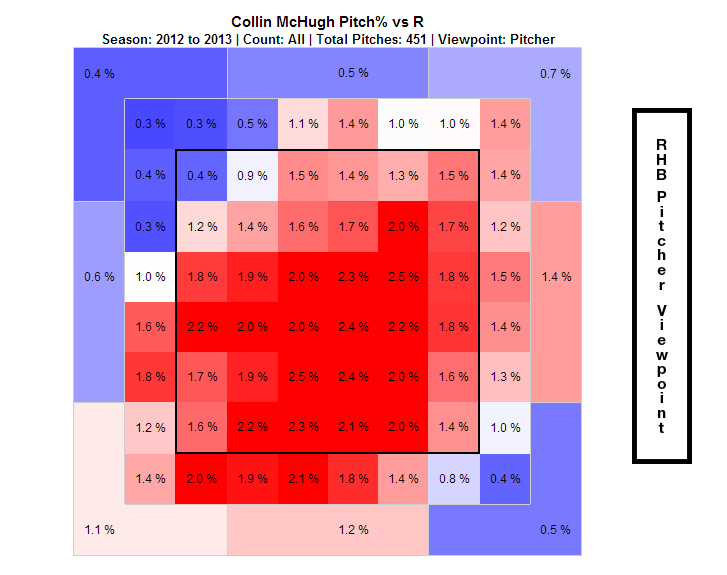 Here is McHugh this season: 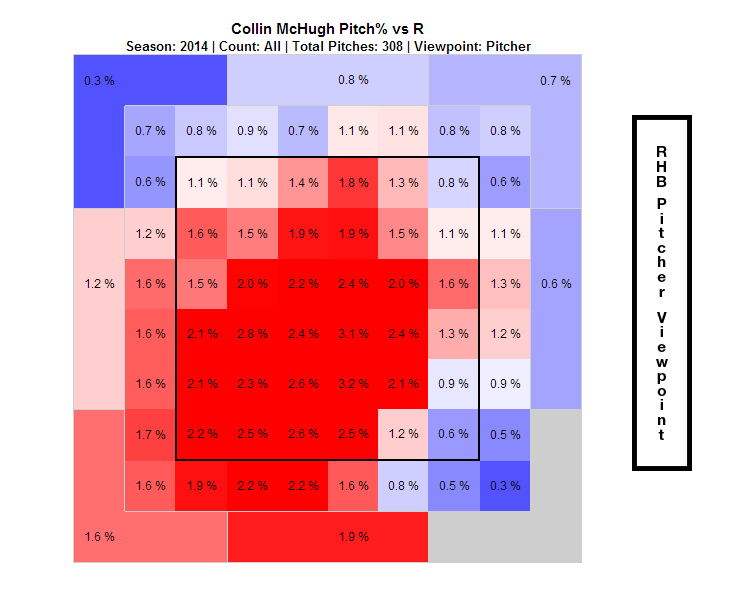 As we can McHugh has begun to stay out of the middle third of the plate, a hitter’s paradise, and shifted towards keeping his pitches down and away, a hitter’s nightmare. Quite simply McHugh has learned how to pitch. Before our eyes Collin McHugh has transformed himself from a mediocre minor league fodder into a real Major League pitcher. It remains to be seen if he can keep this up, but all indications are that he can. Collin McHugh has arrived as much as one can in 45 innings of work, that is.