While a less ominous diagnosis than what was originally hypothesized, Yordano Ventura's valgus extension overload (VEO) is nonetheless an injury to be taken seriously. We review VEO, commonly known as 'Pitcher's Elbow'.

News that Yordano Ventura's MRI results showed no ligament damage to the righthander's elbow evoked a collective sigh of relief from the Kansas City Royals as well as baseball fans, regardless of team allegiances, as the game potentially dodged yet another elbow injury sustained by a young and exciting pitcher. With Venura's complaints of lateral elbow pain in the face of reduced fastball velocity in his last start, prompting an early exit and immediate medical evaluation after only 74 pitches thrown, the worst was feared for the diminutive flamethrower. However, it appears that the Royals hurler should only miss a single start, with conservative treatments and rest being prescribed for a diagnosis of valgus extension overload (VEO)—Pitcher's Elbow.

An acronym that entails a number of injuries, it is a condition that arises from repetitive stresses put upon the elbow in overhead throwing in the presence of ulnar collateral ligament (UCL) insufficiency, with large amounts of valgus and extension overloads of the elbow experienced. VEO is the mechanism most responsible for injuries of the elbow in the throwing athlete. Valgus is defined as an outward twisting or turning of a bone or joint. The picture accompanying this article is a good example of an arm sustaining valgus forces, with the common 'laid back' position of the forearm arising from those forces also seen. Most often seen in the late cocking and acceleration phases of throwing, valgus forces can result large amounts of tension on the medial elbow, pulling the forearm bones away from the humerus (but prevented in doing so by the UCL), while the lateral side experiences large amounts of compressive forces, in particular, between the head of the radius and the capitellum of the humerus. Posteriorly, shear forces are experienced, especially in the olecranon.

This collection of forces are commonly at the root of a number of overhand throwing injuries, including ulnar neuritis, posterior impingement, osteophyte (bone spur) formation, flexor-pronator muscle strains, along with the aforementioned UCL laxity. From a biomechanical perspective, valgus forces generated during throwing can reach up to 64 Newton meters, roughly double the amount of force it takes to rupture the UCL. 500 newtons of force can be experienced at the lateral aspect of the elbow, or about 112 pounds, leading to the formation of the aforementioned bone spurs, often called 'kissing lesions'. From this develops the pain arising from extension of the elbow associated with VEO, typically experienced in the deceleration phase of a throw, although pain can be also experienced in the acceleration phase.

Regarding Ventura, much has been made of his small stature and the biomechanical forces required to generate the velocities and movement he does on his pitches and their role in not only the potential for injury, but also his ultimate role, be it starter or reliever. The requirements needed to produce the explosive results that a pitcher provides over 100 times in a game are immense, regardless of height or body type; the fact that Ventura is producing the results he does considering his height and frame invite questions as to how he generates the forces he does and how long he can sustain them before fatigue and breakdown might occur. With this in mind, we can explore another piece of PITCHf/x data beyond velocity that can help put the magnitude of these forces into perspective—spin rate.

The average fastball spins around at an average of 2200 revolutions per minute (RPM); the table below outlines the average spin rate on Ventura's fastballs, as well as his average velocity:

WIth Ventura's prodigious heat comes even more prodigious spin rates; large amounts of force generated by his arm, in particular, the wrist flexors and extensors, to go along with a good amount of forearm pronation and supination (depending upon the type of pitch thrown) all culminate in a pitch with a lot of bite. Add his top-20 horizontal and vertical pitch movements on each of his fastballs (per FanGraphs) to this velocity and spin rate data, and the notion that with every pitch, Ventura's elbow is at high risk for suffering the effects of VEO isn't far fetched, with concerns over his body type only adding fuel to the fires of concern that he is at increased risk for suffering an injury.

Taking these thoughts into consideration, let's look at some snapshots of Ventura's ability to generate high-octane pitches from a combination of spin rate and movement, across pitch type and inning; first spin rate and horizontal movement: 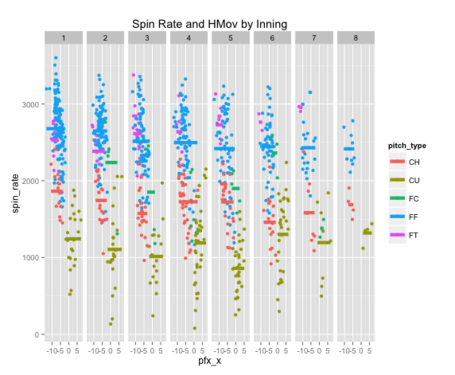 For reference, colored lines are the average spin rate for each pitch type in a given inning in this and the following plots. Here, we find that Ventura's spin rate, especially for his fourseamer (FF), shows some decrease as a function of inning pitched in conjunction with less movement, potentially showing an effect of fatigue. This effect is not as drastic in the cut fastball (FC) data or the changeup, but is nonetheless seen. 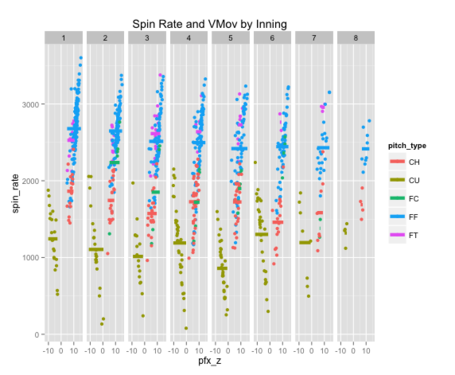 VMov data shows some of the same characteristics of the HMov data; however, FF data doesn't appear to suffer as dramatically from a movement perspective, but still exhibits a slow drop in spin rate as the game progresses. While showing some inconsistency across inning, Ventura's curveball appears to be somewhat stable with respect to the variables discussed.

Let's now visualize the data on a per-game basis, to see if there were any signs of potential fatigue of change in spin rate of pitch movement before Ventura's last start. First, HMov data: 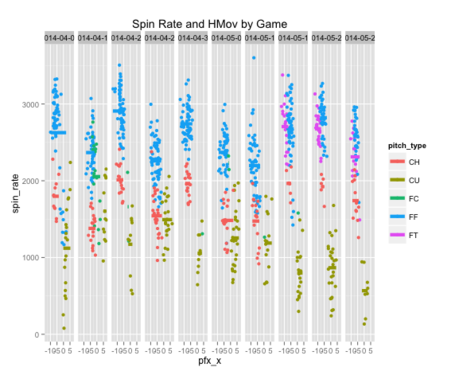 From the per-game perspective, we don't see much as it pertains to the fastball, which typically generates the greatest amount of force and potential for VEO symptoms—after a couple of starts with consistent decreased spin rates, Ventura had closer to normal spin rates his last two games prior to his injury, with a greater disparity between the fastballs and his curveball. Some movement on the fastball was lost in more recent games, with less variability seen in the variable. His curveball does show a gradual drop in average spin rate, equating to some loss in tilt.

How are things from a VMov perspective, game-to-game? 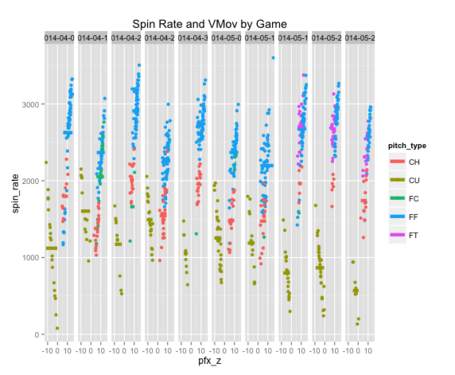 We again see the spin rate drop off in the curveball, coinciding with loss in movement. Fastball results show some inconsistent outcomes, but overall, the game Ventura sustained his injury looks an awful lot like his first outing of the season. Also of interest is Ventura's increased use of a two-seam fastball in place of his cutter in recent starts.

While Ventura's arm strength will never be doubted, his ability to endure the amounts of torque and force required to generate high-90's to triple digit heat for 3000+ pitches a season will be crucial to his ultimate fate and his long term health status. While the data shown did reveal a few subtle changes in spin rate and movement in some of his pitches over the course of his season that might trend with Ventura suffering from a fatigued arm, the addition of other variables, in particular, release point information, could provide improved insight into the injury. Even with these considerations, the pathophysiology of VEO is more consistent with his setback being sustained and aggravated over a considerable amount of time.