The secret behind the descent of Danny Salazar

Small sample sizes are fun. Occasionally, they can be revealing, as well.

Share All sharing options for: The secret behind the descent of Danny Salazar

Danny Salazar set the world on fire after an unexpected call up last season, allowing just 18 runs in 52 innings and striking out 65. This season, it seems more like he's been setting himself on fire, allowing 28 runs in 40.2 innings at the major league level before being demoted. Was last season's performance a flash in the pan? Did his candle simply burn out? Will I run out of flame metaphors?

The answer to those questions is: probably not. Salazar has thrown with less heat this season, with an average fourseam velocity that dipped almost 1.5 mph. But that doesn't seem like it could explain such a big swing in results. As in many baseball cases, when a player has outlier performances at opposite ends of a spectrum, the truth is almost definitely somewhere in the middle.

Per FIP, it doesn't look like Salazar was particularly lucky last season. It does look, however, like Salazar was particularly unlucky this season, with fly balls turning into home runs, given the difference between his 2014 FIP and his 2014 xFIP. The fact that Salazar's xFIP is so close to a (2013) league average rate is also a red flag that Salazar has been burned by luck this season. So what gives? With most of the other numbers more or less the same, it seems that a higher walk rate is largely responsible for Salazar's increase in xFIP from 2.75 to 3.79. And here's where it starts to get weird. 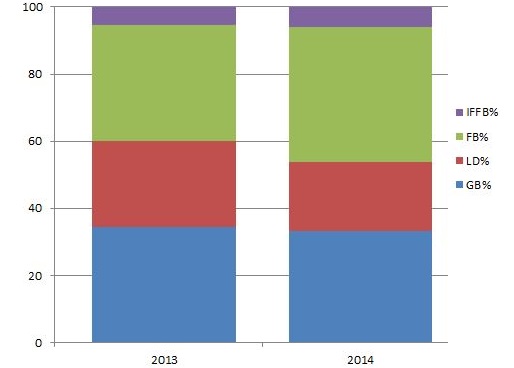 The increase in fly balls meant that although his 2014 HR/FB rate was essentially the same as his 2013 rate, he let up eight bombs in 40.2 innings, his HR/9 rose from 1.21 to 1.77. Although a lower line drive rate might suggest that hitters were having more trouble squaring him up, the increase in fly ball rate may be here to stay.

Batting average on balls in play

Like with fly balls and home run rates, it also seems from BABIP that Salazar has been unlucky this season. League-average BABIP has been .294 in both seasons, and while his .298 rate in 2013 was fairly normal, his .369 rate this season absolutely is not. There's some selection bias in that terrible pitchers are unlikely to qualify for the ERA title, but last year's worst qualifed pitchers per BABIP (Bud Norris, Joe Saunders, Doug Fister) had rates of just .333 or .332.

Add to that the fact that Salazar substantially lowered his line drive rate in 2014 and increased his fly ball rate, and the increase in BABIP becomes even more curious. If we expected a BABIP of 70% for line drives, 20% for ground balls, and 12% for fly balls, we'd expect a .265 BABIP for Salazar in 2014. That's somewhat lower than league average, not extremely higher. A difference this extreme is almost definitely a combination of something real and something luck. The luck is unlikely to continue, but it appears from the small 2014 sample that hitters were able to square up Salazar's pitches more frequently. Another reason to suspect that hitters actually were able to square Salazar's pitches up more frequently in 2014: it's easier to square up in-zone pitches.

Combine this average zone rate with a relatively high swing rate at pitches outside the zone (38.2% per BIS, 35.8% per Pitchf/x), and it should come as no surprise that a high percentage of Salazar's strikes that season came from swings and misses. His 14.6% SwStr% would have blown away the field in 2013 if he had qualified for the ERA title; Yu Darvish (12.6%) and Matt Harvey (12.5%) had little on Salazar.

The problem is that batters wised up. Salazar kept throwing balls at a high rate, but batters stopped swinging at them as frequently. From 2013 to 2014, Salazar's O-Swing% dropped precipitously. Here are Salazar's plate discipline numbers from BIS:

Hitters weren't getting fooled the same way. They were still getting fooled (25.5% K%), but on their terms, not Salazar's. Check out his swing rates, from Brooks Baseball:

Off the plate horizontally, not much appears to have changed; hitters never really swung at those pitches in 2013, and they continued to lay off in 2014. But look at above and below the zone, in particular. In the three blocks directly below the strike zone, swing percentage dropped from 53% in 2013 to 44% in 2014. Swing rates for the three blocks above the zone dropped even more precipitously, from 48% in 2013 to just 27% in 2014.

Note that while Salazar's SwStr% rate dropped quite a bit from 2013 to 2014, it was still good in 2014: his 10.6% rate would have tied for 14th among last season's 81 qualified pitchers. Still, the higher-than-average SwStr% may be the product of pitching outside the zone at a clip at which he just can't be successful, and it's clear that hitters stopped swinging outside the zone in general. What happens when you combine a high percentage of pitches outside the zone with a low O-Swing%? A high walk rate, that's what (9.2 BB% in 2014, up from 7.1% in 2013).

I don't have too much to add about sequencing, exactly, other than to note that Salazar's first strike percentage took a big dive in 2014 (from 67.3% to 57.1%, per BIS). That's at least partly a function of hitters swinging less frequently at pitches out of the zone, but not completely. As one of the few things that changed from one season to the next in a significant way, one wonders if the Cleveland Indians should stress first pitch strikes while Salazar is in Triple A.

Selection is another matter, however. In his eight starts this season, Salazar kept his fourseam fastball percentage more or less the same, but threw more sinkers, at the expense of his slider and splitter. Again from Brooks Baseball:

Part of why this is troubling is that it was Salazar's sliders and splits that produced the swings and misses at the highest rates:

In fact, although batters were hitless against the sinker in 2013, they hit it at a blistering pace in 2014. Meanwhile, batting average against for his fourseam went way up:

Throwing the sinker may have been meant as a solution before it itself became a bigger problem; he didn't throw any in his first two games this season, but relied on them heavily thereafter. In terms of results, however, the sinker has done extremely poorly. It seems to provide a very limited contrast to his fourseamer. Average velocity for the two pitches this season have been very similar (95.41 mph for the fourseam, 94.62 for the sinker), and the difference in vertical movement has been fairly small (9.92 inches for the fourseam, 7.5 for the sinker). Taking into account that the less-used split had been Salazar's main change-of-pace pitch, I wonder if increased use of the sinker is also at least partly responsible for hitters' increased success with the fourseam.

But as we've seen, Salazar's 2013 success and 2014 struggles may have much to do with pitches above or below the zone. Relying less on the split, in particular, could have been part of what changed that -- especially if the sinker just isn't working.

Maybe the slider and split have been effective for Salazar precisely because he doesn't throw them very frequently. But he did well with them last year, and in piecing together the puzzle of how to get Salazar back on track, one wonders if the Indians could have him try to throw both pitches a bit more frequently. At any rate, it looks like the sinker could be shelved.

Where to go from here

Something extreme is going on with the dumpster fire that has been Danny Salazar's 2014 season. It looks like the story of Salazar's day-then-night transformation is partly explainable by declining stuff, partly by pitch selection, and partly by luck. Salazar can't (or shouldn't) will an extra mph or two on his fourseam fastball, and it may be that his fourseamer won't ever be as effective as it was last season. But pitch selection is something that Salazar and the Indians can control, and to the extent that his struggles are luck, all the team can do is keep putting him on the mound.

Maybe Salazar has been tipping his pitches, or maybe it's just that by increasing his total percentage of fastballs (fourseam and sinker) all the way to 75.6%, he's become too predictable. Maybe, given the very small size of the samples, we can blame Salazar's struggles on an obscene and unexpected surge in BABIP. But it seems like there are only two things that Salazar can control.

The first is pitch selection. A return to using sliders and splits over 30% of the time could help restore some of the outside-the-zone swing-and-miss to his game. The second is location. If Salazar simply can't throw sliders and splits that much, or if he does and hitters continue to lay off, he's going to have to try pitching in the zone a bit more often.