Carlos Santana struggles: How did we not see this coming?

Carlos Santana is following an abysmal April with a lousy May. Is change on the horizon in June? July? August? September? All we can do is hope, and provide descriptive statistical analysis.

Share All sharing options for: Carlos Santana struggles: How did we not see this coming?

Coming into the 2014 season, the hype surrounding Carlos Santana was prevalent, but potentially exaggerated. The consensus around the sabermetric industry was consistent: Santana would benefit tremendously from the switch to third base, as it would decrease the physical demand on his body and increase his number of plate appearances. Going into his age 27 season, Santana was primed to become an elite talent in MLB, and the face of the franchise. Unfortunately, as the month May is concluding, our discussion of Santana’s 2014 performance is an attempt to analyze why he has failed to meet expectations. Thus, this analysis will provide insight into Carlos Santana’s struggles from an offensive perspective. For the readers who own him in fantasy-- you have my sympathy.

Through the 47 games that Carlos Santana has played this season (all stats entering May 24), he has encountered several streaks no baseball player would be proud of. He was hitless in four consecutive games twice, and five onsecutive games once. In fact, Santana was a 1 for 4 game away from having an 8 game hitless streak, twice. Where did this lack of production come from? At this point in the season we are happy to see Santana simply make contact with a baseball, and proceed to reach base safely. This realization is far from what we expected a little under two months ago. Santana has always prioritized his power versus his contact%, but a batting average flirting with .150 is unacceptable at the major league level./p>

Here are the top reasons for Carlos Santana’s offensive disturbances in 2014:

Independent of all other factors, Santana’s batted ball numbers are uncharacteristic of his playing style. For a proven power hitter with a well above average career ISO, his GB% (48.8) is significantly higher than normal. Perhaps the leading indicator for his performance this season his career low line drive rate (12%). Previous research has proven that LD% has a very low year to year correlation, so initial reasons for Santana’s reduced line drive rate can be attributed to the naturally large variance associated with the statistic. Nevertheless, LD% can describe a given player’s performance thus far, so it supports his depreciated hitting value. It is no secret that a significant contribution to Carlos Santana’s success is his ability to drive the ball, and that simply is happening far less often at the beginning of the 2014 season.

To illustrate, I provided Santana’s spray charts by hit type for 2014, and 2013 (through the same date in the season). 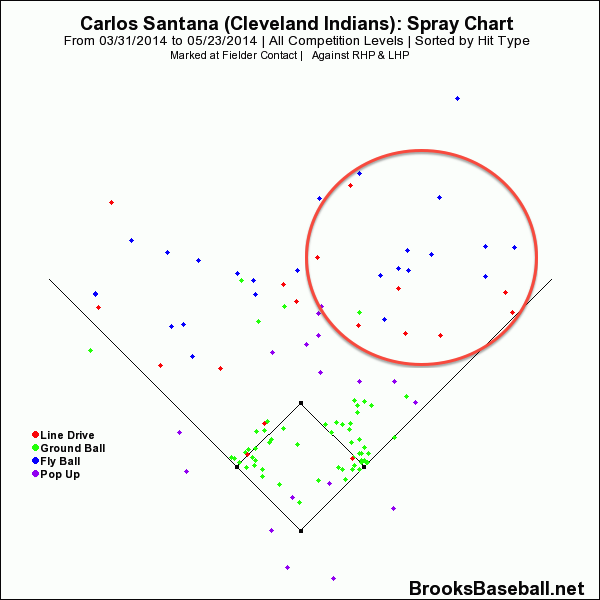 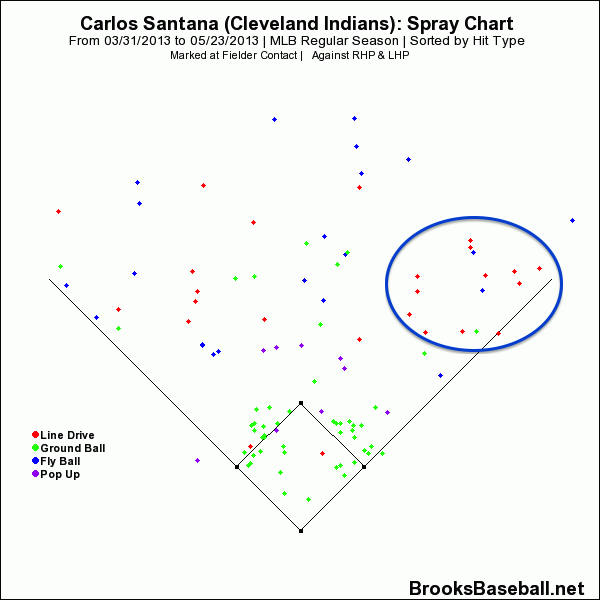 The area of elevated importance indicated by the corresponding circles for the respective seasons is where we direct our attention. Notice through May 23rd in 2013, Santana not only demonstrated an ability to hit line drives at a higher frequency, but he was actually able to locate these batted balls in a smaller portion of the outfield. Maybe he was more comfortable against the pitching he faced last season, but this provides supporting evidence for his ability to consistently drive the ball where the outfielders were not positioned. I will leave it for a potential conversation in the comments section regarding the possibility that teams are playing a different shift against Santana in 2014.

If we have learned anything about Santana’s 2014 campaign to date, his plate discipline has remained steady and reliable. He ranks 2nd in BB, 8th in O-Swing%, but still can not crack the top 30 in OBP. Therefore, Santana’s selective approach at the plate has helped him generate walks, but hindered his understanding of the strike zone. At first glance, Santana has "literally" seen his strikeout-looking percentage (yes, the dreadful backwards K) increase by a full 10 percent (currently at 30.2% in 207 PA). In fact, Santana struck out looking a total of 23 times in 2013; however, 2014 has been a different story as he has already struck out looking 13 times (well on pace to surpass his total from just a year ago). Thus, Santana’s old tricks are not working in 2014. Pitchers are making more effective pitches against him in two strike counts, and he has yet to adjust his hitting approach.

To illustrate, take a look at his batting average in corresponding pitch counts: 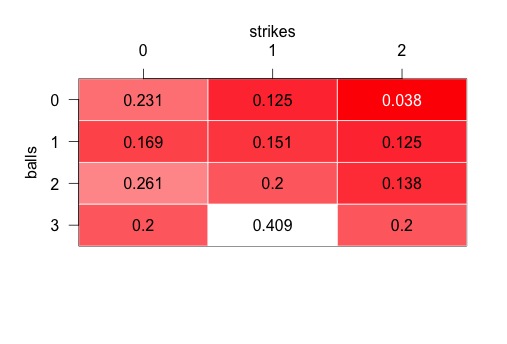 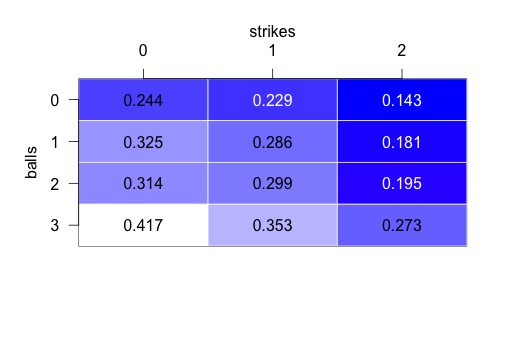 What is Santana doing wrong? Well, his eye on offspeed pitches alone might be enough to yield a verdict. There have been 952 pitches thrown to Santana this season and 463 of those pitches were offspeed. The strategy of the opposing pitchers is obvious, and exploited accordingly. For example, Santana’s conditional probability that he will whiff on a changeup given he swings is 41.03% (at least a 6% greater chance than any other pitch), so pitchers have thrown him changeups in two strike counts at a rate of 13%. Bottom line, two months into the 2014 season Carlos Santana does not stand a chance against any major league pitcher who can effectively change speeds within the strike zone. Expect more of the same going forward. I am not forecasting any significant turnaround for the tribe’s switch hitting third baseman.

To conclude how poorly Carlos Santana has performed to date in 2014, I analyzed his overall contribution to the Cleveland Indians through the Win Probability Added (WPA) statistic. His battle to bat over .150 this season is at the forefront of the team's struggles, but just how badly has he effected the Indians’ outcome as a result? Given we are considering Santana’s value to the team to be not only the amount of runs he generates, but also the in-game situation where these runs occur (based on the rationale that a run in the 9th inning is more valuable than a run in the 1st inning). That being said, I investigated Santana’s WPA on a game by game basis.

Through 47 games this season, Santana is sporting a mediocre -0.23 overall WPA. To further display how his lack of production is handicapping his team, I constructed multiple graphs to show his game by game WPA in 2014, along with similar graphs for the 2013 and 2012 seasons through May 23rd in each respective year. 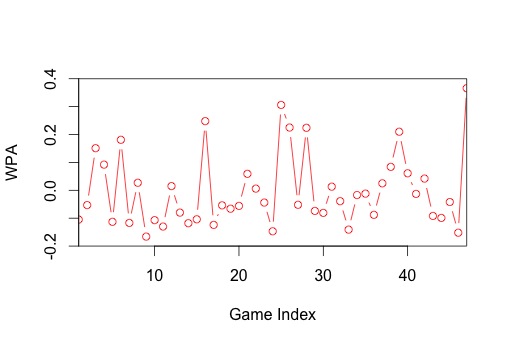 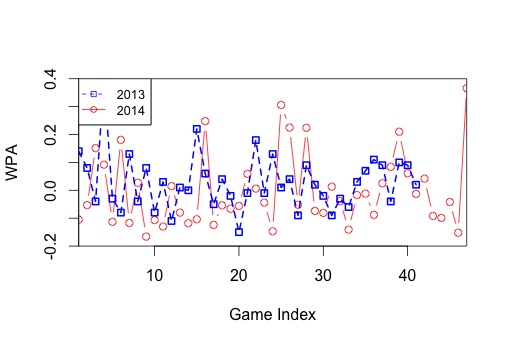 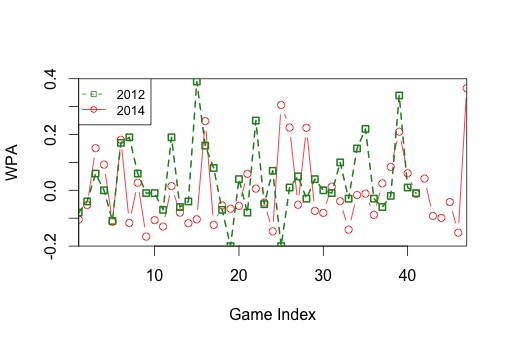 A visual interpretation of these graphs certainly indicates a dropoff in Santana's contributions to the Indians. Through May 23rd in each respective year, it is clear that production in 2014 for Santana is down from years past. It is also worth mentioning the increased games played in 2014 with respect to the previous two seasons. Nonetheless, Santana has yet to prove the move the third base was worthwhile. We can further observe Santana's WPA numerically:

Table 1: Numerical Summary of Carlos Santana's WPA through May 23rd in each Respective Season

It is indisputable that Santana's WPA for the Indians is in a downward trend. His young, dismal 2014 season has witnessed a negative WPA through 47 games. His negative WPA provides an explanation for his lackluster performance this season. Since WPA is a counting statistic, a given player must have a long string of consecutively poor games to achieve such a low figure. Consequently, Carlos Santana has crippled his team thus far in the spring of '14.

Michael Nestel is a contributor to Beyond The Box Score.