Neal Cotts' career is like a microcosm of the nature of relievers in general. Let's take a walk through his career.

Share All sharing options for: Neal Cotts and analyzing relievers

I don't write about relievers very much. Or at all, really. They're an unpredictable sort. The new hotness of one reliever this year becomes the old hotness next year, unless the hotness is named Craig Kimbrel. Relievers come out of nowhere and return to nowhere. Nevertheless, today, I will write about relievers.

Out of pure curiosity to explore a tool that I haven't explored much, I decided to view the leaderboards on FanGraphs of relievers over the past calendar year. Some expected names show up on that leaderboard: Koji Uehara, Greg Holland, Craig Kimbrel, and Kenley Jansen comprise the elite of relievers, and they are the top four. There are other names I'd heard of lower down the list like Glen Perkins and Mark Melancon. However, Neal Cotts ranked 12th on this leaderboard as of Sunday evening. I had never really heard much about Neal Cotts.

Cotts is a 34 year old lefty who relieves the Texas Rangers' injury-plagued starting staff, and he's a perfect example of the "coming out of nowhere" phenomenon. Before the Rangers, Cotts was a member of the White Sox and Cubs from 2003-2009. He had one good season in 2005, but his performance during those years was otherwise forgettable. Then, there were some years (2010 and 2011) in which Cotts appeared not to have thrown a pitch at all, anywhere. To be sure, this was the result of a slew of injuries, including Tommy John surgery and some hip surgeries. However, he returned after those injuries in 2013 and has performed admirably since then.

You see how difficult this is, right? How are we supposed to analyze a player with such volatile performance and small samples? Forging ahead, after Cotts regained some measure of health, he came back in 2013 and not only struck out a bunch of guys, but he also limited the walks! His K-BB% was at its height last year. He also limited home runs. This year, he's walking guys slightly more again and striking out fewer guys, but he's still striking out a decent amount of hitters and limiting home runs. How has he achieved that success?

Prince Fielder's season has been cut short due to a disc herniation in his neck, prompting surgery. Here, we discuss what does injury entails.

Well, he's basically a 4seam/cutter guy whose cutter seems to confuse the various sources of pitch classification. Is it a cutter? A slider? A [inappropriate name removed]? Whatever it is, it's a pretty good pitch for him. He can throw it for strikes 70% of the time and gets a fair percentage of whiffs with it. He's also started to use it a lot more after the injuries. He likes to throw it to a certain part of the plate and can command the pitch there, which is good for generating grounders. 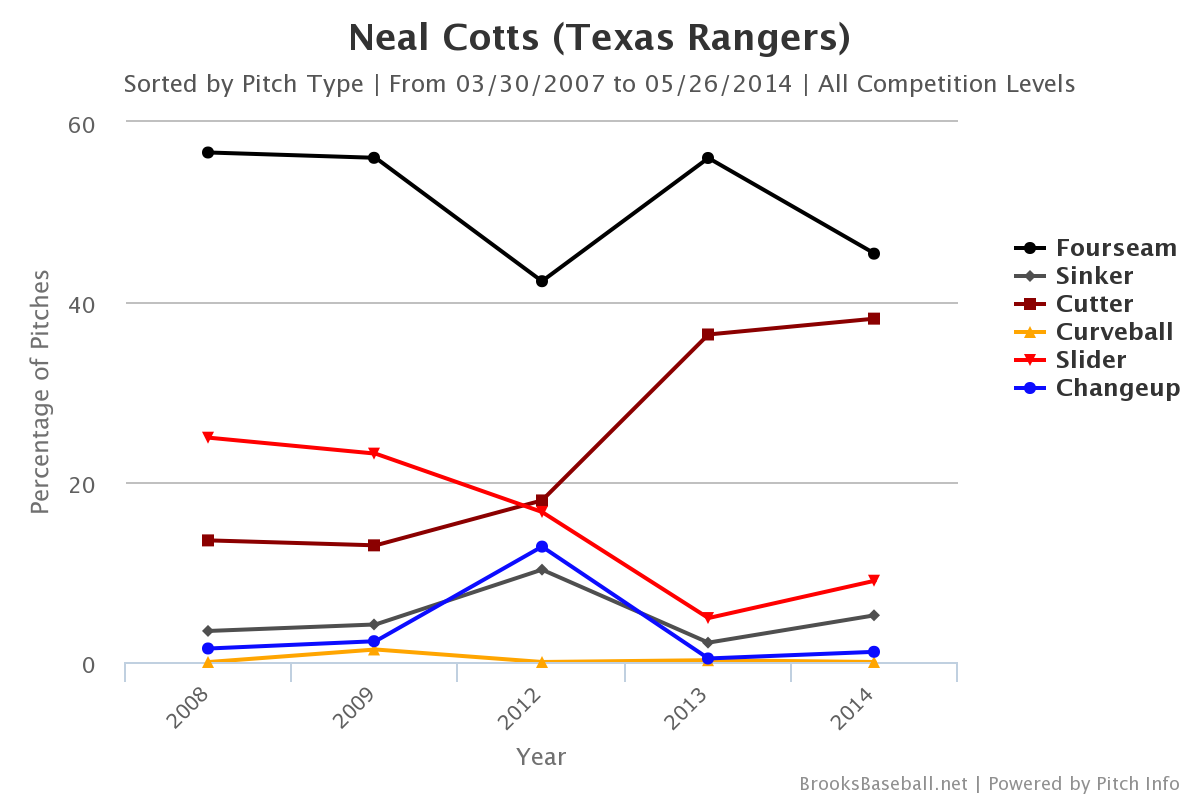 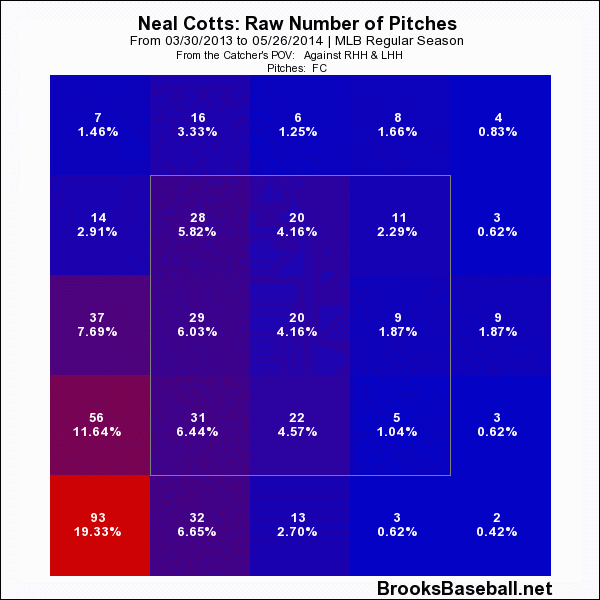 Cotts will be a free agent at year's end and stands to get an okay contract (for a reliever, of course). He's no LOOGY; in fact, lefties tend to hit him harder than righties it seems. I wouldn't put much stock into that, though. Remember, he's a reliever, and relievers are impossible to predict.

Kevin Ruprecht is a Featured Writer for Beyond the Box Score. He also writes at Royals Review. You can follow him on Twitter at @KevinRuprecht.