Prince Fielder's season has been cut short due to a disc herniation in his neck, prompting surgery. Here, we discuss what does injury entails.

Share All sharing options for: Prince Fielder's pain in the neck

With news of pending spinal fusion surgery, it appears Prince Fielder's inaugural season as a Texas Ranger has come to an abrupt end. An appointment for a second opinion has been made, and appears to be the last roadblock between Fielder and a date Tuesday with an orthopedic surgeon to fuse the C5 and C6 cervical vertebrae; a discectomy to relieve the pressure on the C6 nerve root (which exits the spinal canal between C5 and C6) and the underlying radiculopathy can also be expected to be performed as well. This comes after the first baseman undergoing medical examination and treatment that included corticosteroids as well as a regional nerve block to alleviate the neck issues that have bothered him for most, in not all, of the season. Fielder's injury and pending stint on the disabled list will make him the 17th Ranger to be put on the shelf this season, a stunning number of players and games lost due to injury.

For Fielder, it is the (likely) end to a disappointing season that saw him perform at a .305 wOBA, 85 wRC+ level, far below his .386 wOBA, 139 wRC+ career averages, but one with a resolution—albeit an austere one in many respects—that should have him returning to the game next season, pain and soreness free and at full strength.

Symptomatically, Fielder's complaints of left arm weakness and soreness are common ones seen in cases of C6 nerve root radiculopathy, with weakness arising from elbow flexion and wrist extension common for the nerve level. Numbness and tingling and often pain can radiate down outside of the arm to the dorsal side of the thumb and index finder of the hand of the affected side. Anatomically, the C6 nerve root is an important one with respect to the upper limb, as it is one of five nerve roots that form the brachial plexus, while also forming the median nerve distally. Its branches supply neural stimulation to a number of muscles of the upper body, including the aforementioned biceps, wrist extensors, as well as the muscles that comprise the rotator cuff of the shoulder, sharing these duties with the C5 nerve root branches.

With this in mind, let's discuss the ramifications of the effects C6 radiculopathy has on Fielder, focusing on elbow flexion and wrist extension. Considering Fielder is a first baseman, and throwing is not at a premium, most of the performance-sapping arising from the herniated disc will be seen at the plate. Despite being a righthanded thrower, Fielder hits lefty, which in some respects has helped him with the location of his injury, as the lead arm and shoulder of a hitter play a significant role in force generation and acceleration of the swing. The lead arm biceps also provide stabilization of the elbow and the bat while in the batting stance, while acting as an antagonist to the triceps as they contract when a swing occurs.

While many of the same functions occur with the back arm (the left arm for Fielder) in terms of stabilization of the elbow and bat pre-swing, the role of the back arm and the biceps are more as a guide with full extension of the back arm, allowing for the bat path to go fully through the hitting zone and preventing much pulling off of the ball seen arising from suboptimal back arm extension. T

he biceps of the back arm is also important in establishing and maintaining where a batters hands lie pre-swing, be it around the letters of the jersey, or up around the back ear. The wrist extensors are important not only in assisting in holding the bat in the hands, but also in the loading phase, providing wrist deviation as the hands go from the loading phase to acceleration. As with the biceps, the extensors also assist in keeping the bat stabilized while in the pre-swing phase.

What problems could Fielder have suffered from C6 radiculopathy? Aside from the pain from turning his neck towards the pitcher to see the ball, biceps and wrist extensor weakness could show up in his hitting stance, before even swinging the bat, in the form of lower set hands due to an inability to keep the bat around or above the shoulders for an extended period of time. In terms of the swing, issues with rolling over pitches both due to not being able to grip the bat at full strength as well as back arm biceps weakness causing him to get around pitches could be also be an issue arising from the neck issue.

Looking at Fielder's hit spray charts for 2014 and his career, we do see a subtle tendency to pull the ball more this year compared to his career overall. 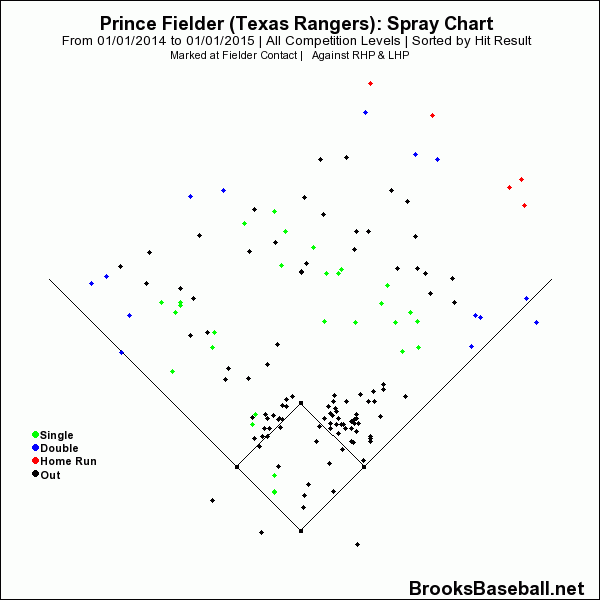 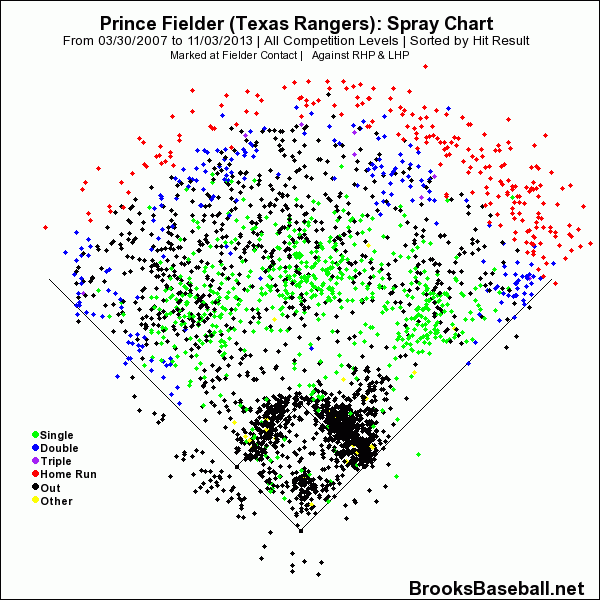 One last graphic, this one looking at Fielder's career ground balls per ball in play rate up to 2014 (left) to this season (right):

This season, Fielder does exhibit a little more of a tendency to hit grounders, especially with pitches on the inside half, which is consistent with a weak back arm (biceps and wrist extensors, in particular) limiting Fielder's swing in the zone, crating more opportunities to roll over pitches and hit them into the ground.

In the end, Fielder's neck woes are being handled and should be fully resolved with surgery; 95 to 98 percent of cervical procedures are successful, as measured by relief of arm pain. This will require the use of some hardware that will permanently anchor his C5 and C6 vertebrae together. While this shouldn't affect him at the plate moving forward, the small chance of reduced mobility arising from the fusion would more than likely become exacerbated while playing in the field, since the ability to extend the head to look up could be compromised. Even in this worst case scenario, a single level fusion, especially at the C5/C6 level, should not significantly affect Fielder's neck range of motion post-operatively and will have Fielder back to his slugging ways come next season.