The pluses and minuses of strikeouts

Strikeouts are again on the rise in major league baseball this season. Which teams are handling the trend the best?

Share All sharing options for: The pluses and minuses of strikeouts

You have probably heard of the rise in strikeouts in Major League Baseball. Strikeouts have been going up for the last decade. Hitters seem to have realized that a strikeout is not more costly than any other type of out, and can be less costly in certain situations (e.g., avoiding a double play). Trying to hit the ball to the moon will come with strikeouts but it will also come with home runs and teams can live with that exchange. Yet, some have suggested that the strikeout rate is too high.

Here is a look at the trend in league strikeout rate for starters and relievers for the last twelve years: 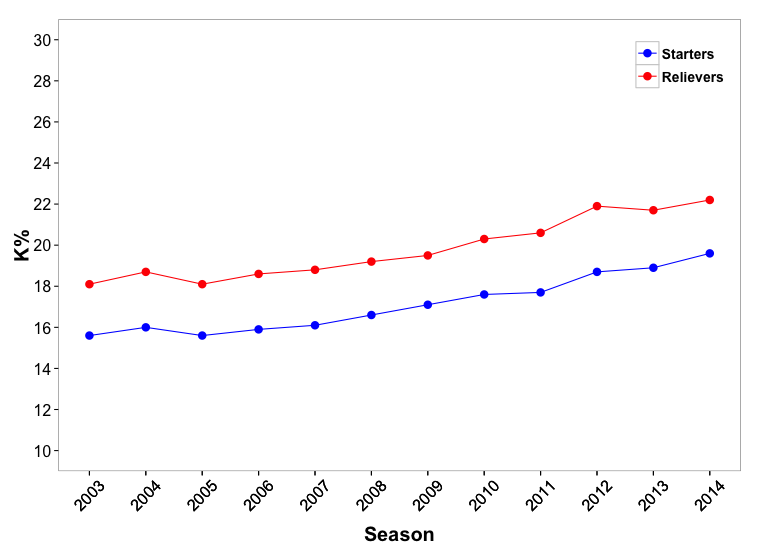 Chris Moran •Beyond the Box Score

The trend is evident. I am not the first person to show this, nor will I be the last. Thus far in 2014, starters are striking out 19.6% of the batters they face, and relievers are at 22.2%. So, when watching a game, about 1 in 5 batters will be retired via strikeout. Interestingly, this issue is not entirely a plate discipline issue, as walk rate (BB%) has remained pretty consistent over the same time frame: 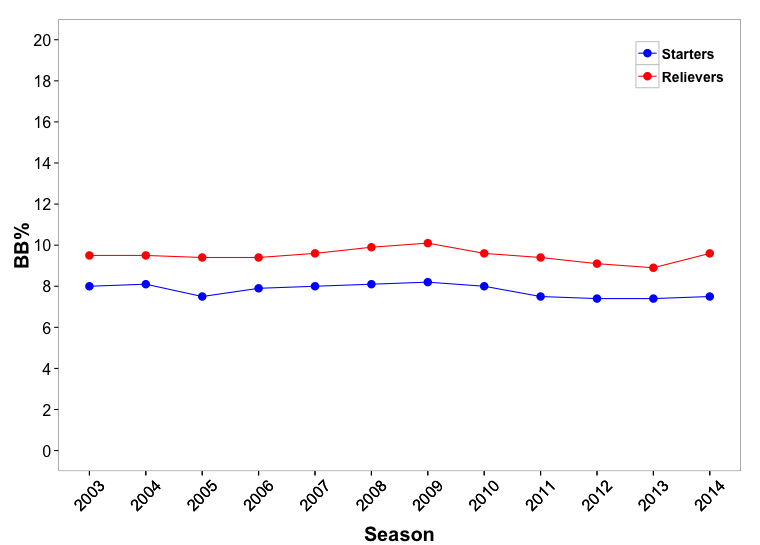 We have an interesting situation here. Players are striking out more often, but walking at about the same rate. Teams that can take advantage of the strikeout on defense while avoiding the strikeout on offense should be successful. Which teams are the best at this? And how does it relate to winning?

On defense strikeouts are good and walks are bad. The opposite is true on offense. So a positive PlusMinus indicates that a team is on the right side of the strikeout epidemic. A similar analysis was carried out here, a month ago.

Here are the results for the 2014 season thus far:

Strikeouts are up but the single game record holds

Neil Weinberg •Beyond the Box Score

Why aren't there more 20K games

Jeffrey Long •Beyond the Box Score

This simple comparison separates the stronger teams from the weaker teams quite well. Teams on the positive side include the Athletics, Tigers, Cardinals, Nationals, while on the negative side we have the Cubs, Twins, Astros, and White Sox. The White Sox really do not fare well with this comparison. Correlating PlusMinus with winning percentage reveals a modest positive correlation (r = 0.35). Only a small proportion of the variance in winning can be accounted for with this comparison. This is understandable given that the comparison overlooks many factors of offensive and defensive success. It is also only based on ~42 games. Expanding the sample to include all team data for seasons from 2003-2014 reveals a much stronger relationship (r = 0.64).

It remains to be seen how this trend in strikeouts will continue. It is unlikely that it will keep rising and rising over the next few seasons. Having pitchers that strike batters out will continue to be valuable but I suspect that teams will invest more in players that excel at making contact in order to counteract all the striking out. Teams at the top of the Contact% leaderboard for this season are many of those that are leading in the PlusMinus comparison given here. While this presents a bit of a chicken-egg problem, it could be some initial evidence supporting my suggestion. We will have to wait and see how this plays out for the rest of this season, and over the next few seasons. Regardless, teams should take note that being on the positive side of striking out contributes (at least a little bit) to winning.