Former starters often make the transition to the bullpen and succeed. Occasionally these relievers used to be top prospects, or even guys who saw success at the Major League level as a starter. Dellin Betances is another example of a top prospect that many thought was all but washed up, only to turn around and blow us away as an ace reliever.

Several young pitchers are making their names as relievers this season despite being a top prospect because of their potential as a starter. Even Mariano Rivera was once a starter.  Zach Britton, Wade Davis, Dellin Betances, Brett Cecil, Randall Delgado; these are just some of the names that once lived on prospect lists before ultimately finding homes in the bullpen. All of those pitchers are in the top 11 for strikeout rate this year among relievers (with the exception of Britton who leads all relievers in GB%).

Dellin Betances is just one of these pitchers, but he's a fascinating case study in how one goes from top prospect to bullpen arm. Jason Collette recently wrote about Wade Davis, a former AL East starter who has excelled as an arm at the back end of Kansas City's bullpen. His look at Davis' evolution from MLB starter to dominant reliever piqued my interest in Betances, who was once hailed as a saving grace by Yankees fans.

In 2011 Keith Law ranked Betances #73 in his top 100 prospects, mentioning that he had a very inconsistent curveball to go along with a fastball that sat in the mid 90s. The following year Law ranked him as the 83rd best prospect in all of baseball. Law hinted at Betances ultimate role in his profile:

At 6-foot-8, 260 pounds, Betances is huge, throws hard and has a history of missing bats since coming back from Tommy John surgery. But there's still a strong sentiment among pro scouts that he ends up in the bullpen long-term because of command questions. He'll pitch in the low 90s but runs it up to 97 mph and would likely sit 94-97, if not better, in relief. The curveball remains wildly inconsistent, with outings when he doesn't have it at all and outings when it looks like an above-average pitch.

As an O's fan I was often subjected to listening to Yankees fans wax poetic about how the "Killer B's" were going to set the baseball world on fire upon their callups to the big league club. While Brackman fizzled and Banuelos is being stymied by continued control issues, Betances is showing promise in the relief role that Law said might be a fit for him all along. No fan wants their top rated pitching prospect to become a bullpen arm (as an O's fan I saw Johnson, Berken, Bergesen, Matusz, Arrieta, Hunter, and Britton all move from the rotation to the 'pen at one point or another), but it's often a necessity given the difficulty of developing top notch pitching talent.

Betances has made the transition from starter to reliever seamlessly, becoming one of Major League Baseball's best relief pitchers in the process.

Control issues made starting a serious hurdle for Betances. His lack of success with a third (changeup) or fourth (sinker) pitch also limited his ability to succeed as a starter against better competition. One of the biggest hurdles for young pitching prospects is that they will need to develop a third pitch in order to succeed at the MLB level. For a starter and go through lineups multiple times, they need multiple offspeed pitches that allow him to pitch effectively to hitters from both sides of the plate. Often this comes in the form of a changeup, as most pitchers (like Betances) have a breaking ball to go along with their fastball of choice.

For relievers this is less of an issue, as exhibited by the fact that Betances has yet to throw anything other than a fastball or curve so far this season.

Betances has thrown 399 pitches so far with roughly 56% of those (225 pitches) being fastballs and the remainder (174) curves. Betances is averaging nearly 97 mph with his fastball (96.74 mph) with the curve coming in significantly slower at 83.63 mph on average.

The curveball has always been a huge asset for him, and so far this season opposing hitters have a .063 batting average against the pitch. Opposing hitters aren't slugging much better either, posting just a .104 SLG against Betances curve.

When it comes to approach, Betances basically falls into the pattern for which you'd teach a young hitter to look. When ahead he throws more curveballs, and when behind he throws more fastballs. He also hasn't seemed to change his approach much at all depending on the handedness of the batter, simply daring them to hit his best stuff. The chart below breaks down the pitch usage for Betances' fastball and curveball in various situations: 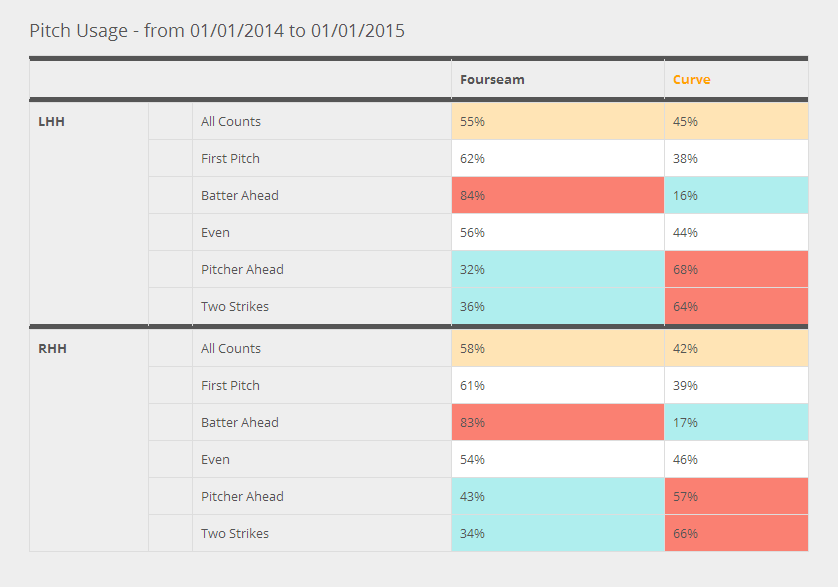 The other thing that's making Betances so difficult to hit is that his control issues of the past are no longer troubling him. Throughout the upper levels of the minors Betances regularly put up walk rates above 4 or 5 per 9 innings, which makes his job that much more difficult. So far this season though Betances has upped his strikeout rate to more than 15.50 K/9 while also lowering his walk rate to just 3.33 BB/9. Granted, it's only been 24.1 IP so far, but Betances has shown that he is more willing to pound the zone as his fastball sits in the high 90s and his curve is a gnarly unhittable hammer that he routinely drops on opposing hitters.

Some are already anointing Betances as the heir-apparent to Mariano Rivera's closer role in the Bronx. While David Robertson might have something to say about that, Betances certainly has the dominant stuff we've seen from other successful closers in MLB like Craig Kimbrel or Kenley Jansen.

That right there might be the key. Betances was always an intriguing prospect, but must have had the foresight to think that he would deserve to be mentioned in the same sentence as those two ace closers. The fact is that Betances' fastball-curveball combination is among the best in the league. He may not be a starting pitcher, or the complete fulfillment of all the promise he had as a former top prospect. Instead, he's simply one of the best relief pitchers in baseball.

Jeff Long is a writer at Beyond The Box Score and Baltimore Sports and Life. You can follow him on Twitter at@BSLJeffLong.