The Mets are off to a surprisingly good start in the standings. It isn't because of their bats.

Share All sharing options for: Winning with silent bats

One, we don't focus much on overall team play. We pay such careful attention to the esoteric, the proverbial stones uncovered, or the signal in the noise, that sometimes the big picture gets overlooked. Second, we don't often write about our favorite teams, or the teams we know the best. And that is because we like to consider ourselves unbiased writers. We don't want to let our personal admiration color our commentary.

That being said, I am going to take a chance and do the two things we don't do often. I am going to write about a team's overall play, the Mets, who also happen to be my favorite team.

The Mets are off to a surprisingly good start. Heading into their game with the Rockies on Thursday, they held a 15-11 record, good for fourth best in the National League. For a team that was ridiculed in March for their general manager setting a lofty 90 win goal, a strong April was needed. Their 15 wins in the month marked the most for the franchise since 2007. Impressive, considering they started the season 0-3, making them 15-8 since the Nats opening series sweep.

What makes the Mets strong start most surprising is how they have done it. They rank 28th in batting average, 25th in on-base percentage, 30th in slugging, 27th in home runs, fifth worst in strikeout percentage, 29th in wRC+, and just for fun, their pitchers are 0-42 at the plate. In other words, the Mets haven't hit. They have won playing stellar defense and getting consistent pitching from their starters and surprising production from most of their bullpen.

The question is whether the Amazins can keep up their winning ways with such an anemic offense.

To answer that question, I decided to compare the Mets hitting performance to their overall winning percentage over the team's 53 year history. Weighted runs created plus (wRC+) allows us to compare hitting numbers across different seasons. It measures total offensive production by taking into account a broad array of offensive statistics in a league and park adjusted context. The Mets at Citi Field gain no disadvantage to the Mets who played at Shea. Or the Mets in the steroids era gain no advantage to the Mets who played in more pitcher-friendly times.

It is clear to see in the chart below that there is a strong relationship between hitting and winning. Makes sense. Teams with high overall offensive production generally fare better than teams who don't hit. Which is where the 2014 team becomes an early outlier. Obviously, over 26 games, it is difficult to compare this season to full seasons of the past, but we can at least use the comparison to see where the 2014 team would fall off the curve if they continued their poor hitting and surprising winning. 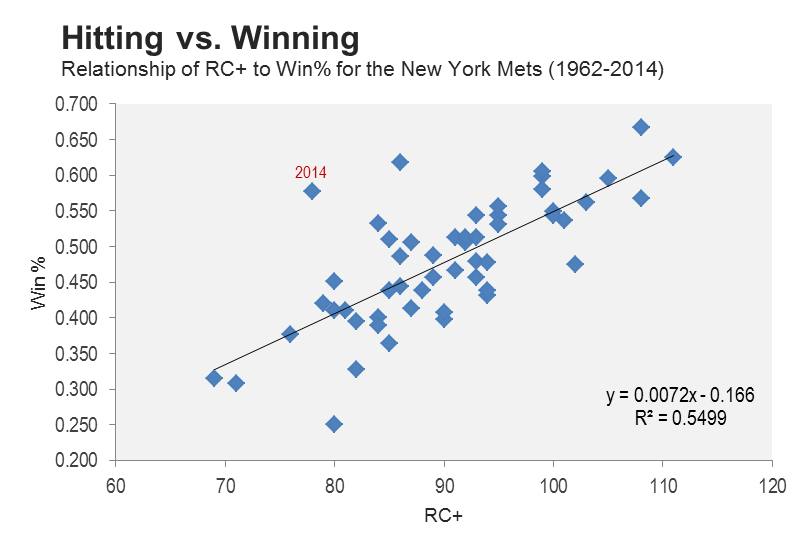 The 1969 Mets provide the best example of a team who didn't hit, and yet won. But even that squad hit more than the current season's team who are hitting a measly 78 wRC+. In 1969, the Mets hit for an 86 wRC+, which is the lowest of a Mets team with at least a .577 winning percentage - the current winning percentage of the 2014 Mets. Of course, 1969 was the year Amazin' was added to the Mets lexicon and Tom Seaver and Jerry Koosman proved that the new National League team of New York would be one marked by pitching. While pitching may be the franchise's identity, hitting is still necessary to win.

Now that we have looked at the Mets history of hitting versus winning, how about the rest of baseball? The relationship is the same using a broader sample. Taking all major league individual seasons between 1996-2013, we find that teams with higher wRC+ win more often. We also find that if the 2014 Mets keep their current 78 wRC+ pace, they would be in historically bad company, and destined to an abysmal finish.

2014 was supposed to be the year the Mets finally returned to prominence. Then Matt Harvey got hurt, the team failed to make one or two more big moves to put them over the top, and they are left with Ruben Tejada as the shortstop, Curtis Granderson as the marquee signing who hasn't hit a lick (batting .135 heading into Thursday), and a fifteen win April that defies logic. I took a chance writing about my favorite team's overall play. I wish the numbers would lie. But if the Mets want to make 2014 a competitive campaign, they better start hitting soon.