Carlos Gomez' walk rate has increased. Do the data support a sustainable increase?

Share All sharing options for: Carlos Gomez and plate discipline

Carlos Gomez is a good baseball player. He had a breakout 2013 campaign in which he garnered 7.6 fWAR through being good at EVERYTHING. Or, at least, mostly everything. The one knock on his game has been a lack of plate discipline, exemplified by his 6.3% walk rate and 24.7% strikeout rate last year. This year, it appears that he might have added a new tool—Gomez is sporting a 9.1% walk rate and a shiny .369 OBP, both by far the highest of his career.

Both sets of numbers agree that he's seen fewer pitches in the zone than 2013, with the difference much larger with the PITCHf/x system. This makes intuitive sense; Gomez had a big year at the plate last year, so pitchers don't want to give him good pitches. That would help explain the walk rate increase.

One system sees a decrease in O-Swing%, while the other sees an increase. The numbers are basically flip-flopped; the difference is small, though. I'm not confident in asserting that he is swinging at pitches outside the strike zone more or less than 2013.

Where there is an interesting difference is in the O-Contact rate. While both systems have a similar number in the low 50s, the BIS system sees a drastic reduction where the PITCHf/x system does not. If Gomez is making less contact with pitches outside the zone, that could extend some plate appearances when he misses with fewer than two strikes and allow him to take a walk or make contact with a better pitch. This could be helping his walk rate.

After all this examination, have we learned anything? Well, maybe. If Gomez is indeed seeing fewer pitches in the zone, and making less contact with all pitches, it would make sense that his walk rate and strikeout rate are up. His ISO and BABIP are up, so it seems plausible that when he does make contact, he's making contact with better pitches.

Investigating further, I ventured over to Brooks Baseball to double check. The first set of pictures is his swing rate by section of the zone. The first pictures is 2013, and the second picture is 2014. 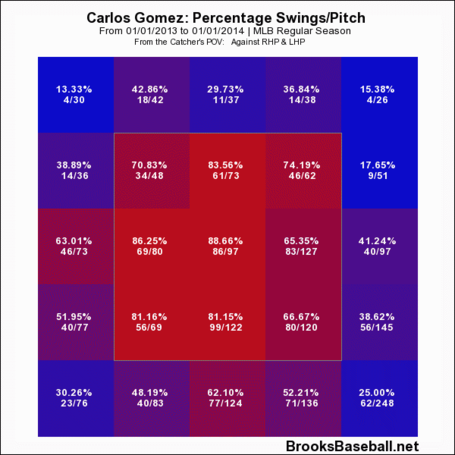 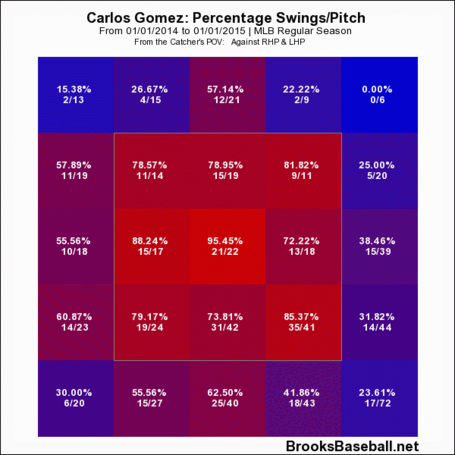 It doesn't look like there is any significant change. If anything, he might be swinging more at inside pitches out of the zone and possibly some more pitches up and out of the zone, specifically, in that center column above the zone. 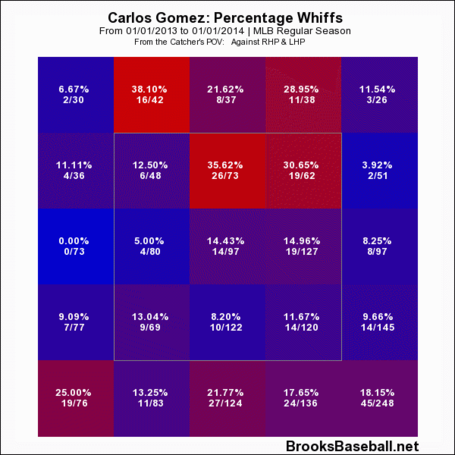 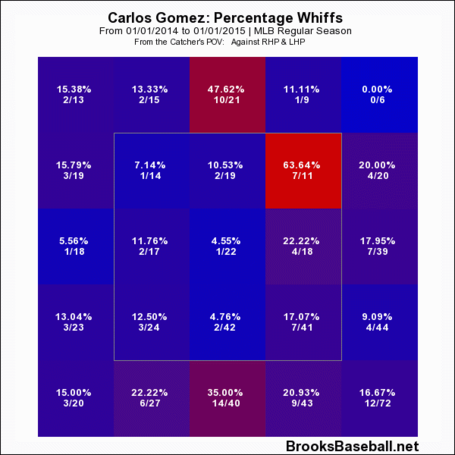 After looking at all these data, it's difficult to make a firm conclusion on whether or not Gomez has improved his plate discipline. There is some evidence from BIS and PITCHf/x that he is making less contact. Those pictures from Brooks Baseball seem less enthusiastic about a swing rate improvement, but show that he is whiffing more outside the zone, particularly on low pitches and outside pitches. He also appears to be whiffing less inside the zone. The rest of season projections are not optimistic about Gomez retaining his new walk rate, with both Steamer and ZiPS predicting a 7.3% walk rate at the end of the season.

If the increased walk rate is simply due to lack of contact, maybe Gomez hasn't changed his approach at all. Maybe he altered his swing plane for more power, or perhaps this is just small sample noise. A more disciplined Gomez would be terrifying; a relatively unchanged Gomez is still scary. Scary is still good for the Brewers.

Kevin Ruprecht is a Featured Writer for Beyond the Box Score. He also writes at Royal Stats for Everyone. You can follow him on Twitter at @KevinRuprecht.