Adam LaRoche's quad strain and its effects on his hitting

How has Adam LaRoche's recent quad injury affected his swing and hot start to the season?

Share All sharing options for: Adam LaRoche's quad strain and its effects on his hitting

Usually dormant during the first few weeks of a season, the sweet lefty swing of Adam LaRoche has been on display right out of the gate in 2014 and in doing so, leading a Washington Nationals offensive attack missing a pair of key figures in their lineup—Bryce Harper and Ryan Zimmerman. A career .317 wOBA hitter during the early March/April swing, LaRoche got off to a hot start, hitting at a .405 wOBA clip for his first 32 games and 133 plate appearances in 2014, good for a 160 wRC+. A notorious dead-pull hitter, LaRoche's season so far has also been marked by a handful of defensive shift busting opposite field hits. Sadly, the hot start to LaRoche's season came screeching to a halt recently, suffering a right quadriceps muscle strain, leading him to join Harper and Zimmerman on the 15-day disabled list. While the injury is mild and shouldn't affect LaRoche's chances of a continued strong showing at the plate upon his return, it still brings the potential to subtly disrupt timing and performance.

How did the quad injury affect LaRoche and his swing, if at all? Before we discuss ALR's productivity pre and post injury, let's review some of the anatomical and biomechanical aspects of the quadriceps and their role in swing mechanics.

To start, quadriceps femoris is a collection of four muscle groups—the rectus femoris, the vastus lateralis, vastus medialis, and vastus intermedius. The rectus femoris is the most superficial muscle and sits atop the other three muscles; it is the most commonly injured of the quartet. The other three muscles are just below the rectus femoris, with the vastus medialis sitting medially to the femur bone, the vastus laterlis lateral to the femur, and the vastus intermedius deep to the other muscles, sitting atop the femur. Collectively, the quadriceps originate at the spine of the pelvis, and inserts (or ends) on the tibia bone (more specifically, the tibial tuberosity), by way of the patella, giving way to the patellar tendon inserting onto the tibia bone. It is a biarticulate muscle due to it spanning both the hip and knee joints—this allows it to serve as an extensor of the knee as well as a hip flexor. A such, the quad plays a large role in walking, running, jumping, squatting, and the stabilization of the knee joint during these actions.

From a hitting perspective, the quadriceps play a significant role in lower body mechanics, assisting in hip flexion to varying degrees in the preparatory phase of the swing, depending on a hitter's preference for hip flexion. With LaRoche's right hamstring injured, and part of his lead leg with respect to his swing, it isn't until the stride of the lead leg and the transition from the preparatory to acceleration phase of the swing that a nagging quad becomes potentially problematic. With an open stance, the stride plays a larger role in LaRoche's swing compared to many of his contemporaries, who employ wider stances that have little to no stride involved. As LaRoche strides into the swing, his front foot strides out, closing up his hips, with his weight shifted to where the vast majority of it is on the right leg. From here, his right leg firms up, with the help of his quad extending the knee and stabilizing the leg, allowing his hips to rotate towards the ball and accelerate rapidly in order to get his hands through the swing plane. In the follow-through phase of his swing, rotation of the hips continues, with some flexion and slight adduction finishing up the swing with all of his weight completely transferred to the lead leg, with the leg at maximal extension, and swing deceleration continues.

With the anatomical and mechanical points covered, where could a hamstring strain potentially affect a swing? While LaRoche himself has said that the injury didn't greatly affect his hitting and that playing the field and running were the primary sources of pain and aggravation, looking at some of his batted ball and PITCHf/x data does show some potential clues that the strain was somewhat bothersome for him at the plate.

First, let's look at his swing tendencies before the injury became unbearable—here, I have used an estimated date of initial injury of April 29, consistent with original injury reports coming from LaRoche and the Nationals: 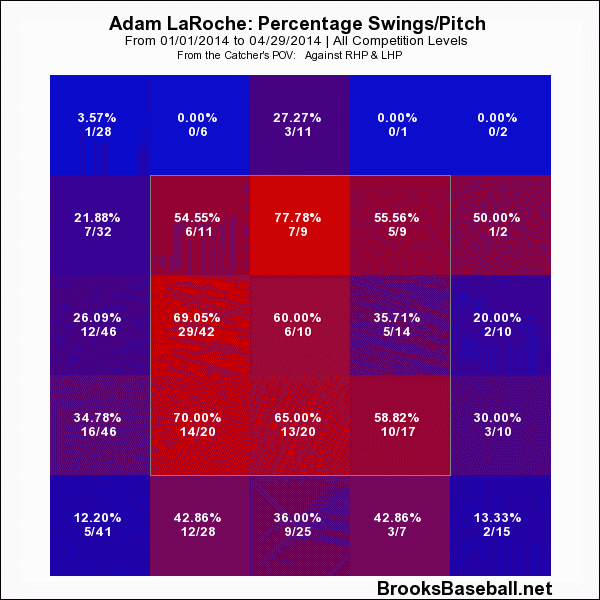 Now, compared that to his injured at bats early in May, just before hitting the DL: 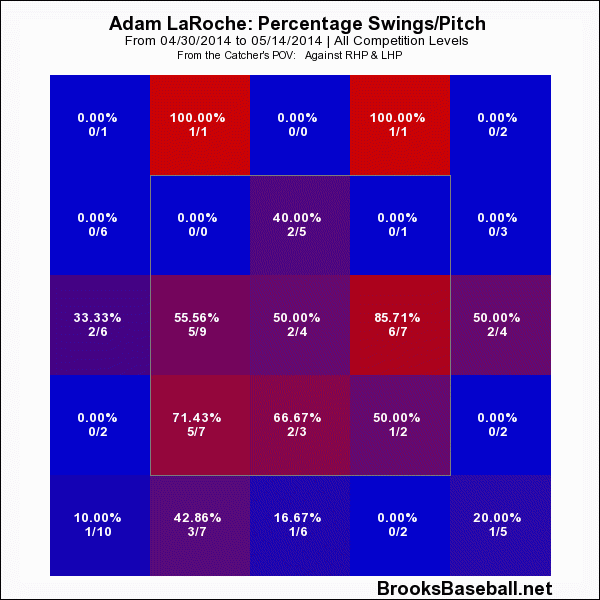 Here, we see LaRoche not as aggressive with pitches down in the zone or on the inside half of the plate. This is fairly consistent with him potentially having issues with fully extending his lead leg, allowing for full hip rotation through his swing, critical to getting his hands inside pitches in the inside part of the plate. Pain in the quad while trying to flex at the hip and knee when trying to get to pitches low in the zone and on the outside corner could also have been an issue, looking at these heat maps.

Let's now look at LaRoche's spray chart before the injury: 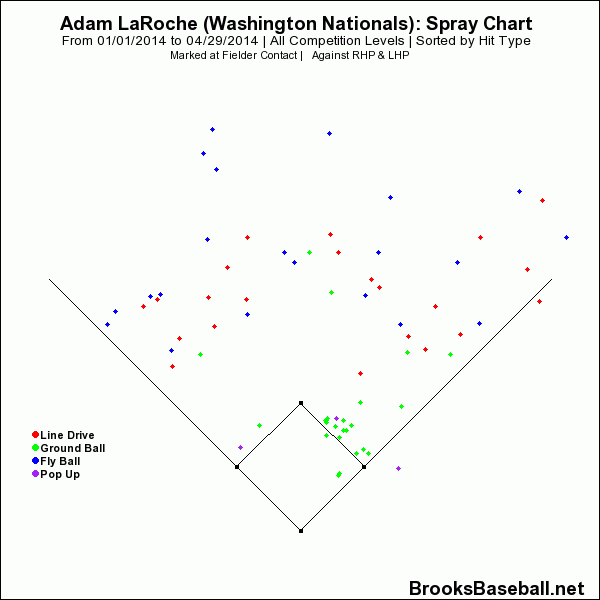 Here, we see LaRoche's work to counter many of the defensive shifts he has seen over his career paying off, with a relatively even spread of batted balls to all fields, without much evidence of his pull tendencies.

Now, let turn to his batted ball data after hurting the quad: 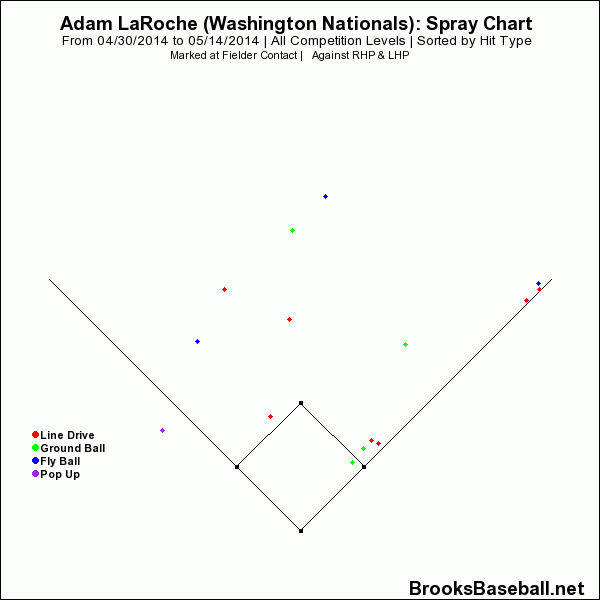 Still taking LaRoche shift-busting approach into consideration, we do see in the handful of at bats with this injury that LaRoche didn't turn on as many pitches as he was before the quad strain and the limited range of knee extension encountered from the injury, with the vast majority of his work going into left-center field. While there isn't a large amount of data to work with here, it does remain consistent with the aforementioned mechanical inconsistencies that could potentially be seen with a hitter suffering from a quad injury. Thankfully for LaRoche, the injury sustained wasn't severe and the time off the field and off his leg combined with rehab comprised of stretching and strengthening exercises should have the first baseman back in the Nationals lineup and continuing to ride his hot start into the summer months.