Dan Uggla's plate discipline is, arguably, quite good. But he is failing to capitalize on the benefits of that discipline more and more.

Enter Dan Uggla. Nearly league average when he broke in with the Marlins as a Rule 5 pick, Uggla's O-Swing% has stayed pretty much the same (minus a spike in 2011), despite the dramatic shift in the sport:

Uggla has been an above average hitter in his career despite low batting averages; 2013 was the first season in which he slipped below 100 wRC+ (91), and his career mark is still 111. Not bad for a second baseman. But while not swinging at pitches outside the strike zone is not the only way to be selective at the plate, there are really only two possible benefits to a low O-Swing%: a higher walk rate, and doing more with the (probably in-zone) pitches one does swing at.

Uggla does, indeed, have a good walk rate. Here's how his career compares to league average: 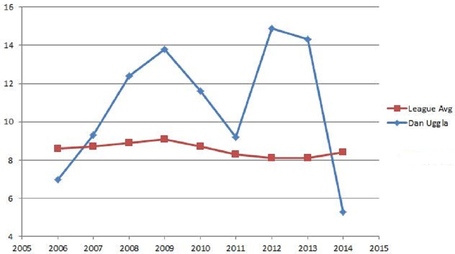 Three percentage points on BB% is roughly equivalent to 30 points of OBP, which is a significant swing. If Uggla is the 14% BB% hitter he was in 2012 and 2013, that alone is enough to make an otherwise mediocre hitter average. Kudos to Uggla!

Strikeouts up, but single-game record intact

Strikeouts are on the rise, but the 20-K record hasn't been threatened in a while.

Strikeouts up, but single-game record intact

But the other way that a low O-Swing% would be expected to help a hitter's output should be that more of the hitter's swings would be at in-zone pitches -- and it should be easier to hit in-zone pitches, and to hit them well. After all, the league average Z-Contact% has been more than 20 percentage points higher than the average O-Contact% in almost all of the last nine years. And while Uggla was never a particularly accurate swinger, that part of his game appears to be eroding.

He did have pop-ups, though: in his three full seasons with the Braves, Uggla has had infield fly ball rates above 10%, including 16.9% in 2012 and 13.6% in 2013. And that may be the principal sign that Uggla is getting less accurate with his swings. Here's his batted ball rates from his eight full seasons (with IFFB% represented as a true percentage of his in-play contact, and FB% adjusted accordingly):

Although Uggla's FB% has stayed pretty static, he's just had a couple of outlier seasons in terms of LD%. While looking at Uggla's GB%, note that league-wide, GB% has been going up. Hitters who sell out for power may tend to miss more -- sort of like how one might be less accurate with a hammer when holding the handle all the way at the end. But even a hitter like Uggla can see his precision with the bat erode. Here is the same data in graph form: 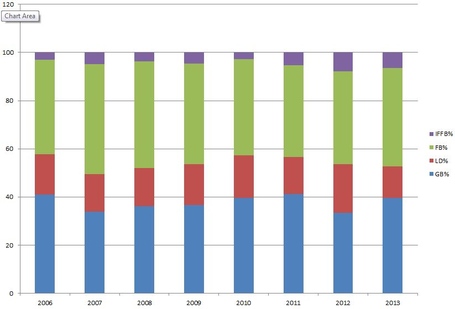 LD% (and GB%, FB%, etc.) is primarily about launch angle, and although I don't have such access, it would be nice to look at whether Uggla's swings have been accurate horizontally, as well (i.e., how well he barrelled up the ball). Still, it appears that a decrease in precision with his swings may be responsible for his decrease in Contact% -- despite the fact that a high proportion of his swings are at in-zone pitches. The idea that he's getting less precise with his swings is also supported by an increase in swinging strike percentage (last five years): 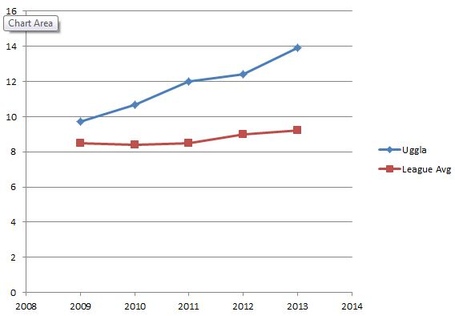 Uggla is not far removed from a 3.3 fWAR season in 2012, and so it's hard to blame the Braves for waiting it out to see if last year's 0.5 fWAR performance was a blip on the radar or a sign of things to come. So far this season, Uggla has rallied a bit with a higher-than-2013 LD% (17.8%) and a lower-than-2013 IFFB% (6.7%, or 2.8% of in-play contact). His 2014 GB/FB ratio, though, is as high as it's ever been (1.00), and combining that knowledge with the decrease in infield fly balls makes one wonder if Uggla isn't aiming the bat under the ball quite as much this season as he has in the past. If so, the results (46 wRC+) haven't justified the different approach.