Instead of just complaining about how useless the pitching win is, can it be improved? Cubs broadcaster Len Kasper has a way.

I listen to 670 The Score in Chicago for my sports information, and last Thursday (May 8th), Cubs TV play-by-play announcer Len Kasper was on the McNeil and Spiegel Show. Host Matt Spiegel and guest host Laurence Holmes were discussing the fate of Jeff Samardzija so far this year, who to date has eight starts, seven quality starts, a 1.45 ERA . . . and zero wins. Len went on to discuss one way to revamp the win-loss record:

@ScottLindholm Best idea for W/L would be eliminate cheap wins & tough losses from every guy's rec. Would at least get closer to reality.

@ScottLindholm So you're throwing out losses in games you pitch well (ND instead), & eliminating wins when you stink (those become NDs too)

It took me a couple tweets to get it right, but in essence Len is suggesting recalibrating wins and losses to better reflect pitcher performance. Len went on to write about this in a column in Sunday's Daily Herald.

The link in my first tweet goes to a page at Baseball-Reference.com that tabulates and defines cheap wins and tough losses for starting pitchers:

Cheap wins--Wins in starts with < 6 IP or more than 3 ER. Or wins in non-quality starts.

Part of my discussion with Len involved Cubs pitcher Travis Wood, who has the following numbers so far in his career:

Last year was typical for Wood -- 32 games started, 24 quality starts, 3.11 ERA and a 9-12 record to show for it. Using Len's transformation, Wood's career numbers would change from 28-39 to 27-25. Reviewed using traditional measures, Wood appears average at best, but changing the view toward one based on what Wood can control depicts a more effective pitcher, one with a winning percent far exceeding his team's -- .519 vs. the Cubs .386.

This data is available going back to 1938, and this table shows pitchers most helped by this change since 2000, with explanation to follow (minimum 100 games started):

Wa=adjusted wins, subtracting the cheap wins from the actual, leaving wins that were also a quality start. La likewise removed the tough losses, with Wa% the adjusted winning percent for the pitcher. The table is sorted by win percent difference (W%d) of the two methods, showing Josh Johnson as the pitcher most penalized by playing for teams that gave him no run support, followed closely by Jordan Zimmermann, Clayton Kershaw and . . . Travis Wood.

Some time ago I saw a tweet from MLB Historian John Thorn regarding the win in early baseball history -- my memory was hazy, and he was kind enough to set me straight:

@ScottLindholm ERA was made official in the AL 1913. Ban Johnson loved it, told official scorers not to record wins or losses (thru 1919).

Almost one hundred years ago the man who was the first commissioner of the American League saw the win as inferior to other more informative measures. He was foresighted enough to see this even when pitchers were completing a fair number of games started -- look how that percentage has changed over time: 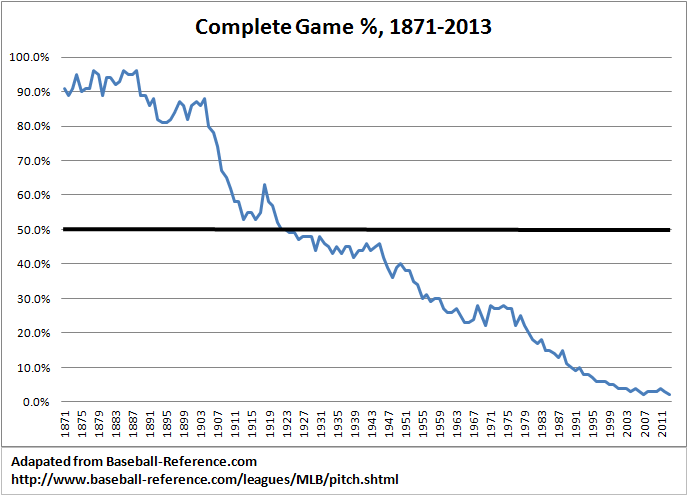 It's been almost one hundred years since pitchers completed even half of their games and almost forty since completing twenty-five percent -- Old Hoss Radbourn left the building a long, long time ago.

Baseball front offices left the win behind as a meaningful measuring stick of pitcher effectiveness years ago and understand the failure to score runs shouldn't be blamed on the pitcher. This message is gradually spreading, but it's still not uncommon to hear people complain how the win is still relevant. I'm sure Jeff Samardzija is bothered to not have any wins, but he knows it's not due to any true shortcomings on his part, and his agent (Mark Rodgers) is certainly aware of how Cubs losses in Samardzija's starts stem from the fact the Cubs have given him the worst run support among starting pitchers in all of baseball.

It's a tough battle, but with broadcasters like Len Kasper and his partner Jim Deshaies who don't just call the game but attempt to explain and enhance the viewers knowledge, it's one that will be won. I admire what Len did in not just complaining about an archaic stat but making it better and more informative as well.

As I was writing this post, I received a tweet from one of my favorite people to follows on Twitter, HighHeatStats, who suggested I look at starter effectiveness in a different way. I gathered the data, and to say my mind has been opened is an understatement. I'll write about it next Monday.

Data from Baseball-Reference.com. Any mistakes in amalgamating it are the author's. Special thanks to Len Kasper for taking the time to discuss this with me.

Scott Lindholm lives in Davenport, IA and has been waiting 'til next year for the better part of his life. Follow him on Twitter @ScottLindholm.